The title of this article is ambiguous. Further meanings are listed under Iron Gate (disambiguation) .

Course of the Danube with the Iron Gate

The monastery up close

The Iron Gate ( Serbian Ђердап Đerdap ; Romanian Porțile de Fier ) is a breakthrough valley on the Danube . It is located in the southern Carpathians , more precisely between the Serbian Carpathians and the Banat Mountains , on the border between Serbia and Romania . Until it was defused in 1972 in connection with the Eisernes Tor 1 power plant , it was considered to be the most dangerous section of the Danube for shipping , which could not be passed without a local pilot . For decades, the ships were upriver with locomotives towed .

The Iron Gate is one of the most imposing valley openings in Europe. At the Cazan or Kazan (German basin ) between the cities of Orșova and Donji Milanovac , the Danube is narrowed to 200 meters wide; in this section it was already 50 m deep before the dam was built, so that the bottom of the water is 15 m below sea level. Because of the steep walls of the gorge, today's reservoir is not much wider than the natural river bed, despite the rise in the water level (at the dam by 20 m to 62 m above sea level). Protected areas have been set up on both sides of the Danube - the Đerdap National Park in Serbia , and the Iron Gate Nature Park ( Parcul Natural Porțile de Fier ) on the Romanian side .

The most famous towns near the Iron Gate next Orşova are Moldova Noua , Drobeta Turnu Severin (Romania) - where a museum tells the story of the power plant "de Portile Fier" - and Golubac with its located on the banks of the Danube fortress Golubac , Donji Milanovac , Tekija and Kladovo in Serbia .

In the area of ​​the Iron Gate are the two run-of-river power stations Iron Gate 1 (Đerdap I) and Iron Gate 2 (Đerdap II). Serbia is planning a third, small Iron Gate 3 power plant . As a result of the construction work for the Eisernes Tor 1 power plant, some neighboring villages and the island of Ada Kaleh sank in 1971, even before the Danube was put into operation .

Situation for shipping traffic before the construction of the dams 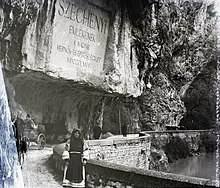 Inscription in memory of the builder of the road

The winding section of the Danube, which breaks through several mountain ridges, from the Romanian city of Moldova Nouă to shortly before Drobeta Turnu Severin extends over a length of about 120 kilometers. In the course of its course, several cataracts had a major impact on shipping before the construction of the barrage systems at the Iron Gate, where there was also a temporary cessation of traffic at low tide. The largely gorge-like valley flanks or steep walls as well as some side valleys create an unusual river landscape in the overall picture. Because the Danube has been a major European waterway at least since the Roman Empire, there were historically significant events here, including armed border conflicts (1692 and 1788, Austria against the Ottoman Empire ). For a long time there was a border triangle between Hungary, Romania and Serbia not far from the Iron Gate at Orșova , where there was a border crossing for the road and later rail connection between the first two states. The border station between the then Kingdom of Hungary and the Kingdom of Romania was in Vârciorova , at the level of the fortified and now flooded island of Ada Kaleh .

Between 1833 and 1837 a national road was built on the left bank of the Danube (today about the DN57 ), which was later named after the initiator of its construction, Count István Széchenyi . In his honor, the István Széchenyi tablet was created as a rock inscription near the former place Plavisevicza (now flooded, upstream near Dubova at the beginning of the great Kazan ). In the meantime, Pál Vásárhelyi had carried out extensive surveying work in the valley and recorded the position of the rocks in the course of the Danube as precisely as possible. In addition, the unusual low water in October 1834 was used for stone-breaking work in particularly dangerous places. In this way, about 4,000 cubic meters of rock could be removed from the shipping line with manual stone crushing and small sewer work could be carried out in the village of Dojke (flooded today, near the DC47 branch of the DN57). The regulation work on the river bed, which was not carried out extensively until the end of the 19th century, began with a ceremony on September 18, 1890 and was largely completed by December 31, 1895.

In detail, 6 sections of the course of the Danube in this region were of critical importance for shipping (list downriver) and on which corresponding work took place:

During the current regulation work in the 19th century, considerable volumes of rock were removed from the river on all of these rock banks by underwater blasting or targeted quarrying (exposure through temporary dams). In addition, the construction of such temporary protective dams resulted in a short-term massive demand for rubble stones , which could be covered by the construction of new quarries on the Serbian bank. In addition to this work, the river cross-section was narrowed in some places by dams running parallel to the bank in order to permanently enforce a water depth suitable for shipping.

The most dangerous area for the earlier shipping traffic begins downstream at the now flooded island of Ada Kaleh with a narrow limestone band running from the Romanian bank at a shallow angle towards the western bank (Serbia). This is followed with increasing width parallel rock banks made of heavily folded clay slate and limestone slate, which merge into limestone containing mica and quartz fragments, the Prigrada Bank . This rock bank extends with a length of about 3 kilometers from bank to bank through the river valley and forms the actual Iron Gate. A little below these rock thresholds, metamorphic crystalline rocks cross the river bed, the highest zones of which formerly formed further dangerous rock groups, the Small Iron Gate . These rock groups are biotite-containing quartzites and a mica schist (Schafarzik: "slate, fine-grain granite") that could protrude from the Danube depending on the seasonal water level.

In 2005, Serbian archaeologists discovered the remains of an approximately 9,000 year old settlement in the east of the country. The site is in an inaccessible cave above the Danube. So far (as of 2012) remains of fire pits and flat stones that served as anvils have been excavated. In addition, numerous bones of fish and other animals were found. The site is not far from Lepenski Vir , a site from the Mesolithic , where a more than 8,500 year old settlement with graves and artistic sculptures was discovered in the 1960s.

Tabula Traiana on the Serbian side

A well-known Roman testimony is the Tabula Traiana carved into the rock at the Iron Gate on the Serbian side of the Danube. This is a plaque that the Roman Emperor Trajan had installed on the right-hand side in the lower gorge of the Danube in 100 when the road construction was completed. Floating dolphins are depicted on both sides of the double-rimmed table, at the top an eagle with open wings glides, on the right and left three six-petalled roses are carved into the stone as reliefs. In the course of the construction work for the power plant, the table was moved to a higher location due to the future rising water level of the Danube in order to preserve it in this way. Since then it has only been visible from the water.

No longer visible, because it has been flooded, is a 3.2 km long sluice canal created by the Romans along the right bank of the Danube to bypass the Prigrada rock bar in the river bed .

In the years 102 to 105, the important Roman architect Apollodor of Damascus built the Trajan's Bridge in the valley breakthrough a little further downstream, at today's place Drobeta Turnu Severin , thereby extending a strategically important Roman road beyond the then border river. The bridge, which was the longest in the ancient world, was soon used for the invasion of Dacia in the Second Dacian War 105/106. With the annexation of Dacia as a Roman province, the border of the Roman Empire was pushed beyond the Danube.

The two still visible towers of the castle ruins in the water of the dammed Danube.

The fortress of three towers, Cetatea Tricule , built in the late Middle Ages , four kilometers downstream from the town of Svinița in the Mehedinți district on the Romanian shore, was partially flooded by the damming of the lock on the Iron Gate 1 power plant and threatens to collapse in a few years without safety measures.

At the Berlin Congress in 1878 Austria-Hungary was entrusted with the regulation of the Danube route at the Iron Gate. The Hungarian government had the construction work carried out under the direction of Ernst von Wallandt in the years 1890-1896 at high cost and overcoming major technical difficulties. The regulated stretch of the Danube at the Iron Gate was opened on September 27, 1896 by Emperor Franz Joseph I of Austria . Also present were the neighboring sovereigns, the kings of Serbia and Romania.

The regulation work consisted of an almost 8 km long, 3 m below the lowest water level reaching canal through the rapids on the side of the Danube facing Serbia. The canal was divided into two parts, a 6 km long underwater channel leading into the area of ​​the Kazan rocky area (the Turkish word Kazan means cooking kettle ), which was marked by buoys, and a lower part about 1700 m long, which was bordered by 12 m high embankments made of stone blocks and 150 m wide. To build the upper part of the canal, 253,000 m³, the lower part 400,000 m³ of rock had to be blasted. The high flow speed in this "Iron Gate Canal" or Serbian "Sip Canal" made the ascent of the steamships of the time considerably more difficult, so that two tugboats were stationed there for the purpose of pre-tensioning.

During the First World War , the Central Powers built a standard-gauge towing railway on the right Serbian bank of the Danube , which was not connected to the rest of the railway network. It was in service until the 1960s to pull cargo ships upstream. In 1918/20 Serbia became the heartland of the Kingdom of Serbs, Croats and Slovenes , since 1929 Kingdom of Yugoslavia.

Fighting in WWII and development after

The strategic importance of the Iron Gate also played a role in World War II . Fighting took place there during the German Balkan campaign in spring 1941; the Yugoslav army tried in vain to prevent the invasion of the German armed forces . From 1941 to autumn 1944 Romania and the Wehrmacht-occupied Serbia were the states bordering the Iron Gate. In 1944, Yugoslavia was restored as a federal republic and since then has shared the border with Romania again. Due to the disintegration of the multi-ethnic state, the Iron Gate has been a part of Serbia and Romania since the 1990s.