Representation from the 16th century: Treideln on the Rhine 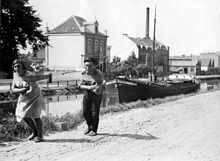 Towing with human strength in the Netherlands (1931) 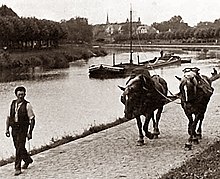 Towing with draft horses on a towpath on the Finow Canal , around 1890

Ships were usually only grained upstream and propelled downstream by the current or the wind. In some sections, such as in front of locks - in France on canals also on longer stretches - technical aids were also used, including tow locomotives, as is still the case today on the Panama Canal, or tractors on the Rhine-Marne Canal . In places with particularly strong currents (e.g. under bridges), fixed cable winches were sometimes used, such as B. the passage of ships at the stone bridge in Regensburg .

The paths of the ship pullers were called towpath , towpath, Reckweg, Bomätscherpfad or, in the Danube region, Treppelpfad or Treppelweg. The advent of steam power enabled rail transport and alternatives in shipping. In the inland navigation began with the chain and rope shipping, here is the tractor on a chain or rope moved forward behind up to ten barges . Later paddle steamers - from around 1920 increasingly motor tugs - pulled the barges. From around 1950 they were increasingly replaced by self-propelled motor ships .

In the Habsburg hereditary lands , ship pulling was imposed as a punishment from 1783 to 1790, after Joseph II had practically abolished the death penalty as part of the Josephine penal reform. Of the 1173 convicts who were sentenced to towing between 1784 and 1789, 721 died by 1790.

Towing was hard work even for draft animals . On old engravings and paintings, the towing horses and their riders appear quite romantic in an idyllic setting. In fact, the working conditions for animals and humans were extremely hard and laborious and anything but tranquil.

Haulage service on the Rhine , pen drawing by Wenceslaus Hollar , 1636

Treideln on the Rhine has been documented since the 8th century. In the northern Upper Rhine, towing near Nieder-Ingelheim has been proven from 1385. The construction and maintenance of the towpaths and the towing service were organized locally. Towhands pulled the ships upstream on long ropes attached to a mast on the foredeck (the so-called "tow mast") or led a draft animal. The leash riders (also leash riders) pulled the ropes off horses. The rider always sat on one side of the horse so that he could jump off quickly in an emergency. Towers and leash riders always carried an ax or knife with them so that they could cut the tow rope in case of danger. People and animals were taken care of in the towing stations . Sometimes the ships were also pounded with long poles . Due to the inertia of the broad river, seven to ten men or a horse were often enough for loads of 10 to 15 tons. Ten to twelve horses were needed for 100 tons of freight. In places with strong currents, more than two hundred men were often needed to tow a cargo ship. Before this time, the Romans also used to grain here. The maintenance of the towpaths, which often only consisted of narrow billet dams, often gave rise to complaints. In some places - for example at Schröck (today Leopoldshafen / Baden) - towpaths were completely missing and you had to poke or wade through shallow water.

Since the Middle Ages, Weser barges such as Eken , Bukken , Bockschiffe or Bullen have been tugged against the current or punted on very short stretches on the Weser . On the descent , due to the sufficient current of the river, boots were booted . At the beginning of the 17th century the Weserschiffer Jost Ziegenhirt became one of the richest citizens of the town of Höxter through trading with Bremen. The tradition of the "Bremen drivers" in the Upper Weser region goes back to the 15th century. Between 1696 and 1818 the human train on the Weser was replaced by the horse-drawn line train.

Channels of the Fehn culture in the Emsland

Grained ship on the moor canal in Papenburg

Canals (wijken) were dug in the Fehn culture in Emsland. The peat was transported on them. The ships were grained.

Two horse-drawn tow boats ( Elfriede and Alma Viktoria ) are in use on a section of the Ludwig-Danube-Main Canal for tourist purposes .

Especially in France , where numerous navigable canals were built from the 17th century, ships were often hauled through. Canals such as the Canal du Midi , completed in 1694 , where people and horses were used to tread, still have towpaths on both sides. In the industrialized north and east of the country, the testing and construction of mechanical towing systems began around 1900. Towing railways were built over a length of more than 1000 km or towing was done with rubber-tyred tractors. 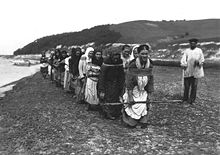 Burlak women towing along the Volga

On the Volga a towman was called a Burlak ( Russian Бурла́к ). The Burlaken were usually temporary workers who came together to form an Artel for a towing contract. The song of the Volga tugs is internationally known .

The towing on the Gudenå began at the latest with the transport of Jutland limestone . This was used in the construction of the Øm monastery , which was completed in 1172 on the upper reaches of the river. In the days before the railroad, overland transportation was time consuming and difficult. The condition of the roads and vehicles only allowed the transport of smaller quantities of goods, so that one turned to waterways. Caused by the construction of the “Silkeborg Papirfabrik”, the high time of towing on the Gudenå, which lasted from 1850 to 1880, began. About 120 barges operated on the river. Before the Gudenå was dredged in the 19th century, it was possible to travel from Randers to Silkeborg in a barge with a load capacity of 10 tons . The skipper hired two to three day laborers for the three-day ascent. The barge was pulled as far as Bjerringbro (approx. 30 km). Horses did the work in Bjerringbro because the incline was so steep that few men could not pull the boat. There was a risk of touchdown especially at sharp bends in the river. The boat could land here. The problem was solved by placing guide pulleys for the rope at the headlands. The end of towing was initiated with the opening of the railway line between Skanderborg and Silkeborg in 1871 and reached in 1921 after the construction of the Tangeværket power station.

On the US canals such as the Chesapeake and Ohio Canal or the Delaware Canal, mules were almost exclusively used as tow animals, as they combined the advantages of horses and donkeys for towing in an almost ideal way. A special feature of the towing operation on the US canals were the stables for the towing animals on board the ships. 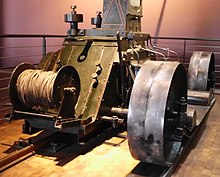 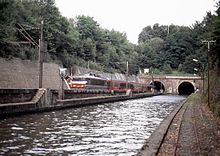 In the second half of the 19th century, the partial replacement of humans and animals in towing began with mechanical drives. The first steam-powered tow locomotives were used on the French Canal de Bourgogne in 1873 . They only ran on one side of a rail, the other side, however, rested on a track, similar to locomotives . Between 1898 and 1901 a corresponding electric towing locomotive developed by Carl Köttgen was tested by Siemens on the Finow Canal .

Instead of rail-bound vehicles, electrically powered three-wheeled tractors called “Cheval électrique” (electric horse) were also tested in France from 1896 to 1904 for towing. Its inventor, Michel Gaillot, had a 4 km long test section built on the Bourgogne Canal in 1895, including a small hydroelectric power station at lock 57. In 1900, 120 “Chevaux électriques” were already in use in France, including an 88 km towing route near Béthune . The 2.8 t heavy machines were supplied with a direct voltage of 300 V from overhead lines and pulled the ships at 2 to 3 km / h.

Another development consisted of fixed systems, which were limited in terms of route lengths and z. B. were used in ship tunnels. Stationary steam engines - later also electric motors - moved endless pulling ropes into which the towing ropes of the peniches were hung. In 1888 Maurice Lévy installed the first such system at the confluence of the Canal de Saint-Maurice and the Canal de Saint-Maur near Joinville-le-Pont . The system was first installed in a tunnel on the Canal de l'Aisne à la Marne in 1895 ( Tunnel du Mont de Billy near Billy-le-Grand ); this system was in operation until 1942.

In 1880 a four-axle steam locomotive weighing 14 t on meter gauge tracks was used between the Douai and Les Fontinettes locks . Due to ongoing technical difficulties, operations were stopped on February 1, 1886. In 1890 a two-axle steam locomotive was used on the Oder-Spree Canal on 900 mm wide tracks, which reached a towing speed of 7 km / h with up to seven barges. An economical operation was achieved, however.

At the beginning of the 20th century, towing began with two-axle electric locomotives , initially in 1902 on the Canal de la Sensée between Corbehem and Férin . The locomotives developed by the engineer Chanay, 61 of which were already in service in 1914, had similarities with the tow locomotives later built for the Niederfinow lock staircase. Of the latter, eight machines were delivered by Siemens-Schuckertwerke that year . As early as 1903, the Treidelbahn received its first tow locomotive from Siemens on the Teltow Canal, which was under construction.

The First World War initially brought other projects to a standstill. In 1918 France began using tracked vehicles that were no longer needed - including even disused battle tanks - for towing. In the early 1920s, Jean-Baptiste Chêneau developed a system in which the trolley- type electric tractor ran on steel cables or under an elevated lattice girder .

While mechanical towing was only marginally used in Germany, towing railways were built in France well into the 1930s. In 1934 an electrically operated towing system extended from Calais and Dunkirk to Huningue near Basel . As a rule, rail-bound systems with electrically operated tow locomotives were used on the main lines, some of which also came from German companies ( AEG - the company supplied 40 tow locomotives for the Canal du Rhône au Rhin to France and Deutz as reparations after the First World War ) , created. On many sections, ships without their own propulsion were required to use the tow traction, including the longest, the 396 km stretch from Abbecourt to Arzviller . On the less frequented canals of northern and eastern France, the expensive construction of such systems was avoided, where rubber-tyred tractors with internal combustion engines were often used for towing . Intermediate solutions with regard to the later construction of track systems also existed, e.g. B. on the Canal de la Marne au Rhin east of Nancy , electric tractors fed by overhead lines.

The increase in self-propelled ships with a simultaneous decline in cargo shipping led to the end of mechanical towing. The last tow sections in France were closed on October 1st, 1970. However, numerous towing vehicles - usually not operational - have been preserved as monuments.

An unusual towing railway was built in 1916 at the Iron Gate , a gorge-like narrow valley on the Danube . Steam locomotives were used there for towing on regular-gauge tracks. See → Treidelbahn at the Iron Gate

The towbars of the Panama Canal are still in operation . Electric rack-and-pinion locomotives pull seagoing ships through the locks on the Atlantic and Pacific .