The Chiemsee Railway in Bavaria is still operated at times with steam.

For railways and trams, the term meter gauge refers to a variant of the narrow gauge with a gauge of a thousand millimeters, i.e. one meter. With the exception of Antarctica , Oceania and North America , this gauge is found on all continents , often also as the gauge of the main railways . 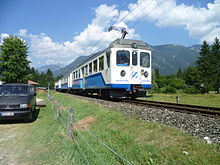 In Europe today, Spain has the largest meter gauge network, mainly in northern Spain. Until 2013, most of the lines were operated by FEVE , with over 1200 kilometers , which has since belonged to the state railway RENFE . Smaller parts are operated by regional companies, as in the Basque Country of EuskoTren . In the Peloponnese in Greece there was also a large meter-gauge network until the first years of the 21st century, but this is now largely out of service with the exception of two remaining stretches (see Organismos Sidirodromon Ellados ).

In Germany , the meter gauge was used for the first time on the Feldabahn and other branch lines such as the Chiemsee Railway and on trams . The largest contiguous meter gauge networks in Germany are operated by the Rhein-Neckar-Verkehrsgesellschaft (RNV) between the cities of Heidelberg , Mannheim and Ludwigshafen am Rhein with the Upper Rhine Railway (OEG) and the Rhein-Haardtbahn (RHB) as well as the Harzer Narrow Gauge Railways , whose network is linked to that of the Tram connected to Nordhausen .

The Attergaubahn is one of the few meter-gauge railway lines in Austria.

Electric locomotives of the Rhaetian Railway in Klosters station

In the Swiss Alps there is a meter-gauge network that runs from Graubünden to Valais and is operated by the Rhaetian Railway (RhB) and the Matterhorn-Gotthard Railway (MGB). B. the Glacier Express operate. This network also includes the longest meter- gauge tunnel in the world, the Vereina tunnel and the Furka base tunnel . In addition, there are smaller meter gauge networks or routes in almost all parts of Switzerland. In contrast to this, the Bosnian gauge of 760 millimeters is predominant in Austria . Only a few short tram-like meter-gauge local railways exist here, such as the Stubaitalbahn , the Innsbrucker Mittelgebirgsbahn , the Attergaubahn and the Traunseebahn . Meter-gauge trams operate in Gmunden and Innsbruck . The Pöstlingbergbahn was umgespurt mm after 100 years as a meter gauge railway in 2008 on the 900th From 1883 to 1932 the Mödling – Hinterbrühl local railway was the world's first electric railway in continuous operation. In the middle of the 19th century, the meter-gauge Rothwaldbahn and Waldbahn Langau – Lackenhof were used to transport wood .

Previously existing larger networks existed in France and northern Italy until around the end of the 1940s . In France there is only a larger network in Corsica , operated by the Chemins de fer de la Corse . The equally extensive, but only partially connected network of meter-gauge lines in Poland has been largely discontinued since 1990. 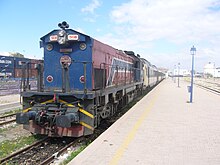 Diesel locomotive of SNCFT the station Sfax world, the terminus of the fastest meter gauge route 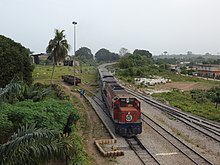 Part of the Indian railway network is meter gauge. Since 1992, these routes have been gradually changed to the local broad gauge as part of the Unigauge (standard gauge ) project of Indian Railways .

The Thai State Railroad operates a meter-gauge network of more than 4000 kilometers, which starts in a star shape from Bangkok. There are seven railway tunnels in the SRT network. The longest is the Khun-Tan-Tunnel on the Northern Railway with 1362 m.

In Vietnam , too , the railway is mainly operated as a meter-gauge railway. B. the more than 1700 kilometers long main line from Hanoi to Ho Chi Minh City (Saigon) as well as the Yunnan Railway from Hải Phòng via Hanoi to the Chinese border at Lào Cai and from there to Kunming for a total of 855 kilometers.

In Africa , several national and international routes have been built in meter gauge. One example is the Abidjan-Niger Railway between Ivory Coast and Burkina Faso in West Africa . There are other important meter gauge networks in Tanzania , Kenya and Uganda (see also Uganda Railway ). The largest meter -gauge locomotives in the world operated there with the Class 59 Garratt articulated locomotives of the former East African Railways . The adaptation of the network of the former EAR to the South African Cape Gauge Network was prepared by installing re-gauging steel sleepers and the procurement of vehicles designed for re-gauging, but never carried out.

The railway network of the Tunisian state railway SNCFT also largely consists of meter-gauge lines. In Tunisia there is a large meter gauge network south of Tunis, including the Tunis - Sfax railway line , which is the main axis in north-south traffic. The large clearance profile corresponds roughly to the European clearance profile for standard gauge. Passenger trains hauled by diesel locomotives run at speeds of up to 130 km / h, which is probably a record for meter gauge.

In South America there are extensive meter gauge networks in Argentina , Chile , Bolivia and Brazil, among others .

As with many narrow-gauge railways, the technical requirements of meter-gauge railways were often lower than those of standard- gauge railways . With smaller curve radii, railway lines built in meter gauge can be better adapted to the terrain. Bridges and tunnels can be dimensioned correspondingly smaller due to the usually smaller standard cross-section. On the other hand, the running smoothness and stability are lower, so that the meter gauge is poorly suited for high-speed roads.