The Uganda Railway (English: Uganda Railway ) is a railway line that connected Mombasa in Kenya on the Indian Ocean via Nairobi and Kampala with Kasese in Uganda . Today it is only in operation as far as Kampala. In addition, “ Uganda Railway ” is the name of the original operating company.

The curve at Mombasa in one of the first years of operation. 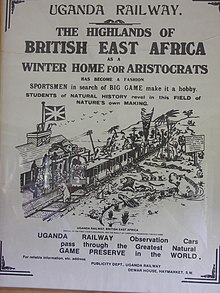 Advertising poster for the Uganda Railway

On August 14, 1896, the British Parliament created the legal and financial basis for the construction of the railway from the Indian Ocean to Lake Victoria , which began that same year. The construction was not without controversy. Opponents called the route Lunatic Line ( English for: "route of madness").

The railway was a British instrument in the " race for Africa ". It opened up inner-African territory, which at the beginning of its construction was still largely autonomous and indigenous , and to which the European rival powers had no access. The development of this area with the most modern and efficient means of transport at the time enabled Great Britain to rule in what would later become Kenya and Uganda within a few years. The cost of construction - initially estimated at £ 3 million - ended up being £ 5 million; including the cost of the port and shipyard facilities in Kisumu and the steamers operating on Lake Victoria: around £ 6.5 million. They were raised from the motherland of what was then the Protectorate of British East Africa .

Due to the supposed time pressure that resulted from the requirement to establish British rule in the area of ​​northern Lake Victoria and the sources of the Nile as quickly as possible, little consideration was given to the interests of the workers or the indigenous population during the construction. The long-term goal was to obtain a safe land connection for troop transports to India , even in the event of the Suez Canal being blocked .

The Indian entrepreneur Alibhoy Mulla Jeevanjee , owner of the company AM Jeevanjee & Co , signed a contract in 1895 in which he undertook to place 30,000 Indian workers in the construction of the railway and to provide food during construction. Most of the workers were recruited from British India . Their working conditions were poor, with around a third of the workers perishing due to illness, poor care and inadequate working conditions. Attacks by lions also claimed victims. In the most serious incident of its kind, 28 workers were killed during the construction of the bridge over the Tsavo . This was later discussed in the book The Man-Eaters of Tsavo and the films Bwana Devil and The Spirit and Darkness , among others . About 6,700 of the Indian workers stayed in Uganda and achieved - mostly as traders - relative prosperity within Ugandan society until the dictator Idi Amin ordered the expulsion of all Asians in 1972.

The indigenous population suffered from attacks and the diseases brought in by the workers, which resulted in the death of 20 to 50% of the population. Resistance was broken by force. The most famous incidents were the Kedong massacre , when the Maasai slaughtered 500 railroad workers after the rape of two girls and the British pursuing them, who ran out of ammunition, and the Nandi massacre, led by Richard Meinertzhagen , when the Nandi were building the railway through her Opposed territory. Two armored trains were also used, from which fleeing locals were shot at. These actions led to the flight of large parts of the indigenous population from the catchment area of ​​the railway.

After the railway went into operation, the cost of transporting goods from Uganda to the coast fell by 97%. In addition to the military, the railway was also of considerable economic importance. Numerous tea and coffee plantations were created in their catchment area. The settlement of Europeans who operated such plantations was encouraged by the British government, since it was the freight traffic brought about by agriculture that made the railways profitable.

The German Colonial Lexicon , printed in 1920, gives an overview of the increase in the quantities transported:

The line was built in meter gauge and consistently single track. The model was Indian railways, from which around 20,000 workers were recruited and some of the original material came from. Construction began in 1895 and was the essential prerequisite for the conquest of Uganda, which was not yet completed when the Uganda Railway was partially opened in 1896. The British brought in Sudanese soldiers as a military protection force, among whom there was a serious mutiny in 1897. The Uganda Railway was built and opened in sections from Mombasa in a north-westerly direction towards Uganda from 1896. It was difficult, mountainous terrain to cross that required numerous bridges and other engineering structures . Local uprisings by the King of Uganda and Unyoro had to be put down. The railway reached Nairobi in 1899 (km 530.3), originally a construction warehouse for the railway that developed into the capital of Kenya and carried around 179,000 passengers in the third year. The railway led to the founding of numerous other cities along the route:

From Nairobi in 1901 another section was opened towards Uganda. The railway was first led to Kisumu (then: Port Florence; today km 216.7, counted from Nakuru ) on Lake Victoria, which it reached in 1901, from where there was a connection with a ship belonging to the railway to the Ugandan ports on the northern shore of the lake . The railway line in the direction of Uganda was not expanded until 1923, starting with the existing line in Nakuru (km 188.1), and in 1926 it crossed the border into Uganda. In 1929 the Uganda Railway was connected to the Busoga Railway at Mbulamuti Station . This section between Busembatia and Mbulamuti was replaced in 1961 by a much shorter route for the Uganda Railway. The old line was reconnected in 1962 for direct traffic to Kakindu at Bukonte station . In 1930 the Uganda Railway reached Kampala. Here, the White Nile at was Jinja first with a ferry crossed. The bridge was not completed until 1931 and continuous train traffic to Kampala began on January 14, 1931. The extension of the line to Kampala from Nakuru meant that the original end of the line between Nakuru and Kisumu became a branch line of the main line Mombasa – Nairobi – Kampala. In 1952 the Ugandan government decided to extend the route behind Kampala to Kasese (km 585.8) near the border with the Democratic Republic of the Congo . This extension was opened in sections from 1953 to 1958, but closed in 1998 .

On May 1, 1948, KUR & H and Tanganyika Railway and Port Services merged to form the East African Railways and Harbors Administration (EAR & H) and renamed East African Railways (EAR) after independence in 1969 . After the customs and economic union between Uganda, Kenya and Tanzania broke up in 1977 due to the widely divergent political and economic systems, the part of the common railroad that was on Ugandan territory was renamed the Uganda Railway Cooperation (URC), the, the was on Kenyan territory, renamed Kenya Railways (KR). 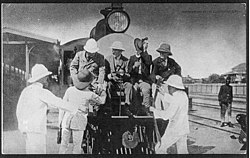 US President Theodore Roosevelt (seated, far right) on the viewing platform of a locomotive on the Uganda Railway

One of the first detailed descriptions of the railway line can be found in the expedition report of Ludwig von Savoyen, who in 1906 succeeded in mapping the sources of the Nile and the first ascent of the Ruwenzori mountain range. In 1909, the former President of the United States of America , Theodore Roosevelt , went on a safari in East Africa, during which he also took the Uganda Railway. He spent most of the day on a viewing platform for tourists mounted on the front of the locomotive.

During the First World War , the railway was of great importance in the campaign of British troops against the troops under the command of Paul von Lettow-Vorbeck in German East Africa, south of the railway line . The railway could quickly transport troops and heavy equipment far into the hinterland. Therefore, at the beginning of the war, the Uganda Railway was the target of numerous German small combat groups who attacked British military platoons and set booby traps.

Due to the dictatorship of Idi Amin and the subsequent collapse of the state structures in Uganda, rail traffic had to be stopped in 1979. From 1986, freight traffic was gradually resumed.

On August 20, 2000, 18 people were killed in an explosion at Athi River train station . The cause was several derailed liquid gas wagons on the railway.

Situation in the last years before 2017

On November 1, 2006, both URC and KR were acquired by the Rift Valley Railways Consortium (RVR). Since 2009, RVR has been owned by three private shareholders from Egypt (Citadel Capital), Kenya (Transcentury) and Uganda (Bomi Holdings) and operates all rail traffic on the Uganda Railway and shipping on Lake Victoria on the basis of a 25-year concession . From 2010 to the end of 2014 Tobias Heinemann was Chief Commercial & Marketing Officer at RVR.

In 2011, an international financial consortium led by the World Bank subsidiary International Finance Corporation (IFC) approved funding of $ 287 million for the modernization of the railways in Kenya and Uganda. The investment is intended to modernize the vehicle fleet, the railway infrastructure and to set up a logistics company that will bundle the import of goods to East Africa and handle it for the most part by rail. In view of the negotiated and signed financial framework, the project is one of the largest PPP projects in Africa and is rated by the RVR as an essential prerequisite for the further positive economic development of Kenya. This should reduce the travel time between Mombasa and Nairobi from 12 to 4 hours

In addition, the use of the Uganda Railway for public transport in the greater Nairobi area is planned under the leadership of RVR . For this purpose, another $ 500 million will be made available by the Kenyan government and the World Bank. German investors are u. a. the Kreditanstalt für Wiederaufbau and the DEG bank.

Truss bridge on the route; Small picture: A train on the top of the Mau pass

One of the first descriptions of the railway line can be found in the expedition report of Prince Ludwig of Savoy. The kilometers of the route counts from Mombasa to Nairobi (km 530.3). From Nairobi, the kilometer reading starts again at 0, counts to Nakuru Junction (km 188.1), starts again from 0 and then counts to the state border between Kenya and Uganda in Malaba (km 370.7). The section between the two border stations to Tororo is separately kilometer (15.6 km), then begins again and counts through to Kasese (km 585.8). In total, the route was 1674.9 km long. 1340.5 km of them are still in operation today.

The route runs from Mombasa inland, north of Kilimanjaro via Voi and Tsavo to Nairobi , the center of the colonial railway administration. Behind Nairobi the steep ascent into the Kikuyu Mountains begins , whose pass height is reached at 2340  m . Then the train cuts through the Great African Rift with 450 m difference in altitude in a lost slope and reaches the western edge of the ditch at Mau Summit at an altitude of 2545 m. From here it drops, often with artificial length developments, to Lake Victoria at 1113  m .

The condition of the track in Uganda is bad today. The operational safety is also not optimal, the driving speed is low, derailments are frequent. In 1993 there was a railway accident when a bridge was washed away after heavy rainfall. 114 people were killed. In 1999 there were 32 deaths when a passenger train derailed due to brake failure near Tsavo National Park . In 2000 there were 13 deaths when the brakes failed again on a train. In the same year, a freight train carrying gasoline exploded, burning 25 people.

A number of routes were created branching off from the Uganda Railway:

Next was in Kisumu afterwards 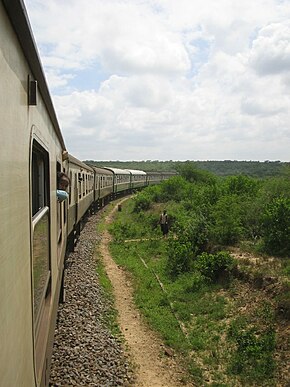 Train Nairobi-Mombasa on the route

North of Nakuru Junction - and especially in Uganda - there is now only freight traffic on the route . Passenger traffic ceased there in the 1970s during the civil war in Uganda.