from Wikipedia, the free encyclopedia
This is the spotted version , flagged on December 30, 2019 . There are 2 pending changes that have yet to be viewed.

The Great African grave breach ( English Great Rift Valley or the East African Rift System (EARS)) is a rift zone that extends from East Africa to Southwest Asia and passing through the division of the Arabian Plate from the African plate has emerged over the past 35 million years. It is assumed that a newly emerging plate separates from the Africa plate along the rift valley, for which the term Somali plate is used.

The rift valley was first explored and its geological significance recognized by the Scotsman John Walter Gregory , after whom it is sometimes called the Gregory Rift .

The Jordan Rift Valley as part of the Great Rift Valley, photo from space

The Great African Rift Valley is around 6000 kilometers long from its northern end in Syria to its southern end in Mozambique . The width of the valley varies between 30 and 100 kilometers, the depth from a few hundred to several thousand meters.

The northernmost part of the rift is formed by the course of the Orontes ( Nahr al-Asi ) with the Ghab plain ( al-Ghab ) and the Bekaa plain ( al-Biqa ), followed by the valley of the Jordan , the Jordan Rift , in which the River flowing through the Sea of ​​Galilee to the Dead Sea . Further south, the rift forms the Arava Depression and then the Gulf of Aqaba and the Red Sea .

A branch formed at the southern end of the Red Sea. The Gulf of Aden forms the eastern continuation. Before the rift opened, the Arabian Peninsula was connected to the Horn of Africa ; from here it becomes part of the mid-ocean ridge of the Indian Ocean .

This line separates the Arabian plate from the African continental floe . 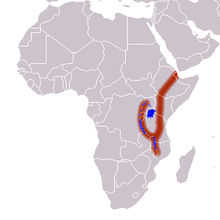 Southwest forming disorder now the continental Rift Valley (East African Rift Valley), from its impressive dimensions, the entire Great Rift Valley originally got its name. In the Afar Triangle , the trench, initially called the Ethiopian Trench, divides the geologically old Ethiopian highlands into the northwestern highlands of Abyssinia and the southeastern Somali highlands .

In East Africa the valley is divided into the Eastern Rift and the Western Rift , also known as the Central African Rift . Lake Victoria , the third largest lake in the world, is also considered part of the Rift Valley, although today it lies between the two branches of the system. The enclosed area is the archaic Tanzania - Kraton formed, ranging in depth up to 200 km.

The Eastern Rift is lost a bit in the Kenyan highlands, in Kenya the valley is deepest in the north of Nairobi . Since there is no drain for the water here, the lakes formed are only shallow and have a high mineral content. Salt lakes and salt deposits are formed by evaporation of the water . For example, Lake Magadi is made up of soda ( sodium carbonate ), Lake Elmenteita , Lake Baringo , Lake Bogoria and Lake Nakuru are highly alkaline , and Lake Naivasha needs fresh water supplies to maintain its biodiversity.

The southern part, after the two branches reunite, is called the South Rift Valley or Malawi Rift, after Lake Malawi . It extends as far as the zone on the Indian Ocean in Mozambique called the Rift Valley coastal region, at the height of Madagascar, which is formed by the mouth of the Zambezi .

The Rift Valley continues to develop: in a few million years, Eastern Africa will probably be split off from the rest of the continent and form a new land mass of its own .

The tectonic activity that formed the Rift Valley weakened the earth's crust along its borders. The area is therefore volcanically and seismically active. The volcanoes of the Mount Kenya massif , Kilimanjaro , Karisimbi , Nyiragongo , Mount Meru and Mount Elgon as well as the crater highlands in Tanzania were formed . The Ol Doinyo Lengai volcano is still active and is the only carbonatite volcano in the world.

The Rift Valley is a rich source of paleoanthropological discoveries, particularly in the Olduvai Gorge . The rapid erosion of the highlands filled the valley with sediments that provide good fossil conservation conditions . Several fossils of early representatives of the Hominini (various Australopithecus and Homo species) were found. Richard and Meave Leakey in particular made many discoveries in this region.

Another well-known hominid site is the Middle Awash region in the so-called Afar triangle . From this area comes Lucy , an Australopithecus afarensis woman, whose skeleton, largely preserved , was discovered there in 1974 by Donald Johanson .

The Rift Valley is considered to be the " cradle of mankind " (main place of hominization ) according to the state of today's fossil finds , even if some more recent finds from South Africa and the Sahel region have relativized the theory of a development exclusively in this area.