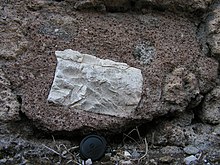 White limestone xenolite in the red-brown lava of Vesuvius , Italy 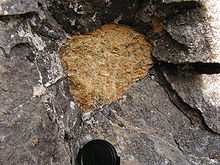 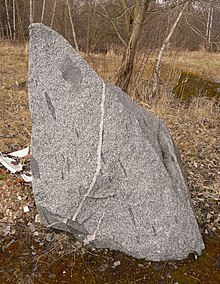 When magma accumulates in the earth's crust or mantle, and when it rises to the surface, parts of the surrounding rock can break in or break off and be absorbed by the melt. Due to the high temperature of a magma, these fragments (xenolites) suffer contact metamorphic overprinting or melting. Therefore, xenolites with a long residence time in the magma often have rounded edges or spherical shapes. The size of xenolites can be a few millimeters to tens of meters. Occasionally also be collections of (mostly mafic ) minerals that crystallize early from the melt and due to their high density at the bottom of the magma chamber accumulate, called xenoliths, although it is actually not to foreign rock , but a Kumulat concerns.

If a magma contains a significant amount of foreign rock, the composition of the melt can change significantly due to the absorption of chemical elements from the xenolites.

Xenoliths are often fragments of secondary rock that have been transported from the subsurface. Therefore, they are a (in many cases the only) means to directly examine deeper rock layers. The local sequence of layers can be deduced from the fossil content of the xenolites . Geothermobarometric methods allow the pressure and temperature conditions under which the xenolites were formed to be estimated. From this, the depth at which the melt was formed can be determined. Metamorphic changes as well as the degree of rounding of the xenolite give an indication of the magma temperature and the length of stay. Ideally, this information can be used to calculate the rate of ascent of the magma from the place of origin to the earth's surface.

In deep areas of a volcanic chimney that are cut through by erosion today , xenolites can be found that have sunk from higher areas in the formerly molten chimney filling. These sinking clods can provide information about which rock strata were above today's level at the time of igneous activity and thus serve as an aid to determining the age (the magma must be younger than the sinking clods).