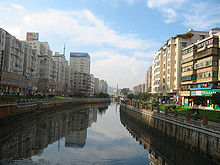 A canal in the city center

Kunming ( Chinese  昆明 , Pinyin Kūnmíng , W.-G. K'un-ming ) is the capital of Yunnan Province in the People's Republic of China . In China it is also known under the poetic name "City of Spring" ( 春城  - "Chūnchéng"). As the provincial capital of Yunnan, it used to be called “Yunnan Fu” ( 雲南 府  /  云南 府 , Yúnnán fǔ  - “ Official seat of Yunnan Prefecture”). The current urban area (in the narrower sense) is located on the northern edge of Lake Dian and has an area of ​​approximately 300 km², the entire district-free city an area of ​​21,501 km². At the end of 2002, Kunming had a population of about 4.95 million. In 2016 the population was 6,728,000. There are also around 1 million migrant workers. 3.3 million people live in the actual urban settlement area of ​​Kunming (2010 census). A modern new business district has emerged in the center of the city.

The city is currently being expanded to the east and south of Lake Dian. The east city was built on an area of ​​160 km² in the new city district (since May 20, 2011) Chenggong, where 900,000 people live. Two further city extensions are planned in the south of Dian Lake (Südstadt).

Kunming is located on the East Yunnan Plateau, which is almost 2,000 m high. This location results in relatively mild temperatures all year round, so that Kunming is also known as the “city of eternal spring”. The city is currently growing from the north along the eastern side of the 39 km long Dian Lake.

In 2017, just under 4.1 million people lived in the actual urban settlement area of ​​the city. The rest of the population lives in the rural area. Due to advancing urbanization, the agglomeration is expected to have 5.6 million inhabitants by 2035.

Future city administration in the new Oststadt (from May 2010)

The industrial city of Kunming generates a third of the economic output of the entire Yunnan Province. According to a study from 2014, Kunming generated a gross domestic product of 88.6 billion US dollars in purchasing power parity . In the ranking of the economically strongest metropolitan regions worldwide, the city took 152nd place. The GDP per capita is $ 13,418 (PPP). The city employed 2.5 million people. At 11% annually from 2009 to 2014, GDP per capita grew rapidly. The main industries are mechanical engineering, electrical engineering / electronics / optics, metallurgy (copper ( Yunnan Copper ), aluminum, steel), chemistry (phosphorus) and pharmaceuticals. Agriculture is also of great importance. Kunming is the largest flower producer in China. Kunming also ranks first with tobacco production. A significant part of Kunming's companies are concentrated in the two state industrial development zones:

Solar thermal systems on the houses in Kunming

What is noticeable in Kunming are the numerous solar thermal systems on the roofs of the residential buildings, which cover 60–70% of the hot water requirement. Costs of RMB 2000 per system are offset by savings in energy costs of RMB 10,000 per year.

In addition, photovoltaics is increasingly being promoted. At the end of 2008, Yunnan Tianda Photovoltaic Co, Ltd., based in Kunming's economic development zone, was established in Shilin. started construction of the largest photovoltaic power plant in Asia. A power plant with a capacity of 166 MW is to be built on an area of ​​173 ha. Once the first phase has been completed, 10 MW of electricity will be fed into the grid by the end of 2009.

Kunming's U- and S-Bahn system, completed and in planning

In the context of infrastructure development, the modernization and expansion of the transport links are assigned a high priority. In 2009 around 1 million cars were registered in Kunming, 70% of which are privately owned. The second traffic light-free city ring was inaugurated on September 28, 2009, and a third ring road has already begun. Five central bus terminals are under construction.

Train connections exist to many cities in China. Express train routes are currently being built, particularly to Chengdu , Chongqing and Changsha . The express train route to Shanghai was opened at the end of 2016, reducing travel time from 35 hours to ten and a half hours. A logistics center and the largest container terminal in China with connections to Singapore, Vietnam, India, Thailand and Myanmar are also in preparation. A high-speed line from Kunming to Singapore via Vientiane and Bangkok is to be completed by 2020 . The city is the starting and ending point of the meter-gauge Yunnan Railway leading to Vietnam .

A combined S-Bahn and U-Bahn is under construction and will mainly connect the north and east of the city. A total of six lines are planned. Line 6 between the airport and East Bus Station has been in operation since 2012 and lines 1 and 2 have been in regular operation since April 2014.

The Kunming-Changshui International Airport opened in 2012 and replaced the old Kunming Airport . This is one of the oldest in China, but could not be expanded. Kunming-Changshui Airport is 25 km from Kunming and is accessible by airport bus and metro. It is the fourth largest airport in China and is one of the five most important flight connections with Beijing , Shanghai , Guangzhou and Urumqi . With investments amounting to RMB 28 billion, four runways were built, which should enable capacities of 27 million passengers per year in a first stage and ultimately 65 million. The airline Air Travel (Hongtu Airlines) is based in Kunming.

Campus of the Technical University in the new east town

Kunming has developed into a city that is also attractive for tourism in recent years. In 2008, 16 million domestic and foreign tourists visited the city. A special tourist economic zone on Lake Dian is under construction. In addition to the provincial museum in Kunming, the pagoda of the west temple and the pagoda of the east temple are particularly worth seeing. In the vicinity of the city, the Dian Lake and the West Mountains (Xishan) as well as the "Stone Forest" ( Shilin ) are popular attractions. In the center of the city is the "Green Lake". In addition, the Daguan Tower in the middle of Daguan Park attracts a large number of tourists every year. Other destinations worth seeing around and in Kunming are the Qiongzhu and Yuantong monasteries, the Jindian (golden temple). The Jiuxiang karst height groups are among the most beautiful natural landscapes in the world.