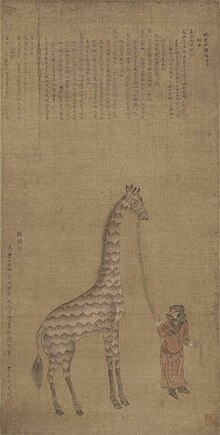 Zheng He brought a giraffe from his travels (painting by Shen Du , 1414)

Zheng He undertook seven large expeditions to the Pacific and Indian Oceans with large fleets between 1405 and 1433 . He not only successfully fought piracy , but also explored the seas as far as Arabia and East Africa . His junks are said to have covered more than 50,000 km.

In the absence of reliable sources, the following statements are more likely to be categorized as popular tales.

Zheng He was born to a Muslim family during the Ming Dynasty in Kunyang, what is now the Kunyang Street District in Jinning District, Yunnan Province in southern China . His birth name was Ma He . He was a direct descendant - in the sixth generation - of the famous Minister Sayyid Adschall Schams ad-Din Umar (1211-1279), who was in the service of the Mongols , whose ancestors came from Bukhara and were considered to be the descendants of Muhammad . His grandfather and father, as devout Muslims, both completed the Hajj , the pilgrimage to Mecca . In Hongwu 15 (1382), when he was eleven years old, he was captured by the Ming troops who were pacifying the province of Yunnan. At the age of 13 he was castrated because the emperor and his descendants were the only men in the palace who were capable of procreation. Zheng He first came as a servant to the court of the Prince of Yan, Zhu Di, who later became the Yongle Emperor (1403–1424) of the Ming Dynasty as Cheng Zu .

Ma He showed himself to be an exceptional servant and was instructed in the arts of war and diplomacy . Prince Zhu Di gave Ma He the new name Zheng He (Cheng Ho) after the eunuch's horse was killed in a battle near Zhenglunba. Another name for Zheng Hes is "San Bao", which means "three jewels ". According to reports, Zheng He was an imposing figure. He is said to have been over two meters tall and very stout and to have had a deep or very penetrating voice.

When Prince Zhu Di became emperor in 1402, it also meant a significant increase in power for Zheng He. In 1403 the new Emperor Yongle appointed him admiral and ordered a fleet of treasure ships to be built in order to expand the sphere of influence of China and to appear again as a powerful country after the foreign rule of the Mongols. Admiral Zheng He was the first eunuch to hold such a high military position in China.

The Zheng Hes fleets consisted of ships of various designs, including huge junks , the " treasure ships ", which, according to ancient Chinese chronicles, were up to 120 m long and 50 m wide. However, modern research on the treasure fleet suggests that these sizes are probably greatly exaggerated and that the largest treasure ships were only about 59 to 84 m tall. They were the flagships of the fleet and were built in dry docks in Nanjing on the Yangtze . To make the ships seaworthy, they were built in bulkheads .

The main purpose of the voyages was trade, especially in spices and jewels, the destination of the dragon fleet therefore Indian, Persian and Arab trading ports; but the Chinese admiral was also supposed to bring home tribute payments for the dragon throne. The land route, the Silk Road , had become unsafe at the time of the first voyage (1405): thus the new shipping routes served "as a relief to reinforce trade and loyalty to vassals". The fleet had thousands of tons of Chinese merchandise on board. It consisted of z. Some eight-masted large junks as well as horse transporters, special ships full of drinking water and herbal reservoirs for the ship's pharmacies as well as fast signal ships. The fleet carried thousands of soldiers with it, not only to fight the pirates, but also to emphasize the emperor's claims to power. With its enormous dimensions and "with its red sails, the fleet looked like a floating city made of red silk. Each ship was decorated with wide eyes on the bow, and 24 bronze cannons on each large ship" underscored the imperial power.

The compass , which was invented in China in the 11th century , was already used for navigation . Marked incense sticks served as clocks. Each day consisted of 10 wakes of 2.4 hours each, i.e. 2 hours 24 minutes each. The geographical latitude was determined by measuring the astronomical height of the Pole Star in the north and the Southern Cross in the southern hemisphere.

The first treasure fleet consisted of 62 ships. In the autumn of 1405 she ran out with a crew of 27,800. The aim of the first trip was Calicut in India to buy pepper for silk and porcelain . India had already been explored by land by the Chinese explorer Xuanzang in the 7th century . The fleet made stops in Vietnam , Java and Malacca and then headed west across the Indian Ocean to Sri Lanka and the southeast coast of India. The fleet spent the winter of 1406/1407 there doing trade and diplomacy. On the way back, she fought pirates who were hindering trade with India. Their leader was captured and publicly beheaded. The return to Nanjing took place in 1407.

On board was Ma Huan as translator , who accompanied Admiral Zheng He on three of his seven trips to the Western Oceans and whose report has given us the best possible knowledge.

The second voyage of the treasure fleet went to India again to secure the power of the King of Calicut there. Zheng He did not attend personally because he oversaw temple repairs in China.

The third voyage, the second for Zheng He, was carried out with 48 ships and a crew of around 30,000. It followed a similar route as the first trip. Warehouses for goods were set up along the way. The King of Sri Lanka was hostile to the Chinese. Zheng He's troops defeated the king's forces, captured him himself, and took him to Nanjing.

At the end of 1412, Zheng He received the order for a fourth journey from the emperor. Around the turn of the year 1413/14 the fleet with 63 ships and 28,560 men ran out. The destination was the Strait of Hormuz on the Persian Gulf , known for pearls and precious stones . Parts of the fleet sailed along the east coast from Africa to Mozambique . In the summer of 1415 the fleet returned to Nanjing with Arab and African diplomats and numerous treasures from the Orient.

The fifth trip was ordered by the emperor in 1417 to bring the diplomats from Nanjing back to their home countries. The treasure fleet left Nanjing in 1417, made its way across the Persian Gulf to the east coast of Africa and stopped in Mogadishu , among other places . She returned in 1419.

The treasure fleet ran out in the spring of 1421. The trip went back to Africa via Southeast Asia, India and the Persian Gulf. Zheng He himself returned to China in late 1421, the rest of the fleet in 1422.

Emperor Yongle died in 1424. This was a heavy blow not only for Zheng He personally, but also for the Chinese treasure fleet. The new Emperor Hongxi (Yongle's son) put an end to the treasure fleet's voyages and sent shipbuilders and sailors home. Zheng He became the military commander of the capital, Nanjing.

Emperor Hongxi died in 1425. His son, the Xuande Emperor, ascended the imperial throne. He leaned toward his grandfather's interests and had the treasure fleet reactivated. In 1430 he gave orders for another trip. Zheng He was reinstated as an admiral. The aim of this trip was to restore peaceful relations with the kingdoms of Malacca and Thailand . A year later, the fleet with 100 ships and 27,500 men ran out.

Reports of Zheng He's death are contradicting. According to some information, he is said to have died on the way home in 1433, according to others in 1435 after his return.

Zheng He's grave is near Nanjing. The large sarcophagus made of light-colored stone in the Ochsenkopf Mountains, which is officially a grave and memorial, is demonstrably empty. The tomb was restored in 1985 on the 580th anniversary of the treasure fleet's first voyage. In Nanjing there are still three of the large dry docks on which Zheng He had his ships built.

Zheng He's undertakings did not bring any profit to the imperial court, but always resulted in a financial deficit for the government. For this reason, the Confucians at court branded his trips as a waste of state money. At the end of the 15th century, Zheng He was therefore subject to a certain demonization by the scholarly elite, who even had parts of the records destroyed, so that today only sparse sources are available.

A completely opposite development was also observed. Soon after his death, Zheng He was elevated to a venerable ancestor by the Daoists and named a deity with the addition of "eunuch, admiral and god". After this deification, he soon became not only a popular patron saint with seafarers, but is still called upon to this day in the case of illnesses, in the selection of spouses and in all questions relating to domestic happiness.

In 2005, the 600th anniversary of Zheng's first trip was celebrated. On May 24, 2005, the Green Eyebrow set sail in Qingdao , a replica of one of the smaller ocean-going vessels in the historic fleet, to call at 17 Asian and African ports after 40 days in Chinese coastal waters like Zheng He did 600 years earlier.

End of the treasure fleet

Emperor Xuande's successor, Zhengtong , adopted a completely different maritime policy. Due to severe natural disasters in China, he gave up the treasure fleet. Its enormous cost became prohibitive and the money was used to rebuild devastated areas. However, the large treasure ships were not destroyed, but only decommissioned for the time being. However, since there was no money available for maintenance, the ships were gradually scrapped.

The largest part of Zheng He's fleet by 1435 the Imperial Navy assigned. This ended the time of the Chinese voyages of discovery. At the same time (1434) the Portuguese navigator skirted Gil Eanes on behalf of Henry the Navigator , the Cape Bojador on the west coast of Africa - an important step in the discovery of the sea route to India and thus also a step on the road to European expansion .

Contrary to popular belief, China did not cease its maritime trade after 1435 ; this only happened in 1551 under Emperor Jiajing and was short-lived. On the contrary, the Middle Kingdom remained the most important sea trading power in East Asia . Until the Opium War , the Chinese traders sailed the sea routes between the East Asian countries as far as India, also based on the traditions of Zheng He. However, no emperor was ever ready to take on the high costs of a purely state-financed merchant fleet.

The 399 meter long container ship CMA CGM Zheng He of the CMA CGM Christophe Colomb class was named after Zheng He .

The British writer Gavin Menzies hypothesized that the treasure fleet had circumnavigated the world between 1421 and 1423 and discovered America and other parts of the world. Menzies' theses are unanimously rejected by specialist historians as historical fiction.

The China National Space Administration is planning a mission to the asteroid (469219) Kamoʻoalewa under the name Zheng He. The mission is scheduled to start in 2022 and bring samples to Earth.

Commons : Zheng He  - collection of pictures, videos and audio files