The title of this article is ambiguous. For a similarly pronounced family name, see Zschunke .

The junks operate as merchant, cargo or fishing ships on the Chinese rivers, the coastal waters and the high seas. They are often used as houseboats. The larger junks have a capacity of 400 to 500  register tons . 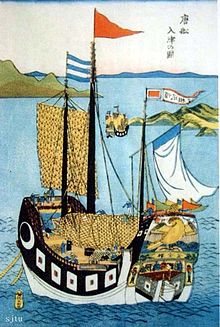 Junks in the fishing port of Tsingtau , 1898 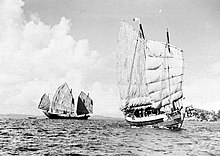 The junk can only be compared to a limited extent with European or Arab ships, as it is a so-called box boat. It has no keel , has a flat bottom and the side walls are drawn up almost vertically. The planking is made of clinker construction, but here, unlike in European shipbuilding, the planks are applied from top to bottom. Many junks are characterized by their raised ends, which sometimes give the ship an almost banana-like shape.

The sail consists of Dschunkensegeln , with bamboo Rods battened are. The spreading of the sails by means of these light bamboo cross bars ensures an optimal distribution of the forces acting on the mast and thus protects against mast breakage. In addition, the fully battened junk sails can be easily operated from the deck. The short pole masts of a junk are usually not braced by shrouds and stages , so that the sails can be swiveled all around. If the ship is on course , the elastic masts are held aft by backstage . The masts of a junk do not necessarily have to be amidships, but can also be arranged asymmetrically in relation to the keel line.

Junks are robust, safe and fast sailing ships. You can sail on all courses without any problems. A turning maneuver can be carried out by one person on a 20 m long ship, the sails jump over to the corresponding position on their own. Junks have a watertight partitioning system and are sometimes double-walled. They have a balanced tail rudder that can be pivoted vertically. To increase the Unterwasserlateralplanes be side swords, swords or means Leeschwerter used. There are also junks with bolted keel fins.

Apart from the basic characteristics of this type of ship, there are regional and usage-related differences in the construction. The junks of the north, for example, have a blunt, spoon-shaped bow , a clumsier design and an almost rectangular sail outline. They therefore appear more cumbersome than the junks of the south.

The junks used in river navigation are usually narrower than the sea-going types and have only one mast, but a higher one. Historically, the economic use of the river junks declined with the development of the inland waterway canal in China since the Han Canal was built in 486 BC. And the development of domestic trade.

Stern rudders (1st century at the latest) and watertight transverse and longitudinal bulkheads (2nd century) were part of this type of ship from an early stage. From the 8th century were side boards to improve rate stability introduced.

Marco Polo (around 1254–1324), who himself traveled on junks in the 13th century, describes them in his travelogue " Il Milione " as follows:

“First [let us] start with the description of the merchant ships. These are built of fir wood and have only a single deck; Below this the room is divided into sixty small cabins - more or less depending on the size of the ships - which are intended to accommodate the merchants. They have four masts with as many sails, and some have two masts. […] The largest ships have a crew of three hundred, others of two hundred […] people. The ships can be loaded with five to six thousand baskets of pepper. "

Marco Polo also describes that the ships (junks) had dinghies with which they were pulled when there was no wind, from which the anchors were laid and fish were caught.

On such a ship (within a fleet ) Marco Polo sailed back from China in 1294 to the Strait of Hormuz .

During military conflicts in the 12th century, the use of the paddle wheel drive on the Yangtze River is recorded (see Chinese paddle wheel boats ). Many junks were about 60 m long, 9 m wide and 400 or 500 tons carrying capacity. The ocean-going junks that were used in trade between China and India were 3,000 to 4,000 ton sailors that served both as cargo and passenger ships. The Arab world traveler Ibn Battuta describes that they had cabins of various sizes, from simple chambers to multi-room suites with bathrooms and toilets. The junks could carry up to 300 travelers and, in addition to a crew of around 600, had 400 crossbowmen on board.

The largest junks were the so-called treasure ships of Admiral Zheng He in the early 15th century. They sailed the Indian Ocean and even reached the east coast of Africa. In the 16th century the further development of junk technology came to a standstill. Nowadays, there are also junks-like river boats in China whose hulls are built on a keel and which sometimes have an additional foresail .

“ The fuselage is made of soft wood that can be bent easily and still retains its shape. The junk is the ship with the smallest wettable area compared to the sailing area; it flies over the water and does not cut through! Building junks is quick and easy; Nevertheless, thanks to the system of watertight subdivision, it retains a strength that can withstand any stress. The ribs are replaced by a system of lengthways and crossways bulkheads. Overall, this strange vehicle was five hundred years ahead of us. "