The title of this article is ambiguous. For his father, the opera singer of the same name, see Friedrich Samuel Gerstäcker . 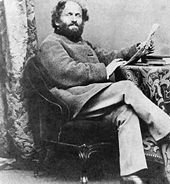 Memorial plaque on the birth building at Poststrasse 19 in Hamburg

Friedrich Wilhelm Christian Gerstäcker (born May 10, 1816 in Hamburg , † May 31, 1872 in Braunschweig ) was a German writer . He is best known for his books on North America ; his bestsellers were The Regulators in Arkansas (1846) and The Mississippi River Pirates (1847).

Friedrich Gerstäcker was born in Hamburg as the son of the opera singers Friedrich Samuel Gerstäcker (1788-1825; starring Max in the Dresden premiere of Carl Maria von Weber's "Freischütz" ) and Louise Friederike Herz . After the death of his father, he lived with his sister Molly at first with his uncle, the court actor Eduard Schütz in Braunschweig, and also attended school there - the traditional Martino-Katharineum . After completing secondary school , he began a commercial apprenticeship in Kassel in 1833 , which he broke off after a few months. He walked back to his mother in Leipzig and told her that he wanted to emigrate to America. His mother was able to persuade him to do an agricultural training at the Doeben manor near Grimma in preparation for a life as a farmer. Gerstäcker was an avid reader of Daniel Defoe's novel Robinson Crusoe and James Fenimore Cooper's first tale of leather stockings, and based his vision of the New World on this reading. Gerstäcker always referred to himself as a “student of Cooper”.

The first trip to the USA

In 1837 he traveled to the USA for the first time and worked in various professions (as a stoker, sailor, hunter, farmer, cook, silversmith, woodcutter, chocolate maker, hotelier). Since urban life did not appeal to him, he led the life of a hunter . He sent his diary entries from America to his mother, who passed them on to friends. First excerpts from it are said to have appeared in Robert Heller's magazine Rosen ; However, they are still not detectable today. After six years of wandering through North America from Canada to Texas and from Arkansas to Louisiana , he returned to Germany in 1843, full of energy. He settled in Dresden, translated well-known authors from English and published his first literary works in various magazines. The regulators in Arkansas and The River Pirates of the Mississippi established his success as a writer , Gerstäcker was able to earn his living as a freelance writer in the future . 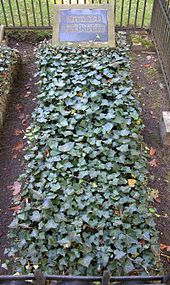 In 1844 he published his first book, raids and hunting trips through the United States of North America (based on his diary). The next year he married Anna Aurora Sauer, the daughter of a painter from Dresden . With her he had, among other things, the daughter Marie , who married William Huch in 1870 , an uncle of Ricarda Huch and her brother Rudolf Huch . Marie herself was the mother of Friedrich Huch and Felix Huch, among others . Gerstäcker also had a keen eye for the German political situation and observed the events of the revolution of 1848 very closely. In 1849 the young father made another trip, this time to South America , California , Tahiti and Australia and from which he did not return to Europe until 1852 . He found his way through adventurous ways along the way; he knew that his family was financially secure thanks to the works that have since been published.

In 1860 he went on a trip to South America, from which he returned in 1861, the year in which his wife also died. With a tour company of Duke Ernst II of Saxe-Coburg and Gotha, he went on another trip in 1862, this time to Egypt . The next year he married a second time, the 19-year-old Dutch Marie Luise Fischer van Gaasbeek.

Gerstäcker set out on his last great journey in 1867, the route of which led from North America, Mexico via the West Indies and Venezuela . Then he settled in Braunschweig and took part as a war correspondent in the Franco-German War of 1870/71.

Friedrich Gerstäcker died at the age of 56 in Braunschweig in the middle of preparing for a trip to Asia and India after a stroke.

Gerstäcker as a translator 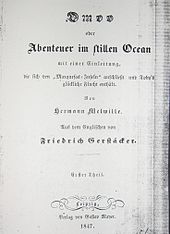 Title page of Gerstäcker's translation of Herman Melville's Omoo from 1847

The first unexpected success as a young writer with the Streif and hunting expeditions by the United States of America (1844) describes Gerstäcker in his autobiography in his own image in the gazebo in retrospect quite pragmatic: "However, the literary activity told me to the extent that I doing a could lead a completely independent life, but I hardly had any idea myself that I could ever create something independent - with the exception of the simple narration of my experiences. "

In spite of this considerable initial success, the as yet unknown writer found it difficult to bring the existing material (especially small stories) to publication. During this time Gerstäcker began to translate various novels and stories from English into German.

In his handwritten catalog raisonné he describes his translation of Seba Smith's The Indian Chief and Prisoners of the West (1844) as “the first literary. Work after the raids and hunting expeditions ”. In 1845 a transfer of Thomas J. Farnham's walks to Oregon was made by the Leipzig publishing house Gustav Mayer. Further translations by Gerstäcker and others followed by 1849. a. Wild scenes in forest and prairie (1845) by Charles Fenno Hoffman , The Adventures of an Emigrant. Tales from the colonies by Van Diemensland (1845) and Die Buschrähndscher (1846) by Charles Rowcroft, George Lippard's Die Quäkerstadt (1846), The Sailor by Bill Truck (1848) and Tyrwitt Brooks' Four Months in California (1849).

In 1847 the Gerstäcker translation by Herman Melville was published by Gustav Mayer under the title Omoo or Adventure in the Still Ocean . The print run in 1847 was between 2000 and 3000 copies. The low number of pieces by today's standards can be explained by the fact that most readers did not have the money to buy their own books and that the sales market consisted primarily of lending libraries . Not only because of its size (the two-volume first edition by Verlag Gustav Mayer comprises a total of 515 pages) Omoo has a special status among Gerstäcker's otherwise rather shorter translation work. It is also noticeable that the publisher dates the Gerstäcker translation to 1847: Omoo was published in the same year as the English original and Gerstäcker's second novel, The River Pirates of the Mississippi . In addition, the year before his first larger translation - it comprises 587 pages - was published: The Quaker City and its Secrets by George Lippard. The years 1845–47 must have been three extremely labor-intensive years for Gerstäcker, otherwise this colossal text production would not have been possible.

It can be assumed that the translation work helped Gerstäcker to create his own literary oeuvre. The templates gave him the courage to write similar things from his own experiences, impressions and experiences.

Since his translation activity was limited to the early years from 1844 to 1849 - with one exception: Mundy's Australia from 1856 - the thesis is supported that Gerstäcker's work as a translator was only a transitional stage, albeit a formative one. Gerstäcker's “career” can definitely be described with the formula adventurer - translator - writer - adventurer .

The young Gerstäcker, who “knew how to handle a rifle better than a pen”, found his way from adventurer to independent writer through his work as a translator, but without giving up his status as a “globetrotter”. The following always seemed to apply to Gerstäcker: “Living? Dear God, how long had I not known the word and there was no rest for me. - Further - further towards the setting sun ”. 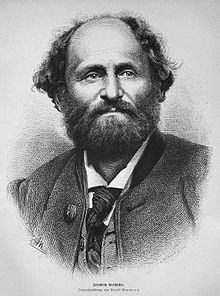 Portrait of Gerstäcker (The Gazebo 1872)

Friedrich Gerstäcker was an author of exciting adventure novels and stories, but also village stories , who also knew how to reproduce landscapes and cultural conditions so well that a predominantly young audience reads his well-known novels even today. The globetrotter, highly valued by his German readers and numerous willing emigrants, left behind a 44-volume complete edition that he himself had set up for the publishing house of H. Costenoble, Jena, before his death. His stories and novels inspired numerous imitators. Even Karl May , although less traveled in the world, profited greatly from him and used descriptions of landscapes, entire narrative strands as well as subjects and characters. Also Egon Erwin Kisch noticed the parallels between May and Gerstäcker said Karl Mays remember Revenge of Ehri to Gerst Äckers The girl from Eimeo and the figure Winnetou the noble Indians Assowaum.

In 1947 the city of Braunschweig donated the Friedrich Gerstäcker Prize , the oldest German youth book prize, which is awarded every two years. Its first prize winner was Kurt Lütgen (1952).

Illustration by Herbert König from Fritz Wildau's Adventures on Water and Land , 1854 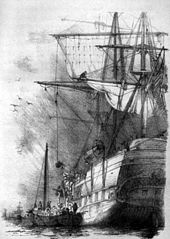