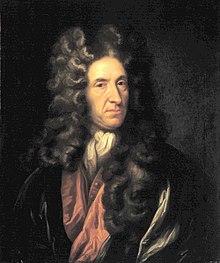 Daniel Defoe (* probably early 1660 in London as Daniel Foe ; † April 24th July / May 5th  1731 greg. In London) was an English writer in the early days of the Enlightenment , who became world famous through his novel Robinson Crusoe . Defoe is considered to be one of the founders of the English novel.

Daniel Foe was born to James Foe, a wealthy London tallow merchant and member of the Worshipful Company of Butchers , and his wife Annie. The year and place of birth are not known with certainty. Various sources cite the years 1659 to 1662 as probable. The Fore Street, Parish of St. Giles Cripplegate , London, is widely regarded as his birthplace. Daniel Foe later added a De to his name, which gave his name an aristocratic sound.

The first years of his life were accompanied by several disasters. In 1665 he experienced the Great Plague of London , in which a fifth of the London population died. A year later, in 1666, the Great Fire of London struck . The fire destroyed four fifths of the City of London , including most of the medieval structures, and left about 100,000 people homeless. Foe's house and two neighboring houses were spared. On June 19, 1667, the robbery occurred in the Medway . Dutch ships penetrated the River Medway via the mouth of the Thames and captured or burned a large number of warships of the English Royal Navy there .

When he was about ten years old, his mother Annie Foe died.

Defoe was raised Presbyterian (see: Charles II of England ). Originally, according to his father's will, he was supposed to be a clergyman and therefore received training at the Academy in Newington. Instead, however, he embarked on a career as a businessman . He married Mary Tuffley in 1684, who brought a dowry of £ 3,700 into the marriage. With the money he started his own business. The marriage had eight children, six of whom reached adulthood.

Defoe as a businessman

In 1685 Defoe joined James Scott, 1st Duke of Monmouth , who after the death of Charles II claimed the throne instead of his uncle James II (also James VII). The Duke's troops were defeated at Sedgemoor on July 15, 1685 , and the Duke was executed in London. Defoe fled to France but soon returned to London. There he operated an import-export trade in goods from and to the English colonies in America. He traded in wine, tobacco and food and made extensive trips to France, Holland, Italy and Spain. He owned three commercial buildings and was a member of the London guild. Economically, however, he had little success.

Although he was a merchant, Defoe saw himself as an intellectual who understood bookkeeping to mean expanding his library and writing his own texts rather than listing debits and credits. His writing was not very profitable.

During the armed conflict between England and France he lost several shiploads and had to declare his bankruptcy in 1692 with the then high sum of 17,000 pounds sterling. By taking over various public services and founding a brick factory, he achieved an appreciable income again.

Defoe as an essayist

For the understanding of the strongly autobiographical work of Defoe, the fact that he has been intensively concerned with the political and economic questions of his time for five years since his bankruptcy in 1692 is significant. He collected his notes in this regard and published them in 1697 under the title An Essay Upon Projects , where he referred to the numerous proposals contained therein for the general uplift and improvement of the "economic, social and cultural life of the nation" as projects.

At a young age he had devoted himself to numerous contributions to the religious, economic and political problems of his time. But it was only with his satirical poem The True-Born Englishman , published in 1701 , in which he advocated tolerance towards national and religious minorities, that great success came. 21 editions in four years, including twelve pirated prints, prompted him to add the noble De to his surname Foe. This refinement of the name was criticized by some contemporaries, but the "not so strict posterity" let it pass. The author signed his first edition of the Essay Upon Projects with DF in 1697.

A year later he reached with the anonymous treatise The Shortest Way With The Dissenters ( The Shortest Way with the dissenters ), the Anglican Church and the religious intolerance of the located with her in dissent other faiths sharply and had 1703 when his authorship became known , imprisoned indefinitely for distributing inflammatory pamphlets. In addition, the early scout was pilloried. As early as November 1703, the Speaker of the House of Commons , Robert Harley , was able to bring about the release of the popular writer because of his open and critical nature.

But imprisonment and fines had ruined him financially again. In order to earn a living, Defoe turned increasingly to journalism in the following years. From 1704 to 1713 he published the magazine The Review three times a week on behalf of the well-meaning Harley , the articles of which he wrote mostly himself. In it he advocates a union with Scotland, which finally came about in 1707. In 1709 Defoe wrote a History of the Union . During these years he established himself as an accomplished economic journalist.

Defoe as a writer

On May 6, 1719, at the age of 59, Defoe published his first novel The Life and Strange Surprizing Adventures of Robinson Crusoe , which suddenly became his most famous work. The content of the novel was based on the experiences of the seaman Alexander Selkirk , who had been abandoned on one of the Juan Fernández Islands off the Chilean coast and had spent more than four years there. The contemporary reports on it served the journalist Defoe as a template, but he reworked them in such a way that authenticity in the narrower sense cannot be spoken of. For example, after a good four years of loneliness, Selkirk was barely able to make himself understood; Robinson, on the other hand, is still mentally and linguistically in top form even after 28 years. What was new about this novel was the factual knowledge and the journalistic style. The book, however, brought Defoe only £ 50 and a small percentage share in subsequent editions. His publisher bought a new shop with the proceeds, leaving £ 50,000.

More adventure novels followed, including Memoirs Of A Cavalier (1720) and Captain Singleton (1720). Like these, the novel The Fortunes And Misfortunes Of The Famous Moll Flanders , published in 1722 , in which Defoe describes the conversion of a London prostitute, bears strong traits of his belief in the predestination and providence of God . The aim is to show the unfortunate fate of those who deviate from the right path of virtue.

Daniel Defoe tried throughout his life to strengthen political and religious freedom in England. The value of his journalistic writings is only just being recognized. Including his leaflets, there are around 250 Defoe works.

Daniel Defoe is buried in Bunhill Fields Cemetery in London . It is verifiable that for years after the death of all his relatives, strangers tended the grave. It is believed that they were the first - albeit numerically modest - supporters of an English labor movement.