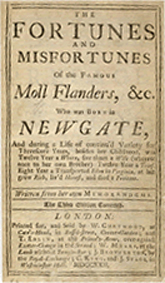 In the form of a first- person narration, he describes the life of Moll Flanders, a fictional character in which parts of real personalities (including that of the author ) can be found.

Moll Flanders grew up as an orphan and, with her clever, but also naive nature, became a popular child with some wealthy families. When she gets too old for the orphanage , she takes on one of these families. After a few years she falls in love with the eldest son of the family, who, however, cannot make his love for her public because it would not be appropriate for him to marry a housemaid. Realizing that she was treated and used like a whore is a hard blow to Moll. The younger brother, on the other hand, stands by his love for Moll and eventually marries her after the older brother persuades her to do so.

After a few years, Moll's husband suddenly dies and she is alone. In order to be financially secure, however, it is necessary for Moll to find a husband again. She marries a cloth merchant who, however, goes bankrupt after a while and has to leave the country. He leaves Moll free to find another man.

Since Moll is no longer very well off financially, it is also difficult for her to find another man who can give her the security she needs. As a result, she pretends to be richer than she is. Because of her cleverness, her new husband is not angry that she is relatively poor, but he would like to move with her to his plantations and to his mother in the New World.

After a few years, during a conversation with her mother-in-law , Moll realizes that she is her birth mother and that her husband is her half-brother. Disgusted by the idea of ​​sleeping with her own brother, Moll goes back to England. For a few years she lives with a gentleman in a wild marriage. However, after a religious experience, he ends the relationship.

With the help of a friend, Moll becomes richer than she is and finds a new husband. Shortly after the wedding, however, it turns out that her new husband is also poor. Although Moll has real feelings for her husband, he leaves her. When she was impregnated by her husband, Moll placed herself in the hands of a midwife who mainly looked after single women from the lower classes.

After making sure that her child is looked after, Moll marries a banker who has been managing her finances for some time, but who does not know that Moll has since got married and had a child. The banker dies because he cannot get over the fact that he has suffered great losses in a financial deal.

Moll turns penniless again to the midwife, who, meanwhile also shaken by strokes of fate, has lost much of her former good position. Under her care, Moll began a successful life as a thief and prostitute. Although after a while she will have enough money, she cannot stop stealing. One day she is finally caught, taken to the Newgate and sentenced to death. In several conversations, Moll was persuaded to turn away from her sins by a warm-hearted clergyman whom her midwife had placed her. Because of her repentance, the sentence is reduced and she is to be deported to the New World. In prison, she meets her former (Lancashire) husband again, who pretended to be rich to her.

After Moll has persuaded him in long conversations to accompany them, the two of them are deported to America together and buy a plantation with slaves from the money Moll “acquired” during her time as a criminal. In America, Moll also inherits from her mother.

In old age Moll and her husband return to London wealthy.