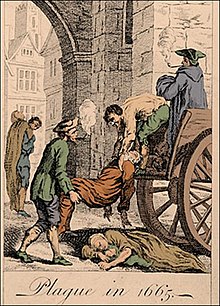 Image of the great plague of London

Directory of burials for 1665, broken down by parish, ordinary deaths and deaths from the plague

The Great Plague of London was a plague epidemic in the south of England in 1665 and 1666 . It claimed around 100,000 deaths, including around 70,000 in London , which corresponds to around a fifth of the city's population. The consequences were far less devastating than, for example, in the time of the Black Death from 1347 to 1353, but this epidemic was called the "Great Plague" because it was one of the last in Europe.

It is believed that the Yersinia pestis bacteria were brought to England by a Dutch ship that had bales of cotton from Amsterdam on board. The plague had occurred intermittently in the Netherlands since 1654 . The port areas outside London, where the poor workers were crammed into miserable dwellings, were the first to be hit by the plague. In the winter of 1664/65 there were several reports of deaths. The winter was very cold, however, which kept the infection rate within limits. The spring and summer months, however, were exceptionally warm and sunny, which encouraged the rapid spread of the plague. No records were kept of deaths among the poorest residents. The first recorded death from the plague was that of Margaret Porteous on April 12, 1665.

In July 1665, the plague had reached the City of London . King Charles II , his family and his court left the city and moved to Oxford . The Lord Mayor and the councilors, however, remained in their posts. The shops closed when most of the wealthy traders and artisans also fled. Only a small number of clerics , doctors and pharmacists chose to stay. Plague doctors roamed the streets diagnosing victims, even though many of them did not have the necessary training.

Various health measures were ordered. The city authorities hired the doctors and the funerals were organized in great detail. Residents were told to keep fires burning day and night in the hope that it would purify the air. Strong-smelling substances like pepper , hops and incense were also burned to ward off possible contamination. The residents, including young children, were told to smoke tobacco .

Although the plague was mainly concentrated in London, other areas of the country were also affected. Perhaps the best-known example is the village of Eyam in Derbyshire . The plague was brought in through a parcel of textiles sent here from London. The village quarantined itself . Around half of the population died, but this slowed down further spread in the surrounding areas.

Records show that in mid-July 1665, around 1,000 people per week died of the plague in London; in September 1665 there were 7,000 a week. In late autumn the number of new infections slowly began to decline and in February 1666 it seemed safe enough for the king and his entourage to return to the city. The plague had meanwhile reached France via trade routes , where the chain of infection broke off the following winter.

In the capital, the epidemic claimed further deaths over the course of the year, albeit within a manageable range. The Great Fire of London from September 2nd to 5th, 1666 destroyed a large part of the city's overpopulated residential and commercial areas. As a result of this event, the plague was finally stopped because practically all contaminated rats and fleas were burned in the flames. After the Great Fire, London was rebuilt. However, were straw - and Reet -roofs prohibited and the city received a simple sewage system.