This article covers the city in the Italian region of Piedmont. For further meanings, see Saluzzo (disambiguation) .

Saluzzo ( Piedmontese Salusse , occitan Saluças , French Saluces , German outdated Salutz ) is a city in the Italian province of Cuneo in the southwest of the Piedmont region . On January 1, 2019, the neighboring municipality of Castellar was incorporated. 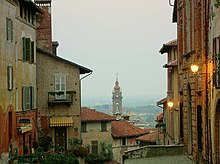 Saluzzo lies at an average altitude of 395 m above sea level at the foot of a foothill of the Monviso , where the Valle Po (upper course of the river) joins the Po plain. The Po, which rises in the Cottian Alps, flows past about 3 km north of the city and begins to meander in the plain here.

Part of the city is flat, while the other part is on steep slopes. The municipality covers an area of ​​75 km² .

From 1142 Saluzzo was a margraviate , first under a Manfred, who was a son of Boniface, Margrave of Savona. The line ended in 1548 when the city and territory were occupied by the French. Since the margraves were opponents of the House of Savoy and participated in the clashes between France and the Empire, the city was often ravaged by war.

Henry IV transferred the county to Charles Emanuel I of Savoy with the Peace of Lyon in 1601 .

Due to the history of the settlement, the place is divided into an older lower town on the plain and the upper town, which was fortified around 1280 and located on the western slope. Between the two, the remains of two gates can still be seen today: the Gothic Porta della Vacca , around 1379 ( Via Vacca / Via Palazzo di Citta ) and a little further south, the Porta S. Maria, which was renovated in 1791 in classicist style . The upper town has been able to preserve its medieval structure and historical building stock that is well worth seeing; Gothic buildings are preserved above all in the eastern part of the Salita al Castello , in the west there are also baroque aristocratic palaces.

The cathedral of S. Maria Assunta in the lower town was built in 1491 and 1501 and raised to the status of cathedral in 1511 when the new diocese of Saluzzo was established . The brick basilica has a uniform floor plan in the seven nave bays and the seamless connecting choir , corresponding to the short construction period. The church in Piedmont, which is the last large Gothic building, is more dependent on French than Italian models, but according to Lombard tradition, there is no transept . The campanile adjoining the choir to the north is based on the two basement floors of the previous building of the 12th century parish church, while the upper floors raised the tower to 64 m in 1771, thus dominating the silhouette of the lower town. The figurative and ornamental decoration of the facade was made in terracotta around 1510, perhaps by Benedetto Briosco . The interior appears extremely ancient with its small upper windows and the cube capitals . The furnishings include a presumably French crucifix from the mid-14th century, during the Renaissance around 1495 the altar wings with saints, which were still painted on a gold background, a triptych from 1511 (Madonna between Saints Cosmas and Damian) and a group modeled in terracotta were created the Descent from the Cross from the early 16th century. The organ with its classicist case was installed around 1780, the painting of the building dates from the middle of the 19th century.

An older chapel in the upper town was enlarged for the Dominicans around 1370 into an unusually north -facing stepped hall in the Lombard building tradition. In 1376 a campanile was added to the west , from 1472 the margraves had the church expanded to the north as a basilica and a new choir built as a burial place for their dynasty by 1507 . The monastery existed until 1802. The hillside situation required considerable substructures for support. Stylistically, an influence of the French late Gothic can be recognized, therefore and because of the high quality of the workmanship, the involvement of Burgundian builders is assumed.

The former prayer house of the Jews in the former ghetto at Via Deportati Ebrei No. 29 in the lower town is an outwardly unadorned building from the 18th century, which contains an iconographically remarkable painting from the Baroque period on the upper floor. See the main article Synagogue (Saluzzo) .

The aristocratic palace, typical of the Piedmontese Renaissance, was expanded in 1525 and well restored in the 1880s. Today it houses the municipal museum with a regionally important art collection. The testimonies to the life and work of the Saluzzo-born writer Silvio Pellico are currently not on display.