This article describes the Italian writer. The place of the same name Silvio Pellico (Córdoba) in Argentina is named after him . 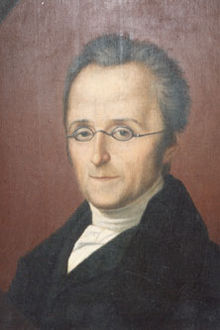 Pellico came from a conservative religious family and was the son of the merchant and casual lyricist Onorato Pellico . Due to Napoleon's expansive policy, the family went into exile in Pinerolo . Pellico completed his school days there and began his first literary attempts. Between 1805 and 1809 Pellico lived with a relative in or near Lyon . During this time he was particularly concerned with modern French literature.

After the political situation in northern Italy had calmed down somewhat, he returned with his family in 1810 and at the age of 20 became a lecturer in French at the cadet institute in Milan . After the fall of Napoleon, Conte Lambertenghi entrusted Pellico with the upbringing of his children. There Pellico a. a. Germaine de Staël , August Wilhelm Schlegel , Lord Byron , Henry Brougham, 1st Baron Brougham and Vaux , and other famous people. During this time he made friends a. a. with Vincenzio Monti and Ugo Foscolo , who like him wanted to get rid of the Austrian occupation. In 1819 Pellico made his debut with his drama Laodicea , which was very little successful. Much greater success (which continues to this day) he achieved with his tragedy Francesca da Rimini .

Since 1818 he has been a major contributor to the political magazine Il Conciliatore . In it he published his political articles in which he repeatedly called for the unity of Italy. Next to him wrote u. a. Alessandro Manzoni , Giovanni Berchet , Gian-Domenico Romagnosi and Massimo Taparelli for the same purpose. In 1819 this magazine was banned, but this did not prevent Pellico or his friends from continuing to agitate politically. In 1820 Pellico was suspected of being a member of the Carbonari and u. a. arrested with Piero Maroncelli and Conte Federico Confalonieri .

In the same year, Pellico's tragedy Eufemia di Messina was allowed to be published, but only with the assurance that it would never be performed.

In a trial that did not really deserve the name, Pellico was sentenced to death in 1824 and locked in the lead chambers , the former prison of the Doges of Venice , until the sentence was carried out . Through an act of grace by the Emperor of Austria Franz I , the death penalty was converted into a 15-year prison sentence. Pellico served his imprisonment in the fortress Spielberg near Brno in Moravia .

When Pellico was released early in 1830 at the age of 41, he was a broken man; Physically badly marked, he lived withdrawn until the end of his life and abstained from any political activity. With the processing of his imprisonment, which flowed into Le mie prigioni , Pellico created a work with which he earned international fame. 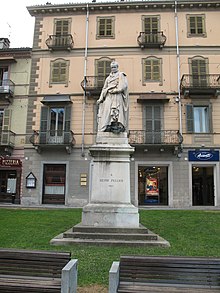 Monument to Pellico in Saluzzo, erected in 1863

Pellico spent his last years in Turin . He earned his living as a librarian and secretary to the Marquise Giulia Falletti di Barolo . Silvio Pellico died in Turin on February 1, 1854 at the age of 65.

With Le mie prigioni Pellico created one of the most important books of the Risorgimento . International fame was based on credibility and a return to belief. It was recommended as school reading in Italy until after the Second World War . With his stage works, which reveal some of the influence of Vittorio Alfieri , Pellico stands between classicism and romanticism . His life and work are honored in a museum in the Casa Cavassa of his birthplace .

In Trieste there is a Silvio Pellico theater .