The fortress Spielberg (Czech: Špilberk ) is located in the South Moravian town of Brno in the Czech Republic . It has a checkered history as a medieval castle , fortress , barracks and prison . Today there are exhibitions and a restaurant in it . The complex is a cultural place and an excursion destination for the people of Brno. Due to its location on a hill, it offers a good view of the city. 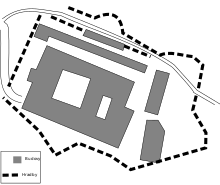 Floor plan of the fortress Spielberg

The former fortress Spielberg is located on an elevation (282 m above sea level) above the old town of Brno.

Spielberg Castle was built in the second half of the 13th century and has undergone several changes over the centuries. Initially it was the Gothic castle of the Bohemian kings and the seat of the Moravian margraves. In the middle of the 17th century it was expanded into a mighty baroque fortress . In the middle of the 18th century, together with the then fortified city of Brno, it formed the most important bulwark in Moravia .

The casemates , completed in 1742, were an important part of the fortress. They should provide protection for a 1,200-strong military corps. Ultimately, however, only depots for military material were housed here. In 1783, on the decision of Emperor Joseph II , a prison for the most dangerous and worst criminals was established there as part of the reform of the Austrian prison system. In 1785 the southern part of the casemates was converted into a prison and named the Leopoldine wing. The common use as a military fortress and civil prison was problematic.

After the destruction of important parts of the fortress by the withdrawing Napoleonic army in 1809, the fortress lost its military importance. The entire Spielberg Fortress became a civilian prison from 1820. Under Franz Joseph I , the facility was again used as a military prison and barracks in 1855 .

The castle fountain is of medieval origin. Between 1716 and 1717 its original depth was increased from 39 m to 112 m, so that the bottom was below the water level of the Svratka River in Old Brno. The upper part of the well is made of natural stone and bricks, while the lower part consists only of rocks. The average diameter is 3.5 m. The water level is 90 m, so that a water volume of over 1,000 m³ is available. At the bottom of the well there are two horizontal shafts with a length of 17 and 26 meters respectively.

With the destruction of the castle in 1809, the Napoleonic troops filled in the well, but it was exposed again in the following years. Above the well was a well house with a wooden wheel that was driven by convicts to bring up the water. This house was only demolished in the years 1939–1941 by the German Wehrmacht. The last cleaning work in 1990 and 1991 involved research, and 308 m³ of material was removed from the well. Interesting finds were uncovered, which are exhibited in the museum of the castle. Among these there is also a skeleton of a soldier from the end of the 19th century. But his identity is unknown.

There is still a baroque cistern near the fountain , in which the rainwater from the surrounding roofs was collected.

Since 1990 there has been a carillon on the back wall of the castle courtyard , which consists of 15 bells weighing between 16 kg and 220 kg.

The casemates are laid out as a two-story military shelter (for 1,200 men) with an attached dungeon below the castle buildings. Franz Freiherr von der Trenck was imprisoned here from 1746 to 1749 ; his remains are in the crypt of the Capuchin monastery in Brno's old town. In 1783, Emperor Joseph II had the upper floor of the northern casemates converted into a prison. In 1784, by imperial decree, those sentenced for life were quartered in the casemates on the lower floor . For this purpose, 29 single cells made of boards were created in which the prisoners were forged .

Spielberg became the most feared prison in the country. It was considered escape-proof. Even the nationwide tale of a single prison break ever at Spielberg Castle by the then very famous Czech robber Babinsky is just one of his many personal legends. This was distributed by himself as a former Spielberg prisoner with the number 1042 after his release. In 1785 the upper floor of the southern casemates was converted into a prison. From 1822 the Italian poet Silvio Pellico was there as a political prisoner. After his release in autumn 1830, he wrote his memoirs “Le mie prigioni”, which made the Spielberg prison known throughout Europe.

In 1855, Emperor Franz Joseph I converted the previous civil prison into a military prison . With the opening of the new penitentiary in Karthaus in 1857, the first serious criminals were transferred there. In 1880 the casemates were opened to the public.

During the Second World War , the German Wehrmacht established itself in Spielberg. The latter made considerable structural changes to the casemates in order to make them usable as a protective cellar . The Gestapo set up a notorious prison here to lock up resistance fighters and opponents, many of whom died there.

Extensive renovation work took place between 1987 and 1992. The state of the late 18th century was to be restored, i.e. the time before the fortress was converted into the notorious dungeon of the Josephine era.

In addition to a tour of the dungeon and the casemates, there are changing exhibitions and installations on the city and history with numerous documents in the rooms of the castle. A restaurant and an observation tower in the inner part of the castle complex offer a beautiful panorama of parts of Brno. Concerts take place regularly in the courtyard of the castle in summer .

Castles and chateaus in the South Moravia region