The lifetime (even lifelong ) imprisonment in many countries where the death penalty is abolished, the highest penalty that the criminal knows. Within Europe , life imprisonment has been abolished in Bosnia and Herzegovina , Croatia , Montenegro , Norway , Portugal and Vatican City . Spain has it in 2015, Kosovo and Serbia Reintroduced in 2019.

In the sanctions law of antiquity and the Middle Ages , deprivation of liberty played only a very minor role as a punishment. Usually only perpetrators were sentenced to life imprisonment if they were actually supposed to be executed , but were pardoned by the respective ruler or - in the case of inquisition trials  - revoked their teachings or their beliefs out of fear of death.

In Germany, life imprisonment is a deprivation of liberty for an indefinite period. After at least 15 years imprisonment, the penalty can for parole be exposed, in this case, the probation period of 5 years ( § 57a of the Criminal Code ). On March 31, 2017 51,643 people were in the Federal Republic of Germany as a whole in prison (48,609 men and 3,034 women), of whom 1,831 sentenced to life imprisonment (1,720 men and 111 women) and 561 in preventive detention (560 men and one woman). Preventive detention is not a prison sentence, but a measure of reform and security . However, it can mean life imprisonment for the convicted person.

Design of the legal consequences

The life imprisonment is defined in Section 38 (1) StGB as an exception to the early imprisonment, as its duration is indefinite. If there is a legal mitigating reason, they are replaced by a prison sentence of 3 to 15 years ( Section 49 (1) No. 1 StGB).

According to Section 54 (1) StGB, only one life imprisonment is formed as a total sentence out of several life imprisonment sentences . This regulation was introduced by the 23rd StrÄndG of 1986 ( Federal Law Gazette I p. 393). Since then, judgments such as "twice for life for double murder" are no longer permissible. In this case, however, the convicted person is often attested in the verdict as having "particular severity of guilt".

In juvenile justice , the life sentence does not apply. Here the maximum penalty is 10 years youth penalty , for adolescents who are convicted of murder under youth criminal law, 15 years youth penalty if 10 years is not enough due to the particular gravity of the guilt ( Section 105 (3 ) Youth Court Act ).

In the case of adolescents who are convicted under adult criminal law, a prison sentence of 10 to 15 years can be recognized instead of the possible imposition of life imprisonment ( Section 106 (1) Youth Court Act).

A condemned person must be given the fundamental and legally stipulated possibility of regaining freedom at some point. Only the possibility of pardon after z. B. 30 or 40 years imprisonment is not enough. According to a decision of the Federal Constitutional Court of June 21, 1977, this is dictated by the rule of law and human dignity ( BVerfGE 45, 187 ). The life imprisonment is just compatible with the Basic Law in accordance with the reasons for the decision, but never as an absolute penalty in the sense of a pre-determined sentence up to death. The demand for a referendum on the reintroduction of life imprisonment, which constitutes a pre-established sentence up to and including death, was classified as unconstitutional by the Federal Constitutional Court in 2017 in its ruling on the second NPD ban proceedings .

Accordingly, the conditions for early release on five-year probation are set out in Section 57a ​​of the Criminal Code :

A life imprisonment can end prematurely in individual cases due to incapacity for detention or a pardon . The prisoner must also be given leave of detention under certain conditions ( Section 13 (3) of the StVollzG).

Statistical data on length of detention

The Criminological Central Office has been collecting data on life imprisonment every year since 2002. According to this, a total of 760 people were regularly released from life imprisonment from 2002 to 2015 inclusive (i.e. according to Section 57a ​​of the Criminal Code). On average , they were imprisoned for 18.9 years ( median : 17.0), 13% of them for more than 25 years. This information does not include 235 people sentenced to life imprisonment who were transferred abroad and 24 whose imprisonment was interrupted for health reasons ( Section 455 of the Code of Criminal Procedure). Also not included are those who remained in custody during the survey period, as well as 127 prisoners whose imprisonment actually lasted for life because they died while in custody (29 of them by suicide).

Well-known extreme cases are, for example, Heinrich Pommerenke , who died in a penal hospital in 2008 after 49 years in prison, the so-called “ midday murderer ”, who was released from prison in 2015 after almost 50 years, and Hans-Georg Neumann , who died in 2021 after 59 years in prison the parole was ordered.

In German law, the Criminal Code (StGB) and the International Criminal Code (VStGB) provide for life imprisonment for various intentional offenses. In fact, life sentences are imposed in Germany almost exclusively for murder ( Section 211 StGB). From 2007 to 2015 there were, according Criminological Central Office 931 sentences to life imprisonment, of which 915 for murder (98.3%). That was hardly any different before 2007 and has been “in the Federal Republic since the Basic Law came into force”.

A life sentence is mandatory for the following offenses:

For certain offenses, the range of punishment is "life imprisonment or imprisonment not less than ten years":

The same range of penalties applies to some qualification offenses in which the death of another person was at least carelessly caused:

In two of these qualification offenses, however, death must be brought about willfully:

For certain crimes against external security , a life sentence is provided as an alternative to a prison sentence of at least five years:

With the exception of murder and the crimes under the International Criminal Code, all of the above-mentioned crimes expire after 30 years ( Section 78 (3) No. 1 of the Criminal Code).

In Section 18 of the Criminal Code (StGB), the Austrian legislature standardized the term of imprisonment, which can either be imposed for a specific period of time (a maximum of twenty years) or “for life”. The imposition of the life sentence is according to § 36 StGB i. V. m. § 19 JGG excluded for persons who were not yet 21 years old at the time of the crime . Section 46 (6) of the Criminal Code regulates the possibility of conditional release : 15 years must have been served; and it must be assumed that the convicted person will not commit any further criminal acts. After the conditional release, the probationary period is 10 years ( Section 48 (1), last sentence, StGB ).

Offenses that are threatened with life imprisonment

Life imprisonment is predominantly imposed for crimes that were intentionally committed and which resulted in the death of at least one person. An exception to this can be assisted suicide; the maximum prison sentence for this offense is five years. Offenses not related to the death of a person can also be punished with life imprisonment, for example the manufacture and distribution of weapons of mass destruction and organized drug trafficking, if the perpetrator holds a leading position in the organization concerned. Only for genocide (Section 321 of the Criminal Code), certain forms of crimes against humanity (Section 321a of the Criminal Code) and certain forms of war crimes against persons (Section 321b of the Criminal Code) is a life sentence required; in all other cases it can be an alternative to a temporary limited criminal detention. The Austrian criminal law provides for life imprisonment as a threat of punishment for the following offenses :

Offenses in core criminal law (regulated in the Criminal Code)

The Swiss criminal law allows under Art. 40 "life-long imprisonment ," "where the law expressly provided" as maximum punishment. In the other cases, the maximum duration of the imprisonment is a maximum of 20 years.

Life imprisonment can be imposed for the following criminal offenses: murder ( Art. 112 StGB ) and genocide ( Art. 264 StGB), serious case of attack on the independence of the Confederation ( Art. 266 No. 2 Para. 2 StGB) and especially serious case of hostage-taking ( Art. 185 No. 3 StGB), crimes against humanity ( Art. 264a No. 2 StGB) or war crimes ( Art. 264c-h StGB). As in the German-speaking neighboring states, the prisoner must be given the chance to lead a life in freedom again at some point. After 15 years, in the special case even after 10 years, the person sentenced to life imprisonment can be conditionally released by the authorities ( Art. 86 (5) StGB). Relaxation of enforcement in the form of work and residential exemption according to Art. 77a StGB is also possible in the case of life imprisonment.

Further offenses, which are threatened with life imprisonment, exist in the Swiss Military Criminal Law . These are, in particular, certain cases of disobedience to the enemy, mutiny before the enemy, cowardice before the enemy, surrender, crimes on guard duty before the enemy, espionage and betrayal of secrets, military treason, rioting, service in an enemy army, other favoring the enemy , Looting, war robbery or hostage-taking.

In addition to lifelong imprisonment, the Swiss Criminal Code also provides for custody as a measure that can extend beyond the regular execution period of lifelong imprisonment ( Art. 64 ff. StGB). This is not a form of punishment, but a form of averting danger. The so-called custody initiative ( Art. 123a of the Federal Constitution ), submitted in response to the murder on Zollikerberg and accepted by the people in 2004 , has since determined: “If a sexual offender or violent offender is considered extreme in the reports that are necessary for the court judgment Considered dangerous and classified as untreatable, it must be kept until the end of its life because of the high risk of relapse. Early release and imprisonment leave are excluded. "

In October 2010, a criminal was convicted of life in custody for the first time in Switzerland . The judgment is final.

In the United States, since the Sentencing Reform Act was passed in 1984, federal life imprisonment has generally lasted until the convict's death. Since then, after November 1, 1987 , offenders convicted by a federal court have not had the option of early release. Only the President of the United States can be a pardon ( Pardon say) or by shortening the penalty ( Commutation allow) a release.

In the individual states , however, different rules apply, in many places the convict is given the right to a second chance. In most cases, a sentence is already imposed in the judgment, which combines life imprisonment with a minimum serving time, after which a release can take place, e.g. B. "15 years to life" or "25 years to life". In other states (similar to Germany) there is a law stipulating the minimum imprisonment period after which a person sentenced to life imprisonment can apply for parole. B. after 40 years and in California after 50 years. Since no total sentence is usually imposed in common law , the addition of several sentences can result in a total imprisonment that exceeds the life expectancy of the offender, for example a 200-year sentence. There are also known processes in which prison sentences of several thousand years were recognized. The long serving times are mainly explained by the fact that in many US states the imprisonment of serious criminals until their death is seen as the only acceptable alternative to the death penalty : Society should be protected, the serious criminal does not get a "second chance", but is potential a change of judgment is possible at any time.

As a rule, government officials can issue a pardon or amnesty . But there are also a number of states that have no option for early release on life imprisonment, whether on parole or pardon. 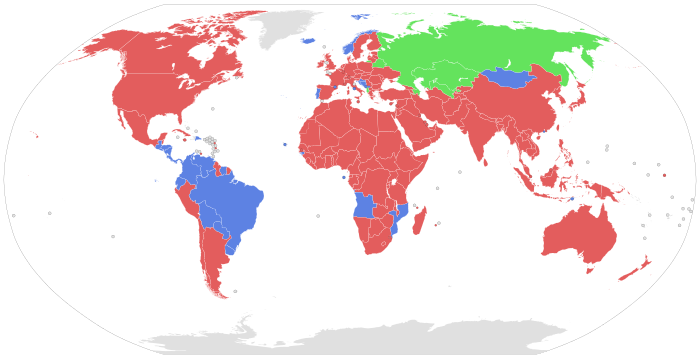 Legal basis at a global overview:

In July 2013, the following laws existed in the member states of the Council of Europe:

Again and again voices from associations and legal scholars are loud to forego life imprisonment completely. Here, critics use the following arguments: