Jacob Rupertus, from patent specification Austria No. 3202, "lock for firearms" 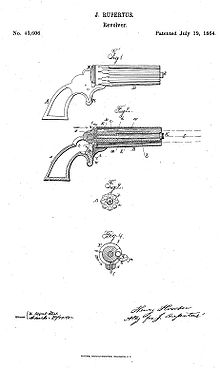 Jacob Rupertus, original drawings of patent specification US43606 for the bundle revolver "Pepper-Box"

In English Patent No. GB 1899 17520 his home address is given as: "JACOB RUPERTUS, of 5519, Royal Street, Germantown, in the City and County of Philadelphia, and State of Pennsylvania, United States of America". His company, the Rupertus Patented Pistol Manufacturing Company, which was active between 1859 and 1899, was located in Philadelphia , 1924 North 4th Street. The former company buildings on the corner of North 4th Street and W. Hewson Street no longer exist in 2010. In particular, the “Pepper-Box” bundle revolvers from Rupertus are known, of which around 3,000 were manufactured. In the late 1860s, under the name “Straight Line”, he produced a number of single-shot pocket pistols in .36 caliber, barrel length 3½ "and 4¼", few of these cheap products bear the label RUPERTUS / PAT'D. He also produced revolvers and single- barreled shotguns .