The Lednice Castle (German: Eisgrub ) in the Czech Republic was built in numerous construction phases by members of the Princely House of Liechtenstein , has been presented in neo-Gothic style since the 19th century and - together with its park - is now part of the Lednice-Valtice UNESCO World Heritage Site .

The Lednice Castle is located in the town of Lednice in břeclav district (formerly Lundenburg ) in the northern part of the Lednice-Valtice . The castle has a large English-style park on the banks of the Thaya with a number of staffage buildings and lines of sight, including a 7 km long avenue to Valtice Castle ( Feldsberg Castle ), also a Liechtenstein castle.

View in the 18th century

A fortified manor has been occupied at the site of the castle since the 14th century . At that time it belonged to the Liechtenstein family, who from the 1630s expanded the park and from the 1680s the buildings.

The first expansion of the complex in the baroque era was still relatively modest: the "castle" (at that time probably still a villa ) had a single-storey central wing with only three axes and flanked by two towers. But at least the architect Johann Bernhard Fischer von Erlach is said to have been involved in the renovation . The ensemble also included a church dedicated to St. James . Prince Johann Adam I (1662–1712) entrusted Johann Bernhard Fischer von Erlach with the construction of stables and a riding hall for his castle.

Before the middle of the 18th century, Prince Josef Wenzel von Liechtenstein had the facility rebuilt. The villa (now the central wing) was extended, the ballroom was converted into a palace theater and the decoration was made in Rococo . The south-facing courtyard was added, for the construction of which the Gothic Church of St. James was demolished. The present church was mainly built in the 19th century.

Prince Karl Eusebius of Liechtenstein (1611–1684) commissioned his master builder Giovanni Giacomo Tencalla in 1632 to design the park with water arts. This park was located in the area south of the Plamenhaus on the area that is now designed as a formal garden. A second garden was located north of the castle and stretched as far as the Thaya , the course of which, however, was much closer to the castle than it is today. The opposite bank was designed as a forest backdrop with a swath that allowed a distant view of the landscape.

This northern part of the park could also be entered from the castle through a grotto . Its construction was finished in 1686. The northern garden extended over the slope down to the Thaya, was richly structured and laid out formally. This part of the garden existed well into the 18th century, is documented by an engraving in 1720 , but was removed before 1789.

From the beginning, the avenues leading from the castle and its park were an important element in their relationship to the surrounding landscape. First attempts to plant conifers on them failed. These were replaced by linden , horse chestnut , oak and poplar .

The castle in classicism

The park in classicism

Before 1789, the baroque park immediately north of the palace was also given up and replaced by a classicist design: the numerous terraces were leveled and a continuous slope was created. Straight paths and beds emphasizing the longitudinal axis were laid out between the castle and the river.

After 1781, Isidore Canevale was responsible for the parks of Schloss Eisgrub and Schloss Feldsberg (today: Valtice). He was succeeded by Joseph Hardtmuth . The latter then already relied on the "modern" garden design ideas of the English landscape park. During this time the old bath house (1794) and - as the center of the park at that time - the Chinese pavilion (1795, demolished: 1882) and a sun temple as the center of an eight-axis hunting star . The Chinese pavilion was decorated with silk wallpaper that came from the Petit Trianon of the Palace of Versailles . The wallpaper and other chinoiserie were later in the Belvedere in the park of the castle Feldberg translocated . In 1799 there was a landing stage for boats with a portal made of whale ribs . At the beginning of the 19th century, additional staffage structures followed , such as the minaret (completed in 1804) and the Hansenburg (completed in 1808).

The park in the 19th century

The redesign of the park under Prince Johann I Josef and his economic adviser Bernhard Petri , which was started in 1805 and completed in 1811 and followed the English models, was decisive . That happened much earlier than the redesign of the castle building in the "English style". Petri had already laid out an English landscape garden for Johann I near Loosdorf Castle .

The new park was created by diverting the Thaya River and digging a new pond there. With the excavation, islands were modeled in the pond and the rest of the park area was raised by 60 to 100 cm. This and the new river bed of the Thaya protected the park from flooding. Up to 700 workers were employed on the project, moving 500,000 cubic meters of earth and all of this cost the prince two million guilders . The castle pond and neighboring water areas are now used by many water birds as breeding and resting places and have been under nature protection as the Lednické rybníky national nature reserve since 1953. The staffage structures of this new park are based on ancient models. A “ Roman aqueduct ” with a grotto (1805), the “New Bathhouse” (1806) and the “Temple of the Muses” (1807/1808) were created. Only the line of sight between the castle and the minaret remained.

In 1845 a palm house was built in the garden, which was later connected to the main building when the palace was renovated. Plants for the garden were also imported from America by Prince Alois I. Under the garden director Wilhelm Lauche , who looked after the complex from 1883 to 1936, some of the staffage structures were removed. Their optical function as an eye-catcher was replaced by plantings with striking trees.

The gardens immediately north of the palace were gradually adapted to the English landscape park between 1880 and 1904. Another garden was created at this time to the west of the castle, beyond the stables. For this purpose, the prince bought up the corresponding areas and had the buildings there torn down. However, this part of the park was lost again in the period after 1945.

The castle in the 19th century 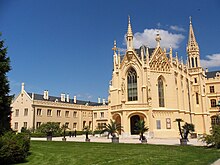 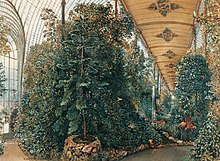 View of the palm house , the winter garden of the castle 1842 ( watercolor by Rudolf von Alt )

At the beginning of the 19th century, there was another renovation that affected the princely apartments - now in the classicism style - and a three-axis passage through the building was broken to allow a distant view of the minaret . From 1805 Joseph Hardtmuth was entrusted with the work. Other architects who worked on the palace complex in the following years were Joseph Kornhäusel and Franz Engel . Joseph Kornhäusel redesigned the palace in the Empire style and built new representative rooms on the east side.

From 1836 Prince Alois II assumed the position of head of the House of Liechtenstein. In contrast to its predecessors, which were culturally oriented towards France, it was based on English taste. First according to plans by the architect Peter Hubert Desvignes , then according to plans by Georg Wingelmüller from 1845, the palace was rebuilt in the neo-Gothic style between 1846 and 1858 (then: "Old English style"). The existing building fabric was largely reused and some details of the interior were also preserved - such as the ancestral hall designed in Rococo. Both the prince and the architect had studied this romantic style during stays in Great Britain . The shell was finished in autumn 1847: eight wings with four courtyards. The expansion took place after the death of Wingelmüller in 1848 by Johann Heidrich . The palace was also structurally connected to the palm house and thus received the “largest winter garden in the world”.

The courtyard in front of the main facade is framed on the right by a wing of the building and on the left by the castle church built around the baroque core. The representative rooms are located in the middle wing and the two east wings and are explicitly oriented towards the park. The same applies to the apartments of the Prince and Princess on the first floor of this wing. Above that was another floor for the couple's children, their governesses and guests. The library with a spiral staircase that leads to the ancestral hall should also be emphasized . Even if the castle was stylistically oriented backwards towards an imagined Middle Ages , the built-in technology was highly modern: It was heated with hot air and a bathroom with running warm water.

In the land reform of Czechoslovakia , which was newly founded after the First World War , the Liechtensteiners lost 60% of their property. Investments in the plant came to a standstill. At the end of the Second World War, the holdings of the former imperial and royal naval library were stored here . When the Princely House was expropriated without compensation in 1945, first Czechoslovakia and later the Czech Republic took over the facility. All political and judicial efforts of Prince Hans Adam II after the Velvet Revolution to return the expropriated property (besides the Lednice and Valtice castles, another 15 castles, 1,600 square kilometers of land and various industrial companies) failed due to the resistance of the Czech government.

The palace park today has 614 different types of wood. After 2000, beavers entered the park and fell several hundred trees each year.

Together with the castles Hluboká nad Vltavou , Žleby , Sychrov , Hradec or Bítov , the Lednice chateau belongs to the final phase of aristocratic residences in the Bohemian crown lands, when the romantic neo-Gothic demanded sophisticated art forms around the middle of the 19th century.

The castle is one of the most visited architectural monuments in the Czech Republic.

Castles and chateaus in the South Moravia region