This article deals with the river Thaya, for more see Thaya (disambiguation) .

The Thaya ( Czech Dyje ) is a tributary of the March . It has a length of 235.4 kilometers and a very winding course. A large part of it runs along the state border between Austria ( Lower Austria ) and the Czech Republic ( Moravia ), but rarely forms the exact border.

The name of the water is derived from the East Germanic term * Dūhja, which means something like "mud" or "swamp".

According to another explanation, the name of the water comes from the Indo-European root * dheu- "flow", which was transformed into dujas during Roman times , from which the Slavs in the 7th or 8th century derived the forerunner of the Czech name Dyje . The Bavarian settlers of the Marcha orientalis took over the name Dyja and corrupted him to Taja . The Chronica Boemorum mentions the Czech river Dyje in 1082.

Charles Sealsfield Memorial near his home village of Poppitz 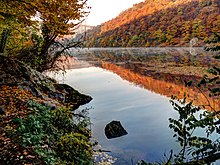 Autumn at the reservoir near Znojmo

It has two source rivers, the German Thaya and the Moravian Thaya , which unite in Raabs . The Deutsche Thaya rises in the Waldviertel near Schweiggers at an altitude of 657.5  m and flows through Vitis , Schwarzenau , Waidhofen an der Thaya , Thaya , Dobersberg , and Karlstein an der Thaya . The most important tributary of the German Thaya is the Thauabach . At 76 km, it is the longer of the two source rivers.

The Moravian Thaya ( Moravská Dyje in Czech ) rises in the Bohemian-Moravian Highlands . The river runs along Žatec and Dačice to Austria, where it joins the German Thaya after 68 km in Raabs.

The Alte Bockgraben is the former river bed of the Thaya.

In the middle reaches the Thaya has dug itself deep into the landscape (height difference of the slopes about 100 m). This distinctive profile is the construction of numerous castles and palaces high above its banks favored ( Castle Karlstejn , castle ruins Kollmitz , Drosendorf , Hardegg Castle , Ruin Kaja , Burg Raabs an der Thaya ).

The Vranovská přehrada ( Vranov dam ) is located near Frain . The Thayatal National Park was established in the area around Hardegg, on both the Austrian and the Czech side .

In the lower reaches from Znojmo ( Znojmo ) the river is dammed in several places, the largest reservoirs are those of Nové Mlýny ( Neumühl ) between Dolní Dunajovice ( Untertannowitz ) and Hustopeče ( Auspitz ), into which the Svratka and the Jihlava join immediately after their confluence River Ivaň . In Znojmo the river is crossed by the Znojmo Railway Bridge, known as a technical monument .

The Thayamühlbach is branched off just after Znaim and flows back into the Thaya after Laa an der Thaya . The park of Lednice Castle ( Lednice ) was created by the Thaya River was diverted. A large lake with many islands was created.

Important places on the Thaya

In May 1936, when an overloaded cable ferry went down in Nové Mlýny ( Neumühl ), 31 children from Rakvice ( Rakwitz ) drowned on their school trip.

After the Thaya had already caused the highest flood in the last 100 years in March 2006, the level rose to its highest value within a few hours during the night due to heavy rain in the upper reaches of both the German and the Moravian Thaya for 300 to 400 years. 1500 buildings were flooded in around 70 locations. The city of Raabs was hardest hit , where the water level of the German Thaya rose to 6.60 meters. The normal level is 1.20 m, at the flood of 2002 it was 6.20 m.