The title of this article is ambiguous. Further meanings are listed under Cuneo (disambiguation) .

Cuneo ( Piedmontese Coni ) is a city in the Piedmont region with 56,203 inhabitants (as of December 31, 2019) in northern Italy and the capital of the province of Cuneo .

Cuneo is the seat of the diocese of Cuneo . The patron saint of the city is San Michele .

Cuneo lies at an altitude of 534  m slm and extends over an area of ​​119  km² . The village of San Rocco Castagnaretta also belongs to the municipality.

A legend tells of the fact that in the early Middle Ages the scattered local population instigated a rebellion in the face of constant attacks by the Marquis of Saluzzo . During this, relatives of the Marchese were killed at a wedding party of a local landlord, whereupon the rebels withdrew to an easily defensible area, on the plateau between the rivers Stura and Gesso, the area of ​​today's Cuneo, for fear of the Marchese, which is described as tyrannical .

The first written mention of the city of Cuneo dates from July 23, 1198, when the place was named "libero Comune" ("free municipality"). The name of the city is derived from the Italian expression for "Wedge Point", "pizzo di Cuneo", and refers to the geographical location on the plateau between the Stura and Gesso rivers . The cathedral of Cuneo also dates back to 1198. In the Middle Ages, the city was considered strategically important due to its location. In 1382 the city voluntarily came under the control of Amadeus VI. of Savoy , who turned Cuneo into a fortress . Especially between the 16th and 18th centuries, the city and the region were often the scene of armed conflicts. 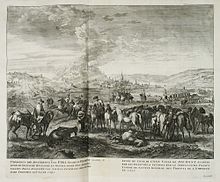 Through the armistice of Cherasco (1796) , through which the Kingdom of Sardinia-Piedmont was eliminated from the first coalition war against France, Cuneo was ceded to France together with Ceva and Tortona . In 1799, after ten days of bombardment, it was captured by Austrian and Russian armies. In 1800 the French razed the fortifications after the victory of Marengo . According to the final act of the Congress of Vienna , Cuneo fell back to Sardinia-Piedmont in 1815.

Not least because of the battles and sieges, the buildings of early Cuneo were largely destroyed. The church of San Francesco is one of the few buildings from the 15th century that still exist today, along with the cathedral. Today's old town is dominated by buildings from the 17th and 18th centuries, the new town by closed buildings from the late 19th century; A special feature are the almost uninterrupted arcades over wide sidewalks along the two main streets, Via Roma and Corso Nizza. The central square connecting the two districts, the Piazza Duccio Galimberti, dates from the 19th century.

Cuneo is on the European route E74, which leads from Asti via Cuneo and the Colle di Tenda to Ventimiglia on the Mediterranean.

In addition, Cuneo is the starting point for the railway lines to Turin and Nice / Ventimiglia . The routes to Saluzzo and Mondovì have been operated without passenger traffic since 2012.

Cuneo has a commercial airport .

Cuneo has twinned cities with