The title of this article is ambiguous. Further meanings are listed under Saline (disambiguation) . 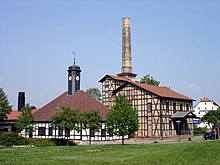 Remarkably, the German-speaking area is the only one that uses the saline term for the two completely different types of salt production. In other linguistic areas, the term is used exclusively for salt production through the evaporation of sea water. The boiling of the brine as a post-processing process has no independent meaning there.

Not to be referred to as a saline

A distinction should be made between salines and graduation towers , in which the salt content of the brine was increased through evaporation in order to save valuable fuel. The saltworks and graduation house together are called salt works in technical terms .

Siedesaline n make up the largest share of salt production in industrialized countries. The end product, the so-called brewing salt or evaporated salt , is obtained by sustained boiling and thus evaporation of a salt solution ( brine ). The after precipitation remaining of the salt brine is a residual lye or residual brine , dated as Bitter Sole called (which, among other things still dissolved magnesium sulfate is still generally Epsom salts called) and is including as a coagulant in the production of tofu (see nigari ).

To produce the brine in many salt pans, hot fresh water is pumped under high pressure into underground rock salt deposits. There the salt dissolves in the water and the brine obtained in this way is pumped back up and then evaporated. In the past, brines from salty springs were also used, which were naturally enriched with salt underground. Since such sources are rare, they only play an insignificant role for today's industrial production. Sometimes (of course, pre-concentrated) seawater was boiled in salt pans, e.g. B. on the small Danish island Læsø .

The buildings used as salt pans are also known as brewhouses or boiling houses . In Austria , the term Pfannhaus was used until the end of the 19th century after the vessels used for evaporation, the salt pans . In large companies today, closed systems are used that have a higher degree of efficiency .

Today, an estimated 70 percent of world consumption is obtained from rock salt, although more precise information is difficult because many producing countries do not provide any information about the origin of their salt. The production facilities are often in the hands of large multinational companies such as Cargill or Compass Minerals International . There are currently five salt pans in operation in Germany. Together with the salt mines, the total production volume in 2003 was around 14.1 million tons of salt.

When extracting sea ​​salt , the salt water is first pumped into several evaporation ponds connected in series for pre-concentration. In each stage the degree of saturation of the brine increases and most of the gypsum is precipitated. The saturated brine is then pumped into crystallization ponds, in which the final evaporation takes place.

For a long time, the economic organization of the salt pans corresponded to that of agricultural businesses. Many French small businesses rarely cover more than 2 hectares and thus only offer a sideline for the salt farmers who work there. Larger, internationally operating companies such as the Compagnie des Salins du Midi et des Salines de l'Est in southern France and comparable companies in the USA are increasingly emerging .

Naturally, saltwater salines can only be created in coastal regions. Several prerequisites are necessary for successful operation.

In Europe , salt pans can be found in Brittany on the French Atlantic coast, on the Black Sea and on the Mediterranean , here at Salin-de-Giraud , the Ston saltworks or the Sečovlje saltworks . They are also found on the Canary Islands , on the Chinese Sea , on the Indian Ocean and in places in Central and South America . Few can be found even further north, for example in the Bay of San Francisco .

A special feature in Germany was a saltworks near the Stade nuclear power plant in Lower Saxony, which was operated with its district heating. When the power plant was shut down in 2003, the saltworks were shut down.

In eastern Tibet and the northern Yunnan Mountains, the existing salt springs in saline basins are used for salt production.

Many historical salt pans have been abandoned for economic reasons after the brining out, and will fall into disrepair if there is no further use. In Halle (Saale) you can find the saltworks of Halle's saltworkers, which were built between 1719 and 1721 and are regularly restored. The Halloren- und Salinemuseum Halle is located in the buildings , in which the historical salt production is regularly demonstrated in the form of a show boiling. In the north Hessian spa town of Bad Sooden-Allendorf , the history of the former saltworks with former production facilities and a salt museum can be easily traced, for example there is an elaborately restored graduation tower, which was partly integrated into a thermal bathing landscape . A positive example of successful use of the existing building is under ensemble protection standing Old Salt Works in Bad Reichenhall. A local developer has acquired the Brunnhaus, including the connected brewhouses, stores and workshops. The so-called source building itself still exists unchanged with the technology from the early 19th century and can be visited during guided tours. The remaining buildings have been extensively renovated and now house a medical center, a pharmacy, retail business, gastronomy, the Reichenhall Academy and the magazine 4 , which is used for cultural events.