Bad Salzungen (until 1923: Salzungen ) is a spa town in Thuringia ( Germany ). It is the district town of the Wartburg district . Since the beginning of 2009 the city has been a state-approved saltwater spa . 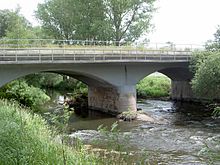 Bad Salzungen is located on the central reaches of the Werra , between the Thuringian Forest in the north and the Rhön in the south and belongs to the transnational region of Franconia . Bad Salzungen is surrounded by wooded hills and mountains with mainly agriculturally used valleys and plains.

→ Main article : History of the city of Bad Salzungen

Long before Bad Salzungen was first mentioned in a document, people who can be assigned to the Celtic culture (Leimbach burial ground) settled in the Werra Valley and the neighboring Rhön . Around the birth of Christ, the Rhine-Weser-Germanic tribe of Chatten settled in the area between Werra and Fulda , as well as further west. During the Franconian eastward expansion, between the 5th and 8th centuries, the Salzungen, located in the Thuringian Westergau , was also included in a network of Franconian fortifications. With the Frankish colonization of the East, the written traditions began. On January 5, 775, Charlemagne issued a deed of tithe donation from his Villa Salsunga to the Hersfeld monastery in the royal palace of Quierzy . This is the first documented mention of the town of Salzungen. In 841 the place came to the Fulda monastery . In the early 12th century the up-and-coming Counts of Henneberg expanded their domain in southern Thuringia to the central Werra. The Salzungen area was the (east) Franconian border region to Thuringia and Hesse.

In today's urban area of ​​Salzungen, several settlement centers developed around the year 1000. The power center of the region was formed by the Henneberg castle complex Frankenstein , its emergence as a fortification to protect the Breiter monastery foundations is said to have taken place in the first third of the 12th century. The lords of Salzungen later arrange the foundation of the Frauensee monastery and the Allendorf monastery (first mentioned in 1272) at the foot of their ancestral castle, in what is now the Kloster district . Decisively weakened by war and conquests and heavily in debt, the Frankensteiners had to sell their possessions in 1330. This shift in power was mainly used by the Wettins who sought to expand their sphere of influence towards the Rhön . The city, attested as civitas since 1306 , was ruled in realpolitical terms as a twin city with a Henneberg and a Saxon administrative seat; the income from the salt trade, from customs duties and trade was shared. The expansion of the city proceeded rapidly. The city fortifications with towers, walls and moat had four gates (Nappentor, Obertor, Lindentor and New Gate). With the discovery of more salt springs , the tax income rose, but so did the desires of the neighbors.

The Salzung Office was formed from the surrounding villages . The Reformation was introduced in 1524, and a year later, during the Peasants' War , the townspeople joined the Werrahaufen , an 8,000-strong troop from the upper Werra region, under massive threats . During the Thirty Years War , Salzungen was sacked by the Swedes on June 10, 1640, and in the same year the city came to Saxe-Gotha . From 1680 to 1918/1920 Salzungen was part of the Duchy of Saxony-Meiningen .

In 1868 the office of Salzungen was opened in the Meiningen district and, with this legacy, is also part of the historic Henneberger Land . Bad Salzungen was already connected to the railway network in 1858. This happened through the Werra Railway from Eisenach in the north to Coburg and Lichtenfels in the south.

With the beginning of the National Socialist era , committed citizens responded to the political persecution by forming resistance groups. A cemetery of honor was established in Rathenau Park in 1956 for the more than 250 victims of forced labor. On April 4, 1945, the city was occupied by American troops without a fight, and exactly three months later, according to the Allied agreements, the Red Army moved in . In 1950, Bad Salzungen became the district town of the newly established Bad Salzungen district through a regional reform in the GDR and, after the district reform in Thuringia, the district town of the Wartburg district .

Central building of the graduation house in Bad Salzungen, today the Kurhaus

Announcement from the Salzunger Tageblatt of July 25, 1923

At the graduation houses

The salt production, which was already practiced in prehistoric times, was already so profitable in the 14th century that there was a privileged wealthy pawnshop since 1321 . This was headed by so-called salt counts , who were elected annually. Since 1590, the salt extraction process, which is much more productive than the earlier process, has been used. As early as the 16th century, the salt springs were also used as medicinal products and these places were called Sauerbrunnen . In the 19th century the healing properties of the brine were used . The first bathhouse was built in 1821, from which an increasing spa business developed. In 1911 the city already had 5,000 spa guests. On May 31, 1923, the responsible Thuringian ministry granted the city's application to use the name Bad Salzungen .

The Saxon areas were reformed very early on . Martin Luther's family lived in neighboring Möhra until shortly before his birth.

The following communities and districts were incorporated into Bad Salzungen:

Blazon : "On a blue background a bishop in golden regalia with red shoes, in his right hand a golden crook and in his left hand a red book with a black cross."

Meaning: The oldest city seal from 1329 shows St. Boniface in the manner shown above. Bonifatius was a mission bishop and also worked in the areas of what is now Thuringia. To give the church a structure, he founded the dioceses of Würzburg, Büraburg and the diocese of Erfurt , which only existed for ten years and was then added to the archbishopric of Mainz. The Archbishop of Mainz also exercised secular power in Salzungen for a long time. The Fulda Monastery also had a great influence here for centuries. Bonifatius appears as patron in the coat of arms of Bad Salzungen. He holds the crosier in his right hand and the Bible in his left. Since the Fulda abbot also exercised secular power at that time, he appears as patron in the coat of arms.

The eye-catching half-timbered house with the turret on August-Bebel-Strasse in the village of Allendorf is reminiscent of the Reformation period . The pilgrimage chapel, built in 1499, later served as a residence for the shepherd and farmhand. When the monastery was secularized in 1528, there was no need for a sheep farm across the street. A turret was placed on top of the shepherd's house to accommodate the bell of the former St. Jacobus chapel. Later, a Saxon coat of arms, held by an angel, was attached to the top of the gable. The small building later became the parish hall and was given a clock tower around 1900. Since its inauguration on May 7, 1995, the now restored half-timbered house has housed the city museum, in whose rooms you can get an overview of the 1,230-year history of the city of Bad Salzungen. There are also special exhibitions on a wide variety of topics every 4 to 6 weeks.

Model of the graduation tower in the mini-a-thür ( Ruhla )

The castle lake and the old town of Bad Salzungen

Street at the town hall

The Burgsee is located in the city center . It has an area of ​​10.33 hectares and is 25.5 m deep. The Erlensee is a specialty - as an inland salt point with a rare halophyte flora , it was declared a natural monument as early as 1940.

With the Rathenaupark, Bad Salzungen has an extensive park that surrounds the Burgsee , which is located directly in the city center . The so-called Pushkin Park, which follows the course of the Werra , is also located in the spa area not far from the graduation house .

The three pedunculate oaks by the swimming pool, each over 200 years old , were placed under protection as a natural monument in 1956 .

The remains of the Allendorf monastery, the town church, the Husenkirche and the Wendelskirche are considered to be evidence of the church's history .

In the area of ​​the city of Bad Salzungen there are several monuments that deal with the history of the 19th and 20th centuries from different perspectives. On the one hand, the victims are commemorated among the forced laborers , prisoners of war and concentration camp prisoners in the Second World War , on the other hand, the German soldiers who died in the two world wars are remembered:

There is also the Wucke monument in Rathenaupark , a memorial column made from a Rhön basalt block, which was inaugurated on April 30, 1911 in memory of the poet and researcher of local history, legends and dialects, Christian Ludwig Wucke .

The city festival has been celebrated annually since 1992, which the city organizes with the support of local associations.

The station building of Bad Salzungen before the renovation

The station Bad Salzungen is located at the Werra Railway (Eisenach- Meiningen - Eisfeld ) and is the starting point of the railway line Bad Salzungen-Vacha , but without passengers.

The federal highway 62 runs through the city in the section Bad Hersfeld - Barchfeld . The federal road 285 , which leads to Mellrichstadt in Lower Franconia, begins in the urban area, branching off from this . The nearby federal road 19 (Eisenach – Meiningen– Würzburg ) can also be reached via the B 62 . The closest motorway entrances are approx. 30 kilometers away in Friedewald , Eisenach and Waltershausen (all federal motorway 4 ) and Meiningen ( federal motorway 71 ).

The city bus and regional buses are operated by the Wartburgmobil (VUW) transport company and its partners.

The regional daily newspaper Südthüringer Zeitung appears in Bad Salzungen, the content of which is largely identical to that of the local edition of the regional newspaper Freies Wort .

The Dr. Sulzberger Gymnasium is the only gymnasium in town with around 780 students. In Bad Salzungen there are also four primary schools , three regular schools , the main office of the municipal " Musikschule Wartburgkreis" and the adult education center of the Wartburgkreis, a state vocational training center with a medical college, two special schools and a higher vocational college for physiotherapy .

→ Main article : List of personalities from the city of Bad Salzungen