Leimbach is a municipality in the Wartburg district in Thuringia . The town of Bad Salzungen is the fulfilling municipality for Leimbach .

The municipality of Leimbach is located in the Werra Valley on the northern edge of the Thuringian Rhön.

Leimbach is surrounded by the district town of Bad Salzungen, in the southwest the community borders on the community of Dermbach and the Merkers district of the Krayenberg community .

The municipality of Leimbach consists of the following districts:

The Leimbach, which determines the place name, rises near Hohleborn and is an approximately 5000 m long left tributary of the Werra . Further tributaries are mostly nameless source streams in the floodplain.

View from the Zeppelinstein to Leimbach

The village of Leimbach was first mentioned in a document between 962 and 973. In the vicinity of the village, an important prehistoric burial ground from the pre-Roman Iron Age ( Latène Age ) was found and archaeologically examined as early as 1878 during gravel mining on the Werra . The objects found can be assigned to the Celts who settled in the Rhön .

Leimbach was initially owned by the Frankensteiners and passed to the Hennebergers in 1330 . The place was also the ancestral seat of its own noble family, those of Leimbach, which can be traced back to the period from 1146 to 1478. After their line was extinguished, it was taken over by the Haun, of which ownership passed to von Buttler zu Wildsprechtroda. Later Leimbach belonged to the office of Salzungen in the Duchy of Saxony-Meiningen .

On October 1, 1923, Kaiseroda was incorporated into Leimbach by the Thuringian state government. A year later the place was independent again.

The Protestant church was consecrated on the 4th Advent in 1927.

In 1950 Kaiseroda was incorporated again and has been part of Leimbach since that time. In 1955 there were 2121 inhabitants in Leimbach and 246 in Kaiseroda.

The district of Kaiseroda belonged to the Duchy of Saxony-Eisenach in the 18th century . It was created between 1736 and 1749 as a result of the abandonment of the Vockenroda settlement , which was often hit by Werrah floods , when its citizens settled again around the imperial court, which was built in 1709 . Before 1879 Kaiseroda belonged to the Tiefenort Justice Office, then to the Lengsfeld District Court district . In 1879, based on the census of 1875, statistical information on the place Kaiseroda was published for the first time. This year Kaiserroda had 18 houses with 107 inhabitants. The size of the Kaiserrodaer Flur was 130 ha of which farms and gardens 2.3 ha, meadows 17.4 ha, arable land 96.6 ha, ponds, streams and rivers 0.9 ha, paths, drifts, wastelands and orchards accounted for 12, There was no 7 hectare forest. The Kaiserroda livestock included 8 horses, 95 cattle, 174 sheep and 34 pigs.

The Leimbach municipal council is made up of 12 councilors.

The geological prospecting carried out at the end of the 19th century provided evidence of extensive potash salt deposits in the Werra district between Bad Salzungen and Gerstungen , the economic development of which began in 1894. The first Salzungen shaft was sunk in Leimbach from 1896 to 1899, but it went down because of strong carbon dioxide emissions not in operation and was finally shut down in 1901. A stock corporation for the promotion of carbon dioxide was established at the location. The Kaiseroda  I mine went into operation in 1901 as the first potash plant in the Werra district . The winding towers, spoil heaps, railway tracks and chimneys of the processing plants now shaped the region. Equipped with the latest technical achievements of their time, the Kaiseroda II and Kaiseroda III plants at Merkers and the Sachsen-Weimar plants in Unterbreizbach and Heiligenroda in Dorndorf were started up in 1923 and 1925 .

More than 100 prisoners of war as well as women and men, mainly " Eastern workers ", had to do forced labor in the potash pits of Leimbach and Kaiseroda and in the ammunition factory Erdmann-Wühle during the Second World War . A memorial stone in the Leimbach cemetery and a stele in Hermannsroda on the road to Hundskopf remember the victims of forced labor. During the war years 1943 to 1944, the archives of the Prussian State Library in Berlin were temporarily stored in the disused pits of Bad Salzungen and Kaiseroda.

After the Second World War , potash production in the Thuringian potash works was nationalized. The VEB Kalikombinat Werra was created . During the GDR era, the underground mining field extended over a total area of ​​63 km². After 1990 the potash pits near Leimbach came to an end. The carbon dioxide plant was also shut down and most of the structural remains were removed.

Today there is an industrial area on the eastern edge of the village. At the boundary of Bad Salzungen, the Bad Salzunger Gewerbepark West extends into the Leimbacher district.

The heavily trafficked federal highway 62 runs through the localities of Leimbach and Kaiseroda in the section Vacha- Bad Salzungen. For more than twenty years the committees debated a required bypass road and a solution for through traffic in the local area, and plans were developed and rejected. Since the spring of 2011, these fruitless planning games have been denounced by citizen protests.

In 1841 a state treaty between the states of Saxe-Weimar-Eisenach , Saxe-Coburg and Gotha as well as Saxe-Meiningen for the construction of a railway line from Eisenach to Coburg was concluded and construction plans for the routing of the so-called Werra Railway were examined. The route was realized with a necessary Werra bridge at Leimbach in 1858. In 1879 a branch line from Bad Salzungen towards Dermbach was inaugurated - the Feldabahn , where Leimbach had its first train station at the Hämbacher Kreuz .

The initially narrow-gauge line was converted to standard gauge in 1906 between Bad Salzungen and Dorndorf and extended to Vacha . The connecting line of the Werra potash works branched off at the new Leimbach-Kaiseroda station. Today the connecting line begins with track changes in Bad Salzungen train station , Leimbach-Kaiseroda is only passed through. The signal box in the station building is still manned due to a call barrier at the station.

The place is opened up by the transport company Wartburgmobil and its partners with various bus lines and connected with the neighboring communities. 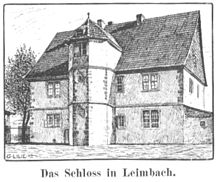 Leimbach Castle is a small Renaissance castle that was built by the Lords of Buttlar in the 17th century. The inn built on the Hundskopf is a popular restaurant in the Werra Valley. On the way to this inn lies the blue pond , this is a geological outcrop of the Rhön volcanism . The basalt extracted here using the opencast method was used for road construction. A strange crater lake remained.

A water treading area in the village water (or Leimbach) was inaugurated in June 2017 near the building of the municipal administration, it is used for health prophylaxis according to Sebastian Kneipp .