The title of this article is ambiguous. Further meanings are listed under Krauthausen (disambiguation) .

Krauthausen is a municipality of the administrative community Hainich-Werratal in the Thuringian Wartburg district .

The community of Krauthausen is located about three kilometers northwest of the city of Eisenach in the Werra valley . The core town of Krauthausen has a district size of 682 hectares. 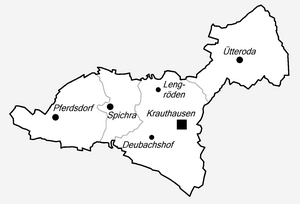 The districts belong to the municipality of Krauthausen

as well as the former manors Deubachshof and Lengröden . The union of Pferdsdorf and Spichra to form the community of Pferdsdorf-Spichra took place as early as the GDR era . 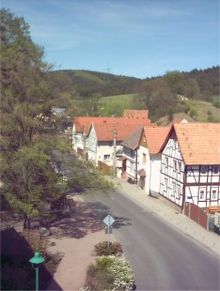 Krauthausen was first mentioned in a document in 1250.

The village of Krauthausen and the current districts of Pferdsdorf, Spichra and Ütteroda belonged to the Creuzburg office at that time . From the middle of the 14th century, Krauthausen came into the possession of the von Nesselröden family (later: von Nesselrodt), an old Hessian-Thuringian knight family . In 1461 the family acquired the neighboring Lengröden estate. With Colonel Wilhelm Friedrich Leberecht von Nesselrodt , the family died out in the male line in 1799. Members of the von Nesselröden family can be proven to have been castle men of the Creuzburg for centuries , they also provided council members in Eisenach . The coat of arms of those of Nesselröden was a five-leaf nettle with roots.

In 1709, major additions or renovations to the Krauthäuser Church were completed, as the inscription above the portal shows. However, the tower is much older and could have been part of an earlier moated castle. On and in the church are three grave slabs belonging to the von Nesselrodt family.

Around 1716 the castle (architecturally more like a mansion) was built by Johann Ernst Wilhelm von Nesselrodt . After the family v. Nesselrodt, the Krauthäuser Gut passed through different hands, such as the von Riedesel or Weichberger families . The painter Eduard Weichberger was born here on March 5, 1843 . In 1872 the manor came into the possession of the Eichel-Streiber family , who bought the two largest farms in the town and combined them with the Madelunger Gut.

Before Krauthausen, German soldiers, mostly officer students, tried on April 2, 1945 to stop the advance of the US Army and were killed by the immediate use of their tank cannons. Nine of them were buried in the Krauthausen cemetery, six in the Ütteroda cemetery .

In 1946, Krauthausen Castle was demolished on the basis of Order No. 209 of the Soviet Military Administration in Germany and its stones a. a. used for newly built residential buildings. In its place is now the village community center built in 1995.

A well-known structure is the Werra Valley Bridge near Pferdsdorf and Hörschel . The slender, up to 85 m high pillars support the 732 m long section of the roadway, which largely runs over the Pferdsdorfer Flur.

The Spichra hydropower plant is located 1500 m north of the bridge . The technical monument, built in 1925, was taken over by E.ON -Thüringer Energie and went back online after a general overhaul in 1998.

The village church of Krauthausen forms the center of the historical location; the associated massive tower is much older than the nave, which was built between 1709 and 1717. Inside are the two-story galleries on three sides, the pulpit from around 1800 and a simple baptismal font. The wooden vaulted ceiling is another decoration of the nave.

The village church of Pferdsdorf was built in 1766 on the square and from wall remnants of a pre-Reformation chapel and is a simple baroque building. The east portal of the walled churchyard, vaulted with a stone arch, only indistinctly shows the year 1560 in the apex.

The Trinity Church is located in the center of Spichra . In its current form, the church was built in 1753 after renovations from a chapel built in 1626. Inside there is a font dating from the 17th century with the family coat of arms of the patron saints of Buttlar and von Herda . There is a sundial on the south facade. The Spichra church was badly damaged in the fighting on April 1, 1945 and could only be fully used by the parish again since 1958.

The village church of Ütteroda , located on the northern edge of the district, was built between 1569 and 1572. The small church, built from bright yellow sandstone blocks, has an octagonal slated roof turret on the west side. The masonry, which is now exposed to stone, was originally plastered and probably also whitewashed. The interior is illuminated by a few and relatively small windows.

In 2010 a pond was built in Krauthäuser Rieth as a recreation and leisure area.

The Lengröden manor on the road to Creuzburg was originally a representative four-wing courtyard, surrounded by other farm buildings and a mill. On the main house you can still see the coat of arms of the last noble owners. The listed building complex is apparently in a poor structural condition due to decades of neglect. The old trees to the east of the main building are reminiscent of the park located here. About 500 m east of the estate, on the edge of the Lengröder wood above the Molkengraben, was the Buttlar hereditary burial of the landlords, of which only sparse remains can be seen today.

The council of Krauthausen consists of 12 councilors:

The honorary mayor is Frank Moenke.

The Deubachshof business park is located southwest of Krauthausen, directly on the federal motorway 4 . It has a total area of ​​almost 60 hectares (as of 2009). The Krauthausen / Deubachshof location is also an important service and logistics center for the neighboring city of Eisenach.

The federal motorway 4 with the junction Eisenach-West and the federal highway 7 run through the municipality . Bundesstraße 19 begins at the Eisenach-West junction in the municipality . The districts of Deubachshof, Pferdsdorf and Spichra can be reached via the state road L 1017 that branches off from the B7 (until 2009: federal road 7a ). Krauthausen is connected to the neighboring towns by line 174 of the Wartburgmobil transport company .

There is a railway connection at Eisenach station . The district of Pferdsdorf had a breakpoint on the Schwebda – Wartha railway line until the 1960s .

Districts of the community of Krauthausen