The title of this article is ambiguous. Further meanings are listed under Treffurt (disambiguation) .

Treffurt is a town in the Wartburg district in Thuringia . It is located in the Werra valley in the far west of the state, right on the border with Hesse . Treffurt is known for its historic old town with many restored half-timbered buildings, including the town hall , one of the most important half-timbered buildings in Thuringia. The city is dominated by Normannstein Castle , which is its landmark that can be seen from afar. The late Romanesque town church of St. Bonifatius is also of importance .

Treffurt is located in the northwestern Wartburg district, right on the border with Hesse. The Werra flows through the city, through which three fords once led, from which the name Treffurt is derived. Treffurt is mostly north of the Werra, with the old town stretching up the slope to immediately below Normannstein Castle. From the barrage at Falken ( river kilometer 0.78) the Werra is classified as another federal inland waterway .

The surroundings of Treffurt are shaped like a low mountain range with the Werra valley at a height of almost 200 meters. The landscape is also determined by striking mountains, including: Adolfsburg , Breitenberg (with Iberg) , Töpferberg , Sülzenberg , Sandberg , Kahn and Lindenberg , some of which reach over 400 meters in altitude. They are even surpassed by the 503 meter high Heldrastein with the tower of the unit southwest of the city center.

The predominant type of rock is shell limestone , which the landscape-defining Werra Valley has carved itself deeply into. The Eichsfeld begins north of Treffurt, the Hainich extends to the east , the Schlierbachswald to the west and the Ringgau to the south . In the surrounding area, forests and open spaces alternate, with the wide valley areas being suitable for agriculture and the forest dominating the heights. The closest larger towns in the Werra Valley are Mihla and Creuzburg upstream and Wanfried and Eschwege in Hesse downstream .

Treffurt in the Werra valley. 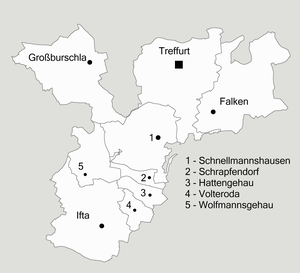 The town of Treffurt includes the larger villages of Falken , Großburschla and Schnellmannshausen as well as the settlements of Hattengehau , Schrapfendorf and Volteroda, which only have a few houses . All places were incorporated in 1994. In the course of the Thuringia regional reform in 2018 and 2019 , Ifta was incorporated into the city of Treffurt on January 1, 2019.

In 1964, Treffurt lost the Kleintöpfer district, isolated north of the city, with the Karnberg suburb . It was abandoned in 1964 as a small settlement near the border and demolished and its corridor with the Treffurt city forest was moved to Wendehausen shortly afterwards.

In 768 Charlemagne commissioned the construction of the Homburg monastery near Bad Langensalza . He appointed the gentlemen "von Driefurt" as bailiffs over the monastery. Treffurt was first mentioned in 1104 on a document from Archbishop Ruthard of Mainz . It describes that the bishop consecrates an altar in the "cell" at Falken, whereby a "Pilgrim de Trifurte" is mentioned as a witness. Friedrich von Treffurt was hired as an advisor to Heinrich Raspe IV .

Due to its location at the crossroads of two trade routes, Treffurt gained regional importance in the Middle Ages. To protect the fords, the construction of Normannstein Castle began in the 11th century . In the following period, Treffurt quickly developed into an important regional trading center. This was taken into account in 1333 by granting city rights. In 1532, Emperor Charles V gave Treffurt the right to "hold a weekly market every Saturday and two annual markets on St. Georgi and St. Simon".

Locking the looked German division of the city, as they are now right at the Inner German border lay. After German reunification in 1990, however, rapid growth set in, companies settled in the city again and tourism began.

The city council of Treffurt consists of 20 council members:

The full-time mayor Michael Reinz (independent) was elected on May 8, 2011.

The city of Treffurt has a coat of arms and a hoisted flag .

Description of the flag: "The flag of the city of Treffurt shows the coat of arms on a white and red divided cloth to the leech."

There is also a partnership with Nüdlingen , located in Bavaria .

Treffurt is known as a " half-timbered town " and represents a mixture of Thuringian and Hessian cultural influences. The most important sights are the town hall , a large half-timbered building from the Renaissance period from 1549 with a high tower and Normannstein Castle from around 1200 above the city .

Also worth seeing are the late Romanesque town church of St. Bonifatius from the 13th century, the partially preserved town wall from the 14th century, the neo-Gothic Catholic church of St. Mary (built 1863–1867), as well as some special, mostly lavishly restored half-timbered buildings such as the " Ear Slap House " from 1608, the Trottsche Hof, the Saxon, the Hessian and the Mainzer Hof , which served to administer the city during the phase of the inheritance, the Falkenstein prison and the half-timbered house in Kirchstrasse 31 , Treffurt's oldest residential building from 1546.

The Normannstein spring is located on the outskirts and is enclosed in a monument. The former Treffurt train station and its former water tower are also listed buildings.

The city is developed for tourism through the German Half-timbered Road , the Werra Valley Cycle Path and the Barbarossaweg .

The Treffurt shooting club has its origins in 1516, making it one of the oldest shooting clubs in Germany. The Treffurter Carneval Association, founded in 1952, organizes an annual carnival parade on the Sunday before Shrove Monday .

The following example in Treffurt dialect was noted around 1800:

An important branch of industry in Treffurt is tourism, but there are also several companies such as Hetek Hebetechnik GmbH with 70 employees. During the GDR era, the cigar brand Sprachlos was produced in Treffurt . After the GDR , the Treffurt cigar factory was taken over by the Dannemann Group . The best-known company is Carl Warrlich GmbH, which manufactures coal lighters and grill lighters under the brand name FLAMMAT.

The Ziddelrasen industrial park is located on the western outskirts of Treffurt opposite the former train station. It has a total area of ​​1.2 ha (as of 2009). A second commercial area is located on the other side of the Werra at Schützenplatz .

The former Treffurt train station ; the track side is now built with a shopping market

Treffurt is on the federal highway 250 , which connects Eisenach in the southeast with Eschwege in the northwest. Country roads also lead to Nazza am Hainich and Wendehausen . The district of Ifta is on federal road 7 .

Treffurt and its districts are connected to the surrounding communities by various bus routes. There are bus connections to Eisenach, Eschwege and Mühlhausen / Thuringia , among others .

The Schwebda – Wartha railway, which went into operation in 1902 , connected Treffurt with Wanfried and Eschwege in the west and, from 1907, with Creuzburg and Eisenach in the south. In 1911, the Mühlhausen – Treffurt railway was opened , connecting the city with Heyerode and Mühlhausen in the east. Because of the demolition of the Werra bridges at the end of the Second World War and the subsequent demarcation, rail traffic to and from Treffurt was only possible from the direction of Mühlhausen from 1945 onwards. In 1952, the railway was completely stopped because the line west of Treffurt ran a piece over West German territory.

The Treffurt state regular school, a primary school and a branch of the Wartburgkreis adult education center are located in Treffurt.