Secret advice is a redirect to this article. See also Privy Council (disambiguation) .

In the territories of the Holy Roman Empire and the later German monarchies, the Secret Council was a college of councils ( Secret Council College, Secret Council , Secret Cabinet, in Brandenburg : Privy Council of State), which was directly subordinate to the prince and mostly under his chairmanship over the most important State affairs, in particular on the issue of ordinances , passed resolutions. In free imperial cities , the so-called “Little Council” was the so-called “Small Council”. This was for the entire financial and foreign policy of these city-statesresponsible. The forerunner up to the beginning of the 17th century was the Austrian councilor .

In the Privy Council still were initially sized elements represented, but soon outweighed the pure bureaucracy . The various branches of the sovereign administration found in him a contact point and often also a lever to enforce their own interests and intentions or at least to bring them into the ruler's field of vision. The secret council, on the other hand, enabled the entire administration to be organized according to plan. It was thus the most important tool for strengthening the co-government of the country and for expanding and implementing sovereign (public) authority.

In Prussia the members of the Secret Civil Cabinet were called Real Secret Council since the middle of the 17th century , in contrast to the members of the Justice and Domain Committee, who only had the simple title. Later, the title of Real Privy Council was bestowed on top officials as an honor. The title was associated with the predicate excellence .

Expansion of the meaning of the title

The meaning of the title is derived from an earlier connotation of the word "secret", which could also mean something like "familiar". The privy councilor was consequently the trusted - the trusted - advisor of his master.

Later, the Privy Council was the title of the highest officials , namely the ministerial directors , the lecturing councils in the ministries, the first councilors in the colleges, and so on. As a rule, the title was then combined with an addition, from which the department emerged in which the council concerned was employed, for example Privy Councilor, Privy Finance Council, Privy Councilor of Justice and so on. Even as a mere title, without an official function connected with it, the title of Privy Council was awarded for distinction, in particular the Secret Medical Council to doctors, the Secret Commerce Council (or Secret Commission Council ) to outstanding merchants and industrialists, and the Secret Economics Council to deserving farmers and so on. Even the subordinate officials , such as chancellery or accountants, were given the title of Privy Councilor in Prussia after a long period of service. 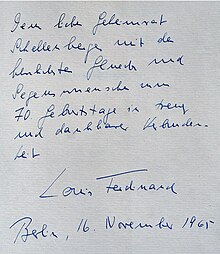 1965: Salutation “To the dear Privy Councilor Schellenberger” ; Congratulations from Louis Ferdinand of Prussia

The development in Germany initially followed a similar path as in France, where the Conseil du Roi served as the exercise of royal authority as early as the 15th century. However, through the establishment of responsible ministries and the constitutional system in general, the constitutional position of the Privy Council was drastically changed.

With the development of constitutionalism and the participation of the representatives of the people in the legislative process , the Secret Council lost its importance, but some such bodies remained for some time as an advisory body for important questions of legislation in some constitutions , such as the State Council in Prussia . There was also a Council of State in Bavaria and, since 1879, in Alsace-Lorraine . In Württemberg there was a secret council from 1816 to 1911 .

After 1918, the title was still awarded as an award in Germany by the Free State of Bavaria (evidenced, among other things, by the titles awarded to Paul Wolters and August Brehm ). The last Privy Councilor appointed by the Royal Bavarian Government was the surgeon Ferdinand Sauerbruch in 1918 .

The House of Hohenzollern continued to use the title in a non-public setting until after the Second World War. For example, in 1965 , Louis Ferdinand von Prussia congratulated Kurt Oswald Reinhold Schellenberger (1895–1977) personally on his 70th birthday with the words: "To the dear Privy Councilor Schellenberger (..)" .

After the end of the Holy Roman Empire of the German Nation , the “Geheime-Raths title” was also held in the Austrian Empire and then in the Austro-Hungarian Monarchy until it was abolished in 1918. The title of excellence was still associated with the title . The Privy Councilors were at the head of the imperial court and were also listed in the “court calendar” ( state manual ). The award of the Grand Cross of the Order of St. Stephen , the Order of Leopold and the Order of the Iron Crown also earned the title of Privy Councilor. With the creation of the republic, the use of this title was prohibited and made punishable by the Nobility Repeal Act (1919).

Therefore, today privy councilor is not, as is sometimes wrongly assumed, an Austrian official title. In contrast, the title of “ Hofrat ” is still used as a rank or award (“ professional title ”) (although there has been no “court” since the proclamation of the republic). In the republic, only officials of the second highest service class (which corresponds to the rank of brigadier or major general of the Austrian Armed Forces ) were entitled to the title of "Real Councilor" in order to distinguish the official title "Councilor" from the professional title of the same name (without the addition "Real") to be able to. The addition was abolished at the federal level in a reform of the official title system; in some cases it still exists among state officials.

For the Secret Council in England and Great Britain, see Privy Council .