This article deals with the military grade brigadier . For the GMC Brigadier car model see Chevrolet Bruin , for the head of a labor brigade see Socialist Brigade . 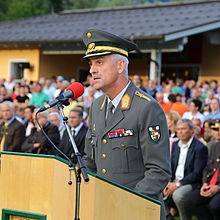 Brigadier Walter Gitschthaler speaking at the commemoration of the 100th anniversary of the beginning of the war in Dellach in July 2014.

The brigadier (short: Brig or Bgdr ; English brigadier ) is a senior officer in the armed forces or other organizations similar to the military, such as the police . In the military hierarchy according to the NATO rank code, it is usually classified as OF-6 . He is the lowest general rank as a one-star general in most armed forces; in this case, the term Brigadier General also exists as a synonym .

In some exceptions (see below), however, he is not a general rank, but a rank for staff officers one rank above the colonel .

In France there are also two exceptions: In formerly mounted units of the army, the corporal (NATO rank code OR-3 ) is referred to as brigadier and in the Police nationale there is the rank Brigadier de police (roughly OR-8 ) for officials of the Middle service . Similarly, in the Dutch police, the rank of brigadier corresponds to the German police chief (grade A8).

In France, brigadier or brigadier-chief refers to the two highest ranks ( corporals ) of so-called mounted units of the army. In the Police nationale, the Brigadier de police corresponds to the adjudant of the paramilitary organized Gendarmerie nationale , a higher non-commissioned officer (such as a sergeant major or police chief ).

In the Ancien Régime , brigadier was understood to mean the lowest rank of non-commissioned officer in the cavalry . A senior officer and commander of a brigade, on the other hand, was the Brigadier des armées du roi between 1657 and 1788 , he ranked above the Colonel and below the Maréchal de camp and was thus the second highest military rank in the army.

In the British Army and the Royal Marines as well as the Australian Army , New Zealand Army , Pakistan Army and some other armies, Brigadier designates the highest non-general rank, directly above the Colonel and below the Major General .

This rank was introduced in the British Army in 1928 and replaced the previously used rank of Colonel-Commandant (German about "Oberstkommandeur"), which in 1922 had replaced the rank of Brigadier General. In these armies too, brigadiers usually command brigades . Before 1922, the term brigadier was often used for the commanders of a brigade, which meant the brigadier-general.

The brigadier is the most senior staff officer here and is therefore something of a senior colonel, similar to the Commodore of the Royal Navy . Until shortly after the Second World War it was only a usage name for colonels and not an actual rank.

In many Arabic-speaking countries, the brigadier is called Amid .

A colonel who commands a brigade is promoted to brigadier in the Austrian armed forces after three years.

Where does it say that there are only usage names?

In addition, the usage designation Brigadier is also used for senior officials (E1) of the executive in Austria; this includes the federal police and the judiciary . Since these guards are civil bodies that are only organized according to the military model, they are not "police officers", but only use officer ranks as a designation.

The brigadier (Br; brigadier, brigadiere) was the highest military rank in the Swiss Army that militia officers could achieve until the XXI Army Reform .

Since the reform, brigades have formed the largest unit in the Swiss Army. They are each commanded by a brigadier . In the infantry brigades, around 8,700 soldiers are subordinate to the brigadier, in the tank brigades there are around 10,000 members of the army. Some brigadiers exercise their duties in militia functions. In dealings with other countries, a brigadier is referred to as a Brigadier General (Brig Gen). NATO rank code : OF-6.

Until 1977 the degree was referred to as a Colonel Brigadier . Until 1969 there was also the degree of brigadier without command for uniformed chief officers . He was marked by gray instead of black shoulder pieces and wore a uniform cap with a laurel wreath on a gray background. In the Swiss Army, the rank badge shows a star bordered with golden laurel leaves on the armpit loop and a simple laurel wreath on the uniform cap.