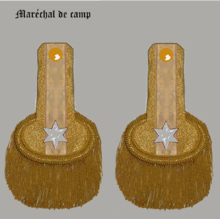 Epaulettes of a maréchal de camp of the cavalry 1786. (Regiment with gold buttons - for regiments with silver buttons the epaulettes were silver-colored with a gold star.)

Maréchal de camp (plural: Maréchaux de camp ) was a 15th century rank in the French Army of the Ancien Régime , during the Restoration and the July Monarchy . He was two steps above the Colonel and one step above the Brigadier des armes du roi . With the end of the monarchy it was first abolished and then replaced by Napoleon Bonaparte with the Général de brigade . After the end of the First Empire , it was reintroduced and then lasted until the Second Republic in 1848, when it again and this time finally became the "Géneral de brigade" .

The original task of the "Maréchal de camp" was primarily to take care of the accommodation of the troops on the campaigns, as well as to keep the various troops in the intended paths when deploying to a battle. to maintain order on the approach routes and the battlefield. In the course of time, however, this changed more and more into a troop command until he finally lost the position of "Marshal of the (battle) field" and took over the function of commander of a troop contingent within the army.

It was the highest regular "rank" in the royal army, since the military-sounding terms such as: "Lieutenant-général" , Capitaine général , Colonel général or Maréchal de France are honorary posts or posts, but not a military rank acted.

In the German-speaking area, the rank of sergeant-general was temporarily equated with the maréchal de camp .

In Habsburg Spain , the comparable rank of maestre de campo , which is also derived from the late medieval royal marshal , arose roughly at the same time as the French maréchal de camp . In contrast, the marshal titles such as Mariscal de Campo (Spain) or Marechal de Campo ( Portugal ), as well as the German field marshal or general field marshal , which were adapted by various countries in the 19th century, are not associated with the early modern rank of maréchal de camp , but were throughout Takeover or further development of the honorary title of Maréchal de France, which became fashionable in Napoleonic times .