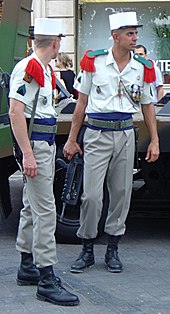 A kepi ( French képi ) is a military headgear , in the narrower sense a light, low shako , as it is worn with the uniform of the French army and gendarmerie .

In the Swiss Army , the kepi was worn from the level of higher NCOs until 1991 (for officers with a degree badge). Currently it is only given to senior staff officers (from brigadier level ).

In Germany - among other things in the Air Force - the so-called Schiffchen is also sometimes referred to by the nickname "Käppi". 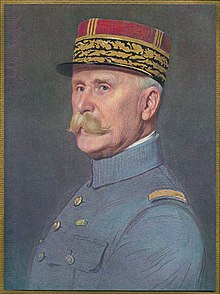 Philippe Pétain with a special kepi

The kepi was the most common headgear in the French armed forces until the end of the 20th century . The kepi emerged in the 1830s when, as part of the colonization of Africa, a light headgear was sought for the hot regions. At first, various headgear, the casquettes d'Afrique ( French : African headgear), were issued until the kepi emerged as bonnet de police à visière (police hat with visor) in 1852 .

Since the Crimean War , the kepi, which was already worn by some French units, has also become known abroad.

Police officers of the National Gendarmerie with Képi

By 1900, headgear had finally been introduced to most units in the army. The gold or silver braid on the officers' hats was also introduced, as were the different colors of the armies that are still used today .

At the beginning of the First World War , most soldiers wore the kepi. For camouflage, the kepi was worn with a gray cover, similar to the German spiked hat. It was not until 1915 that the Adrian helmet prevailed and the kepi was only worn by officers during the stage.

After the Second World War , the kepi continued to be worn as a service uniform and no longer as a combat uniform. Nevertheless, it was not often seen in public anymore, as the beret was usually worn.

After the Gulf War in 1991 and the end of conscription in France, there was an extensive renaissance of the Képi. Team ranks also wore the kepi again in public. Today it is only worn with the dress uniform or with the parade uniform , while today the béret ( beret ) is usually worn with the service suit . The exception here is the national gendarmerie , who also wear the kepi with their normal service uniform.

The National Police abolished the Képi as part of a reform, as it is too high for use in vehicles.

In the Swiss Army, the cap was previously used by all senior NCOs and officers, but since 1991 it has only been worn by senior staff officers with their original uniform. The degree badges are as follows: