The period of colonialism began for France with the acquisition of the first colonies in the middle of the 16th century. In the 19th century France became the second largest colonial power in the world. After 1945 the French colonial empire quickly fell apart. The dissolution process accelerated in the 1950s. In the “African Year” 1960 alone , 14 French colonies became independent.

At the beginning of the 17th century, America in particular was the main objective of colonization for France . In North America , it claimed the eastern half of what is now Canada , the entire central area of ​​what is now the United States and some Caribbean islands , as well as part of India . The Peace of Paris at the end of the Seven Years' War forced France to cede most of its American and Indian possessions to Great Britain ; West Louisiana had previously given it to the allied Spain so as not to let it fall into British hands.

Therefore, the history of the French colonies is divided into a first colonial empire marked in green on the map , which was lost except for a few coastal stations in Senegal in 1763, and a second colonial empire , dark blue on the map , which began in 1830 with the occupation of Algiers . Between the two phases lies the time of the British-French colonial conflict with French rule over Egypt (1798–1801) and the restoration of French rule in Louisiana (1800–1803), which is not shown on the map . At the time of the Napoleonic Empire , however, other colonies briefly came to France until 1812 (see map from 1812).

From 1830 France concentrated on Africa , starting on the opposite coast of the Maghreb , and between 1845 and 1897 conquered the entire Sahara , most of West and Central Africa . Since a large part of the population in the conquered territories were Muslims, France endeavored from the 1890s to become a puissance musulmane , that is, an imperial power that had its Muslim subjects under control.

In 1898 a French force met the British near Faschoda on the Nile , but did not get involved in a conflict and withdrew. Since the Second Empire , French colonialism spread to Southeast Asia ; Indochina was considered a gem of the colonial empire. There were also smaller possessions in India and China .

In addition, France ruled large parts of the island world of the Indian Ocean and Oceania . In 1954 the end of the French colonial empire came in Asia, and in 1960 also in Africa. Many of the former French colonies are still today considered developing countries . In some of these countries, France still financed up to 50 percent of national budgets at the end of the 20th century.

The areas highlighted in yellow in the list are still part of France or linked to France. Today France owes to these remaining areas or their territorial waters the second largest sea area in the world (after the USA) (11 million km²). An overview map of the remaining areas can be found here: French overseas territories 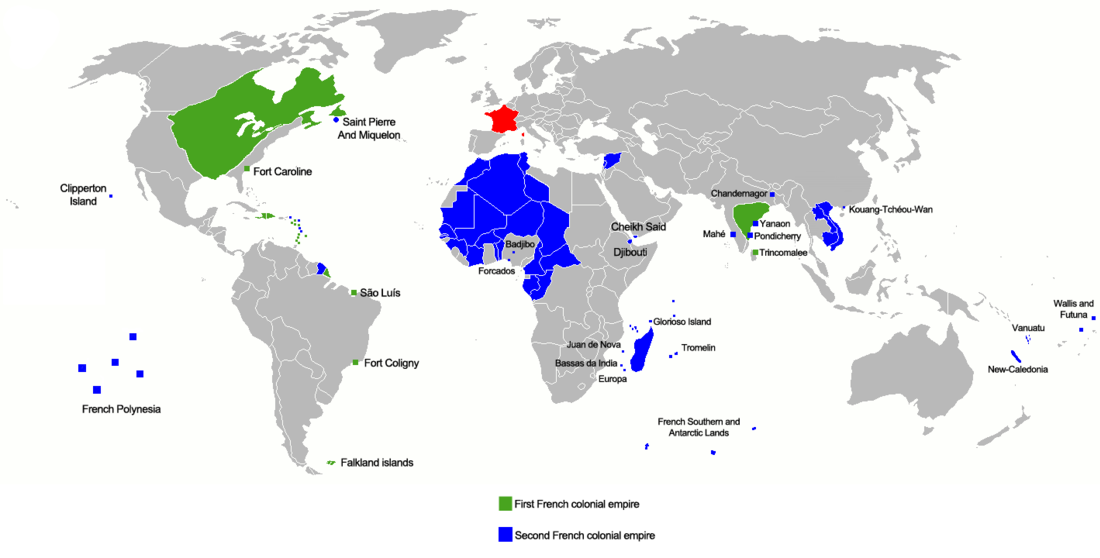 Here, areas in Europe are described that were temporarily under French rule or administration, but these are not to be equated with the overseas colonies and possessions, as they had a fundamentally different legal status.