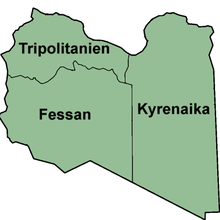 The three historical provinces of Libya, with the Fezzan in the southwest (1952–1963)

Sunset over the dunes of Wan Caza in Fezzan

The Fessan (from tamazight ⴼⴻⵣⵣⴰⵏ Fezzan , Arabic فزان, DMG Fizzān ) is a landscape in Libya that belongs to the Sahara . It is one of the three historical great regions of Libya and former governorates, alongside Tripolitania in the north and Cyrenaica in the east.

The Fessan is 551,170 km² (according to other information 684,280 km²), with a population of 413,005 inhabitants (as of 2003). It is bordered by Algeria to the west, Niger and Chad to the south . The most important places are Murzuk and Sabha . The latter is the administrative center for the Fessan and has replaced Murzuk in this role. Other important places are Ghadames and Ghat .

The country is essentially covered by desert sand, gravel and rock . The largest part is taken by two basins covered with dune fields around Ubari and Mursuk . However, there are inhabited oases . The Libyan government is trying to develop the region by expanding the infrastructure and installing irrigation systems. The danger of salinisation of the soil is great.

Six of the 32 municipalities in Libya were located on the territory of the former Great Province of Fessan until 2007:

According to other sources, Ghadames (No. 18 on the map) is still part of the Fezzan.

The landscape has been inhabited by Berber peoples since ancient times. With the 5th century BC The Garamanten became known to the Greeks . Although the Romans did not conquer the Fessan, they undertook expeditions to the Sahara and reached the areas on Lake Chad under Maternus around 100 AD .

With the advance of Islam and the introduction of the camel , there was an upswing in the Trans-Saharan trade , with Murzuk establishing itself as an important trading center in Fessan. After the immigration of the Arab Banu Sulaym, the Arab population groups were mixed with the Berbers.

After Fessan was temporarily under the rule of Kanem-Bornu in the 13th century , the country came under the loose supremacy of the Ottomans and the Qaramanli in the 16th century . In 1914 the Italians who landed in Libya in 1911 were driven out by the Senussi with Turkish support. When Italy conquered Libya in 1923, it also subjugated the Fezzan tribes in 1930. Since 1943 Fessan (French: Fezzan ) was occupied by France and in 1946 placed under military administration together with the province of Ghadames . 1948–1951 the French military administrations of the two regions were separated again. Since 1951 Fessan - together with Tripolitania and Cyrenaica - forms the independent Libya.

As a result of the civil war , the Fezzan Rage or Anger of Fezzan movement was formed in 2018 . In order to protest against the neglect of the southern Fezzan region, which is noticeable in a lack of infrastructure and frequent power cuts, it occupied the oil fields of El Heel and Sharara in December 2018. She threatened to repeat this action. The Fezzan Libya Organization , which is supported by the United Nations Development Program and the USIP , was formed in 2012 to establish local government structures and to establish contacts with the rest of Libya .