The title of this article is ambiguous. Further meanings are listed under Oasis (disambiguation) . 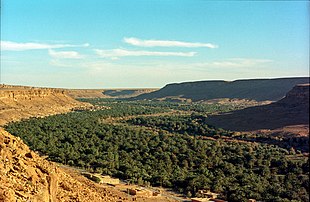 An oasis [ oˈaː.zə ] (from ancient Greek ὄασις óasis "inhabited place"; from Egyptian , ancient Egyptian wḥ3.t "boiling kettle; oasis") is a patch of vegetation in the desert , usually located at a spring , water point or wadi . Oases can vary considerably in size and character, from small ponds surrounded by date palms to entire cities with settled industrial and agricultural businesses. The traditional economy , which combines different cultures, is the oasis economy . A special form to obtain water are the qanats . Geographically, oases as settlement islands in otherwise unpopulated areas of the earth's surface are assigned to the so-called periocumene .

The river oasis is more of a "fake" oasis. An alien river flows through an otherwise dry area and thus enables the settlement of an area of ​​the desert. Probably the most famous river oasis is the valley of the Nile . It is typical that areas along the river oases have produced ancient irrigation cultures (e.g. Egyptians , Sumerians , Moche ).

The river transports water and floating debris over a great distance from areas with high levels of precipitation. As a result of floods, fertile soil settles on the bank areas. The water was used by the people for artificial irrigation.

In groundwater oases, the water is transported from the next aquifer to the surface with the help of a pump or a well. Some oases in the Sahara are groundwater oases and lie below sea level. Rainwater seeps into the Atlas Mountains, for example . It collects over a water-impermeable layer. The groundwater oasis runs for hundreds of kilometers into the Sahara. There the water can be tapped from a well.

When it rains in the mountains, the water seeps into the ground until it hits a water-bearing layer overlying a water-impermeable layer. In it it continues to flow underground until it comes back to the surface (in the desert).

Oasis with an artesian well

Yueya Quan - an oasis near Dunhuang , China, fed by an underground water vein

Artificial oases based on artesian wells are z. B. was created in southern Algeria . They serve u. a. date cultivation.

The groundwater of a mountain range in the vicinity (up to 30 km) is conveyed through underground tunnels over many kilometers to the oasis. In addition, tunnels with air shafts leading vertically upwards are also being driven into the desert in order to use the humidity that condenses in the tunnels as the hot desert air cools down. In addition, the many tunnels are very useful for repair work ( Kanat, Qanat ).

Fossil water is pumped from great depths with the help of winches (today diesel pumps).

In coastal deserts such as the Atacama, fog is common and accumulates on mountains near the coast. On the one hand this mist inhibits evaporation, on the other hand it can be used by plants by means of mist condensation.

Fields and irrigation canal in Morocco

The oasis economy is a very intensive form of economy within the oases in the arid regions . Their typical characteristic is a tripartite division by the so-called multi - storey building . Wheat , barley , millet , various types of vegetables , rice and forage crops are grown on the lowest level . Low tree crops such as figs and pomegranates dominate the second level . The third level is formed by the date palms , the fruits of which serve the residents as a source of food and also as export goods. Furthermore, oil and apricot trees grown.

The water required for the cultivated plants is brought underground in some areas, but mostly distributed in above-ground, open channels (seguias) according to a strictly defined scheme.

Oases used to be supply points for caravans as well as trading centers for the nomads and farmers who practiced a lively barter in them. Since the end of the colonial era and with the beginning of oil and gas production, the oases have lost their importance. Accordingly, there are very few traditional oases left today. The marginalization of their original population causes high workloads, irrigation techniques, emigration from the oases, the settling down of nomadic peoples, the demise of trans-Saharan caravan traffic, the loss of importance of the date due to changed consumption habits as well as climate changes and the decrease in water supplies caused by them.

However, some oases in the North African region have undergone a structural change that can be attributed to the development of deeper water reserves. This enabled an intensification and expansion of agriculture and tourism. While in the past only subsistence farming was possible in the oases due to their location and the date was the only export good, agricultural production has now been increasingly geared towards the market.

The oasis settlements themselves have also changed. Not only have they got bigger, but they have also moved more to the edge of the oasis corridor. The main reason for this is tourism, which significantly improves the economic situation of the population. Due to the change and the increasing demand for drinking water, the water reserves of the oases are severely threatened and water is increasingly becoming a scarce commodity in the oases. 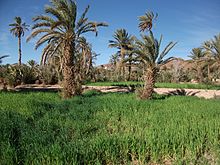 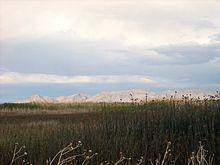 In the past, the subsistence strategies of the sedentary oasis inhabitants and the nomads ( Berbers , Tuareg ) complemented each other . The oasis inhabitants exchanged dates, grain and water for camels, sheep and goats as milk and meat suppliers. Berber carpets were also traded. The oases were vital for the nomads, because only there they could get water and supplies. In the oases, which can be reached by road, modern mass-produced goods have replaced the exchange of goods with the nomads.

Streets, hotels and sports / leisure areas were built in oases used for tourism. The number of tourists (with high comfort demands) is a heavy burden on the oases' groundwater supplies. In the worst case, this can lead to the oases drying up and consequently becoming uninhabitable.