This article deals with the genus figs ( Ficus ). Information about the fruit fig can be found under Real fig . For information on commercial and tax criminal defense lawyers, see Hanns Feigen .

The figs ( Ficus ) are the only genus of the tribe Ficeae within the plant family of the mulberry family (Moraceae). The best known species is the real fig ( Ficus carica ), the fruits of which are known as figs. The large genus ("large genus") consists of 750 to 1000 species of evergreen and deciduous trees, shrubs or climbing plants that are found in tropical and subtropical regions around the world. In frost-free areas, some species are planted for their decorative leaves or to provide shade in parks and gardens. Some species and their varieties are popular houseplants .

Illustration of a rubber tree ( Ficus elastica ): from Koehler 1887

All Ficus species are woody plants: evergreen and deciduous trees , shrubs and climbing plants . There is white milky sap in the plants .

The mostly alternate leaves are mostly simple. A stipule can be seen, which arises from two fused stipules. Only rarely are these not grown together. The stipule protects the leaf bud and falls off when the leaf is unfolded.

Seed heads of Ficus gilletii with about 1 centimeter in diameter

The flowers are always unisexual and apetal (without petals). There are monoecious ( monoecious ) and gyno- dioecious but functionally dioecious ; dioecious segregated species with hermaphrodite flowers that function as males. Many flowers are sunk into an inflorescence , a jug-shaped, hollowed-out axis tissue . Only a small distal opening (ostiolum), narrowed by scales and bracts , remains as a connection to the outside. There can be three types of flowers in an inflorescence: male and fertile female flowers and sterile female (gall flowers). The male flowers have two to six sepals and usually one to three (rarely more) stamens . The fertile female flowers have no to six sepals and a free ovary with one or two unequal styles.

The fruits are seed-like achenes , usually enclosed in the enlarged, hollow flower base or surrounded by a fleshy perianth . It is a fruit association (achene fruit association), more precisely a sykonium , hypanthodium ( false fruit ; pseudocarp), since the many female flowers develop into achenes and are integrated into the fleshy, jar-shaped flower base.

The pollination of all fig species is done by fig wasps (Agaonidae). Many fig species can only be pollinated by a very specific fig wasp species. The fig wasps penetrate the inflorescence through the distal opening, the ostiolum. They pollinate some fig blossoms and lay their eggs in others. The larvae hatch and feed on components of the fruit cluster until they develop into an imago . Afterwards, the flighty adult wasps hatch from the opening of the fruit cluster, look for a sexual partner and the cycle begins again.

Aerial roots of a fig species 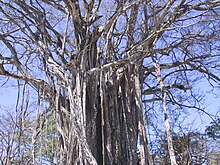 Strangler fig in the adult stage during the dry season

Some species of ficus are strangler figs. The seeds are eaten by birds and pass through the digestive tract undamaged. When they are excreted on the branch of a tree in the bird's droppings and stick there thanks to the mistletoe-like slimy seed coat, the seeds germinate on the branch. The fig plants grow right there; so it is first of all epiphytes . But their aerial roots grow down to the ground. When the roots reach the ground, the figs begin to grow faster and from now on they form many more aerial roots. They gradually enclose their support tree or host tree, which eventually dies, creating a cavity inside the strangler fig. The strangler fig also benefits from the nutrients released by the decomposition of the dead tree.

Some of the numerous types of strangler fig are:

Since most Ficus species produce very many fruits , they are an important source of food for many animal species, including bats , primates and birds, and also for fruit-eating beetles such as the great rose beetle .

The genus Ficus was established by Carl von Linné in Species Plantarum 2, 1753, p. 1059 and Genera Plantarum , 5th edition, 1754, p. 482. Lectotype species is Ficus carica L. The genus name Ficus is derived from the Latin word for the real fig , ficus , which is also related to the ancient Greek sykea . The German common name was also taken from Latin . Ficus is the only genus of the tribe Ficeae Gaudich. within the Moraceae family .

The genus Ficus contains 750 to 1000 species that thrive in tropical and subtropical regions around the world.

Habitus of Ficus abutilifolia in the habitat

Foliage leaves and fruits of the tall fig ( Ficus altissima )

Branches with fruits of the deciduous species Ficus arnottiana

A variety of Ficus aspera with variegated leaves

Habitus and leaves of Ficus auriculata 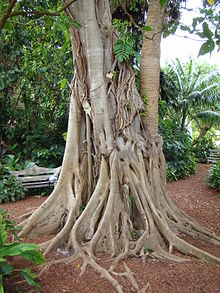 Branch with leaves and fruits of Ficus bahiensis

Branch with leaves and fruits of Ficus callosa 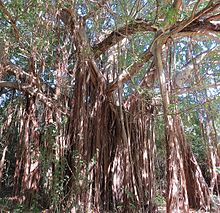 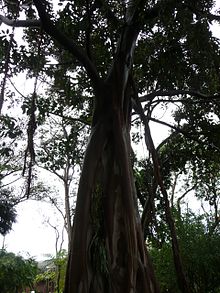 Habitus of Ficus cordata in the habitat

Branch with leaves and fruits of Ficus coronata 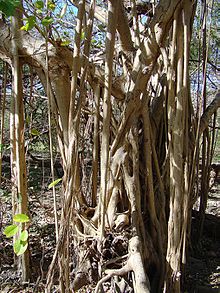 Habit of Ficus cotinifolia in the habitat 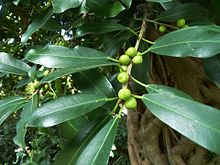 Branch with leaves and figs of Ficus craterostoma 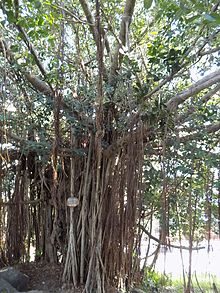 Habitus and leaves of Ficus cyathistipula

Underside of the leaf of Ficus cyclophylla

Branches with leaves and figs of Ficus erecta

Branches with figs from Ficus exasperata 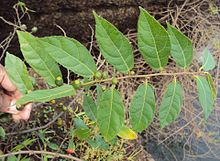 Branch with alternate, stalked leaves and figs from Ficus heterophylla

Habitus of Ficus ilicina in the habitat

Habitus of Ficus ingens in the habitat

Branches with figs from Ficus ingens

Branch with leaves and figs of Ficus nota

Trunk with bark and leaves of Ficus nymphaeifolia

Opposite leaves and figs of Ficus odorata

Branch with stalked leaves and figs of Ficus platypoda

Branch with stalked leaves and figs of Ficus pleurocarpa

Habit and leaves of Ficus pseudopalma

Habit and leaves of the climbing fig ( Ficus pumila ) 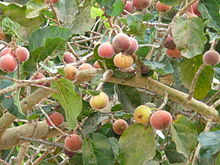 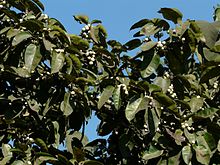 The genus of figs ( Ficus ) is divided into six sub-genera with sections, subsections and series:

The figs of some kinds are eaten. The best known is the common fig ( Ficus carica ). For example, the figs of Ficus macrophylla and Ficus palmata are also used .

Figs sold in Austria are usually dried and brown. Commercial form used to be rings to which the axially pressed fruits were threaded onto a biogenic fiber and knotted. Today, 250 g of figs are pressed into an elongated brick, wrapped in cellophane and placed in a wooden box or sturdy cardboard box. In most cases, a 4–8 mm short stalk remains on the fruit until it is eaten, which is not eaten but prevents germs from penetrating during the drying process.

Supplier countries are Turkey and Italy, 2018 are, however, already in Vienna- Simmering cultivated figs.

The medicinal properties of the common fig ( Ficus carica ) were investigated.

Ornamental plant in parks and gardens

Many species are used as ornamental plants in parks and gardens.

Some Ficus species and their varieties are used as ornamental plants in rooms (selection):

Due to their good adaptation to the climate of the living area, different species are suitable as indoor bonsai .