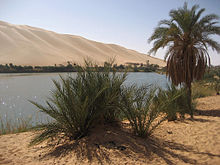 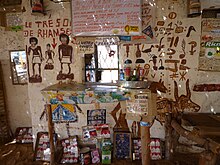 Gaberoun (Arabic: قبر عون, alternative spelling Gaberoun, Gaber Awhn, Gabr Awhn, Gabr Own, Gabraun) is an oasis in the Wadi al Hayaa district and in the Sabha district of the Fezzan region in southwest Libya .

The place is located on a large lake in the Idehan Ubari desert region of the Libyan Sahara . On the northeast bank is a rudimentary tourist camp with an open patio, sleeping huts and a souvenir shop. The lake is very salty; Swimming can be pleasant despite the saltwater crabs. Mosquitoes are abundant, especially in summer. October through May is considered the best time to visit as the climate is milder.

A small tribe of Tuareg lived in the oasis; the ruins of their settlement are scattered among the palm trees on the northwestern bank of the lake. It is said that one of their livelihoods was the worm-like crustaceans that they fished from the salty lake. They were relocated to a new location outside the sand dunes in the 1980s, in Wadi Bashir, south of the erg, a concrete dwelling settlement built specifically for the relocation of this tribe.

The old Bedouin settlement on the west bank of the lake has been abandoned and is now in ruins.

The oasis is accessible from the Sabha-Ubari Road (150 km west of Sabha and north in the sand dunes of the settlement of Qasr Larocu) by a 36 km long four-wheel drive through the dunes of the Ubari Sand Sea (also called Ramlat al Dauada).

The second mission from the game Sniper Elite III takes place on the Gaberoun oasis.