This article deals with the Algerian oasis city. For the ancient Egyptian place, see Tanis . 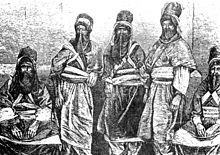 Envoy of the Sultan of Djanet in Algiers in 1863

Djanet ( Arabic جانت Dschanat , DMG Ǧānat , tamazight ⵊⴰⵏⴻⵜ) is an oasis city in southeast Algeria and the capital of the Djanet province in the Sahara .

The oasis in southern Tassili n'Ajjer was a kind of capital for the Tuareg of the Kel Ajjer Confederation until the late 19th century . The noble clan of Imanan resided in Djanet, whom European travelers referred to as the sultans of the northern Tuareg. The Imanan put their name in an etymological context with the Islamic term " Imam " and traced the origins of their gender back to the Prophet Mohammed . This line of descent is of course fictional and primarily served to justify the supremacy of the naturally weak ruling families of the Tuareg (Imenokalin). The actual weakness of the ruling dynasty is shown by the fact that its members were not allowed to leave Djanet and that the real power lay in the hands of the Uraghi dynasty. This apparent parallel between the power relations among the Tuareg and the pre-Carolingian Merovingians gave French travelers in the 19th century the idea that the Tuareg were possibly descendants of Germanic or Frankish immigrants.

During the French colonial rule the city was called Fort Charlet.

The ten-day Sebiba dance festival is held every year at the beginning of the Islamic New Year month up to Ashura Day .

The city used to be difficult to reach via slopes. The road from the nearest town Illizi to Djanet has been paved since around 2000 , which makes the journey very easy. The road leading to the Libyan oasis Ghat is now paved as far as the border town of Tin Alkoum . The border crossing to Libya is currently closed.

Djanet-Tiska Airport is 33 km south of the city and is accessible via an asphalt road .

Horticulture is operated in Djanet. In times of drought, foreign workers from neighboring Niger occasionally come in to work in the oasis gardens. In the vicinity of the place there are many rock paintings and rock engravings that are well worth seeing (very beautiful about 2/3 of the route between Illizi and Djanet on the Dider plain ). The Erg d'Admer about 20 km west of Djanet also invites you to visit with its very high dunes.