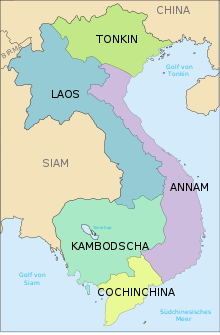 Cochinchina is shown in yellow on the French Indochina map . 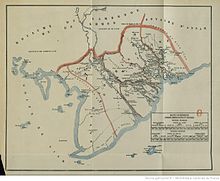 Map of Cochinchina (1861). The then kingdom of Annam borders in the north.

Cochinchina , German also Kotschinchina , French Cochinchine , Vietnamese Nam Kỳ (from Chinese南 圻, "southern border") is an old name for the south of Vietnam and parts of eastern Cambodia , between 1863 and 1954 mainly for the French colony of this name.

The term was introduced by the Portuguese Tomé Pires in 1515 as Cauchy Chyna . Pires, who was staying in Malacca at the time, took the name from Malay , where it described a country between Champa and China . The Malay term in turn came from the Chinese Jiaozhi ( Chinese  交趾 , Pinyin Jiāozhǐ , Vietnamese: Giao Chỉ), which referred to all of Vietnam including the lower reaches and delta of the Red River . China was added to distinguish the country from the Indian Cochin . However, the reverse form Chinacochim appears on Genoese maps as early as 1502/3, before the Europeans sailed the South China Sea and with it Malacca.

Later, in the 16th century, it was used to designate the separate Nguyễn state around the city of Huế , which became common European language in 1679 with the establishment of the Apostolic Vicariate of Cochinchina. From the 17th century onwards, a distinction was made between Tongking in the north and Cochinchina in the south. The southern part around Gia Định (merged with Saigon to form Ho Chi Minh City in 1979 ) and Đồng Nai was only called Lower Cochinchina in the late 18th century.

In 1862 the French annexed Cochinchina as a colonial area . The center and north became French protectorate areas under the nominal rule of the Emperor of Huế as Annam and Tongking .

After the Franco-Prussian War of 1870/71 , it was discussed whether Cochinchina should not be ceded to the German Empire as a French reparation. Reich Chancellor Bismarck rejected this. 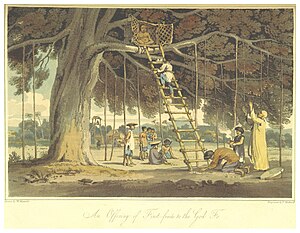 Religious ceremony of the villagers 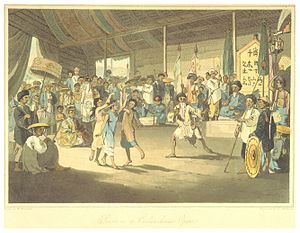 Since the end of French colonial rule over Indochina in 1954, the name Cochinchina has been used less and less and is now out of use. The current name for the southern part of Vietnam is Nam Bộ .