Compared to other nations of the Commonwealth , the fracture lines run the history of Australian land units less drastic at national events such. B. the independence or the increasing sovereignty of the country, but rather two strategic developments:

In 1947, a peacetime standing army was established according to modern needs, which undermined the importance of the Citizens Military Force . The CMF was renamed the Army Reserve in 1980 and adapted to the structures of the active force.

Despite multiple involvement in crises and conflicts around the world, Australian territory came under direct attack only during the Second World War .

The Army Aviation did not receive their own transport helicopters until 1989, before they were subordinate to the Air Force. 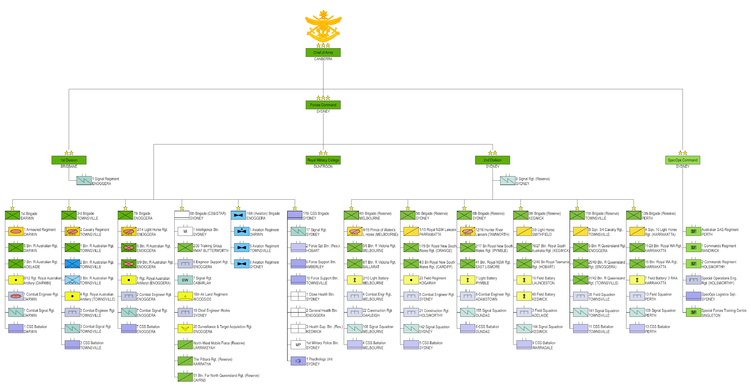 Despite Australia's historical ties to the United Kingdom of Great Britain and other Commonwealth of Nations, the Australian Army has modern equipment from many countries. Australia is currently renewing its helicopter fleet with European models ( Eurocopter Tiger and NH90 ). The Leopard 1 formed the backbone of the Australian armored force (1st Armored Regiment), but has now been replaced by the American M1A1 Abrams. The orderly weapon has been the Steyr AUG since the 1980s and replaces the FN FAL and M16 .

An Army Aviation CH-47 in Afghanistan

The Eurocopter Tigers are to be replaced from around 2020, partly because it became known in 2016 that the operational readiness of the helicopters over the entire past year 2015 was only 3.5 out of 16 helicopters. The investigating Australia National Audit Office found 76 so-called capability deficiencies , of which 60 were classified as "critical".