The armed forces of Pakistan ( Urdu پاک عسکری Paki Askeri ) are the military of Pakistan . Pakistan works closely with the People's Republic of China militarily and is in fact a nuclear power . The division of the Indian subcontinent created the states of India and the Islamic Republic of Pakistan. The accession of Kashmir to India led to the First Indo-Pakistani War (1947 to 1949) . Since then, the Kashmir conflict has been simmering in the border region , which was also the cause of the Second Indo-Pakistani War in 1965 . Border disputes also led to the Kargil War in 1999 . The Pakistani military has often been involved in coups since independence.

The Pakistani defense budget of 4.26 billion US dollars (2005) is far below that of the neighboring countries India (46.05 billion), China (81.48 billion) and Iran (18 billion). According to reports by the US newspaper New York Times in December 2007, Pakistan received military aid from the US amounting to around 5.3 billion US dollars annually for the fight against terrorism on the border with Afghanistan . Since 2001, Pakistan has received about $ 10 billion in US aid. A large part of the money is also said to have been used for the development of new weapon systems. Pakistan works closely with Chinese companies and the People's Liberation Army on armaments projects.

Further aid funds and investments in the Pakistani armaments industry are coming from Saudi Arabia . A participation of Saudi Arabia, which financed Pakistan's nuclear program "to a not inconsiderable part", is largely assured, unofficially it is spoken of 50 percent.

In order to survive in the arms race with the larger India, highly qualified and combat-experienced Pakistani military personnel were leased to rich countries such as Saudi Arabia and the UAE for decades .

Pakistan's armed forces maintain a network of foundations that make up the core of the economic-military complex ( military business = milbus ). These include the Fauji Foundation , the Shaheen Foundation , the Bahria Foundation, and the Army Welfare Trust . The foundations are not controlled by the Ministry of Defense or Parliament. They enjoy a range of tax breaks and subsidies and benefit from their proximity to politics in their economic activities. The army is one of the largest landowners, employers, and hauliers in the country. In the past, officers were given a piece of land when they left service; today this is done after promotions. It is estimated that the Army controlled 11.6 million acres of land in 2013 . In addition, the armed forces are the only state institution that can convert the land they control into the private property of their members. Since the army itself decides how the land is to be used, there are repeated conflicts and the displacement of farmers. Many officers have also sold their land to local landowners, which strengthens their common interests with the army. Because parliament has no say in the military budget, the system is highly opaque.

The Pakistani army is divided into the three classic armed forces , the army with around 550,000 men, the air force with 45,000 men, the navy and coast guard with a manpower of 24,000. Another branch of the armed forces introduced by Pervez Musharraf in 1999 is the strategic nuclear command , the National Command Authority (NCA). The number of active soldiers is 915,000. There are also 513,000 reservists and around 300,000 men in paramilitary units. The armed forces thus comprise a total of 1.43 million men. It is a pure volunteer army , there is no conscription .

One of Pakistan's three major secret services is the Military Intelligence (MI) , which is subordinate to the Pakistani military . Their main tasks are counter-espionage and monitoring potential public enemies. The Inter-Services Intelligence is largely under the control of the armed forces.

In 2004, under the administration of George W. Bush, the United States added Pakistan to its list of key allies outside NATO . This gave the country preferential access to selected American armaments programs.

Chairman of the Joint Chiefs of Staff 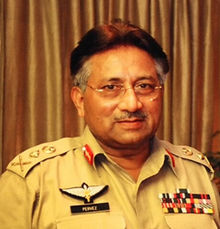 Pervez Musharraf , in fact for a long time the commander in chief of the armed forces

Since its inception in 1947, the armed forces have been deployed in a number of clashes:

The backbone of the Pakistani army: the Al-Zarrar tank

Chief of Staff of the Army

The Chief of Army Staff is the most senior officer in the army. Previous incumbents were:

On January 9, 2006, Jane's Defense Weekly reported that an advanced version of the J-10 was being planned ( Super J-10 ), with a more powerful engine, thrust vector control, greater endurance, and a phased array radar.

The India-Daily writes that there is a defense alliance between Pakistan and Saudi Arabia and that Pakistan is allowed to use the Saudis' AWACS system.

We are currently working on the JF-17 project with the People's Republic of China . Series production in Pakistan began in 2007 at the Pakistan Aeronautical Complex (PAC).

The United States intends to hand over another 36 Lockheed Martin F-16 aircraft valued at $ 500 million to the Pakistani Air Force . The US Department of Defense bears the costs for this .

In the Air Force, women also serve in arms. In 2006, four female pilots were accepted into the service of the armed forces for the first time; in 2013, 24 female paratroopers were added.

Pakistan's conventional naval forces include a destroyer , eight frigates (Tariq and Shamsher classes, formerly British Leander and Amazon classes ), nine submarines (including two of the French Agosta-90B and two of the Agosta-70 class, equipped with anti-ship missile AGM-84 Harpoon ), and nine helicopters of the types Sea King and Sea Lynx (as of 2005). The coastal defense has a force of eight other speedboats , nine landing craft and three mine boats.

The facilities of the Pakistani Navy are called Pakistan Naval Station (PNS), which means they are named with the same abbreviation as the ships ( Pakistan Naval Ship , PNS).

The tactical nuclear force was introduced by Musharraf in 1999 and reports directly to the President. Pakistan has not signed the Nuclear Non-Proliferation Treaty. It has had nuclear weapons since 1998. The arsenal is estimated at 100–120 warheads, but the Strategic Plans Division (SPD), which commands the nuclear forces, has never issued a statement.

The Pakistani armed forces emerged from the division of the armed forces of British India after the division of the former colonial empire into the two sovereign states of India and Pakistan. Of 420,000 soldiers in the British-led colonial forces, around 150,000 opted for Pakistan. Most of the colonial army's military facilities were also located in Indian territory. The recruits for the Pakistani army were usually Muslims from the Punjab , Beludjistan or Pashtuns . The armed forces were massively expanded in the course of the Kashmir War of 1947–1949 . The British administration's previous plans to demobilize half of the armed forces have therefore been abandoned. Up to 500 British officers served in Pakistan during the first years of the armed forces. From 1950 the Pakistani government began to replace these with local officers. The future President Muhammad Ayub Khan became the first local commander in chief of the Pakistani military in 1951 .

Due to the increasing militarization of the state, the army gained more and more power over the civil political establishment. 1958 Muhammad Ayub Khan was appointed by the President Iskander Mirza on October 8th as chief administrator in the framework of martial law. Ayyub Khan was named the country's only field marshal during the year . His reign as military dictator was formalized in an unopposed election in 1960 that made him president of the state. During Khan's reign, ex-military officials were promoted to numerous posts in the state bureaucracy, business and the media. In the course of these personal ties, the military assumed the role of the dominant power in the state. Prestige projects such as the construction of the new capital Islamabad were placed directly under the command of generals.

On March 5, 1959, Pakistan signed a comprehensive military aid agreement with the United States. In addition to material deliveries, the agreement also included the dispatch of military and civilian advisors. In return, the USA received the right to operate a military base for intelligence purposes against the USSR in Peshawar . Reconnaissance flights also started from Pakistani territory. The affair of the downed pilot Francis Gary Powers , who took off from Pakistan, caused political displeasure within the military and the population.

From 1973 to 1977 the army fought against around 50,000 armed rebels in Balochistan . The army and air force also occasionally destroyed settlements. Tens of thousands of people were killed in around 200 major armed conflicts. The Pakistani military was supported by the Iranian Air Force with pilots and aircraft. As a counterweight to the army, President Zulfiqar Ali Bhutto founded the Federal Security Forces, which, together with his party's militia, were supposed to provide civilian politicians with a domestic counterweight to the military leadership (see Operation Fair Play ).

During the military regime of Mohammed Zia ul-Haq , the military was able to re-establish its dominant political and social role. Military service providers and their families were given preferential treatment in land sales, medical services, employment in public offices and businesses. Zia introduced a ten percent quota for the military in public service. That is why active and retired military personnel occupy numerous management positions in public institutions such as the post office, electricity supply, aviation, telecommunications and infrastructure companies, as well as ambassadorial posts. The pay was also increased significantly, even among the lower ranks. The military itself was modernized with the help of the United States in the context of the war in Afghanistan . 1981–1987 the country received US $ 3.2 billion in military and civil aid from the United States. Zia also pushed the country's nuclear armament efforts. According to the head of the nuclear program, Abdul Kadir Khan , all means were available in 1985 to carry out a successful nuclear test. Zia himself confirmed in a 1987 public interview with Time magazine that Pakistan could manufacture a nuclear weapon at any time .

In 1998, the Pakistani armed forces detonated six nuclear weapons underground. It did so in response to five Indian tests that year. Surveys about the approval of the tests, in order to return the favor also for the first Indian test from 1974, fluctuated between around 60% and 97% approval.

Women also serve in three branches of the Pakistani military

The Pakistani military has been criticized for being a “ state within a state ” , and there have been several coups in the country's history .

In Pakistan, the armed forces not only hold political power in their hands. The top military also control large parts of the economy, they control countless companies, are one of the largest landowners and have their officers housed in the most important social institutions. Therefore, the pensions for the military are five times as high as those for civilians.

Direct corruption is also considered widespread within the military. In 2006 a lawyer presented a list of charges against various top military officials, including Musharraf, to the Lahore Supreme Court , but the court did not dare to accept the petition or call a hearing due to significant military pressure.