This article deals with an Indian prince of the 18th century. For the East African slave trader of the 19th century see Tippu tip . 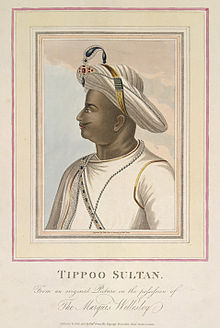 Tipu Sultan (Tipu Sahib; born November 19, 1749 or December 10, 1750 in Devanahalli , †  May 4, 1799 in Shrirangapattana ) ruled over the state of Mysore in southern India . He was a son and, since 1782, he was the successor of Hyder Ali , who had risen from general to de facto ruler after successfully defending Shrirangapattana, the capital of Mysore in southern India . In India it is still very popular today under the name "Tiger of Mysore".

Tipu Sultan was a bitter opponent of British colonial aspirations and waged three wars against the British . He had 88,000 men in the field, pulled with a superior force, also using primitive rocket weapons, against the English under General Matthews and forced them to surrender at Bednur in April 1783 . After a stubborn siege , Mangalore also fell into Tipu Sultan's hands. In the meantime the English had concluded an alliance with the Marathas , as a result of which Tipu Sultan had to submit to the Mangalore peace on March 11, 1784, since he had also been deprived of French support after the Treaty of Paris .

In 1786 he took the title Padischah and ordered the demolition of the old capital Maisur (Mysore) including the castle, and forced its inhabitants to relocate to Shrirangapattana. He set up a splendid court and tried to enlarge his army to 200,000 men. He legitimized his rule explicitly Islamic. He strove for a large Islamic federation and therefore turned to Sindh , Kabul , Balochistan and Constantinople.

Meanwhile, the British were just waiting for an opportunity to resume military operations after Tipu Sultan attacked Travancore in December 1789 . In 1790, Lord Cornwallis concluded an alliance of protection and defiance with the former allies of Tipu Sultan, the Peshwa of the Marathas and the Nizam Ali of the Deccan . Despite fierce resistance, Tipu Sultan lost territories in Maisur, so that Cornwallis and Abercromby were able to advance to the capital Shrirangapattana, within whose walls the Sultan had to surrender to the enemy superiority on March 19, 1792. He lost half of his lands, had to pay 33 million rupees , released the prisoners and those forcibly displaced, and held two of his sons hostage.

In the following period Tipu Sultan armored in secret and tried to incite other Indian powers against the British. He also sent messengers to Mauritius and letters to France to the Directory in Paris (1797), in which he offered France a friendship pact, which was gladly accepted. After France unexpectedly invaded Egypt in 1798 , the English decided to restore peace in India, as Tipu Sultan also refused to cease armaments efforts.

The British declared war on February 22, 1799 and advanced with two armies, reinforced by auxiliary troops of the Nizam, into Mysore and defeated Tipu Sultan in two battles. On March 6 at Sidasir and on March 27 at Malaveli . The Sultan then withdrew to Shrirangapattana, which was taken by storm on May 4th . Tipu Sultan was hit by several bullets and fought to the last breath.

Tipus Tiger in the Victoria and Albert Museum London

Tipu Sultan's family was sent to Vellore Fortress and received an annual pension.

Mysore, the Empire of Tipu Sultan, was divided between Great Britain and the Nizam of the Deccan for political reasons . A special curiosity is Tipus Tiger , a mechanical automaton manufactured in Mysore at the end of the 18th century . It shows a tiger attacking a European soldier or employee of the British East India Company and creates appropriate noises and movements. Tipus Tiger was brought to London after Tipu Sultan's death and is now on display in the Victoria and Albert Museum in London.

The Pakistani Navy named a frigate PNS Tipu Sultan (identification D 185) of the Amazon class after him .