from Wikipedia, the free encyclopedia
This is the spotted version , flagged on February 13, 2020 . There are 2 pending changes that have yet to be viewed.

Established the mission in 1999

This mission was on 30 November 1999 by the Resolution 1279 of the UN Security Council launched. The occasion was the second Congo War from 1998 to 2002, in which troops from the Kabila government and various rebel groups and units from several neighboring African states faced each other. Initially, 500 military observers were deployed and the mandate was later expanded on the basis of further resolutions.

On February 24, 2000 ( Resolution 1291 ) the troop strength was increased to over 5,500. The blue helmets should observe the ceasefire and facilitate the transport of aid. The basis was Chapter VII of the UN Charter . However , they did not intervene in fighting between Rwandan and Ugandan troops in Kisangani .

From 2001 onwards, the disarmament, demobilization and social reintegration of combatants was to be carried out , initially on a voluntary basis . In spring 2003, local militias carried out massacres of the civilian population in Ituri province , which MONUC was unable to prevent. Between June and September 2003, MONUC was established by Operation Artemis of EUFOR supported under French leadership. With Resolution 1493 of July 28, 2003, an arms embargo was imposed in eastern Congo and the troop strength of MONUC was increased to 10,800.

Only after the MONUC had been repeatedly shot at by rebels and a number of MONUC soldiers were killed, the force was allowed to use force through a mandate under Chapter VII of the UN Charter. In resolution 1592 of March 30, 2005, MONUC was mandated to protect the civilian population with all necessary means of military force (i.e. a so-called robust mandate ) and to take action against illegal armed groups. As a result, 12,000 militia members were disarmed in Ituri.

At the end of March 2005 the troop strength was 16,700 soldiers from 49 countries. In resolution 1635 of October 31, 2005, the mandate was extended to September 30, 2006. However, UN Secretary General Kofi Annan was unable to assert himself with the demand for 2,500 additional soldiers at the UN Security Council; instead, only 300 were approved. 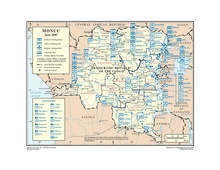 On November 20, 2012, Congolese rebels of the M23 group , opponents of the Kabila government, took control of the provincial capital of Goma with a population of one million within a few hours. Neither the government army nor UN soldiers could stop them. The rebels were led by the deserted Congolese general Bosco Ntaganda , who calls himself “Terminator” and has been wanted by the International Criminal Court for war crimes since 2008 , but has lived unmolested in Goma. The advance of the rebels in eastern Congo caused up to 450,000 people to flee; the UN Security Council demanded sanctions against their leaders. Numerous development organizations had already brought their employees from the region to Rwanda to safety, and the UN, too, withdrew employees from its peacekeeping mission.

On March 28, 2013, the UN Security Council resolved in resolution 2098 to set up a brigade with an offensive mandate, the Force Intervention Brigade (FIB), consisting of 3,069 soldiers within MONUSCO . This should be able to take active action against rebel groups in the east of the Congo - alone or with the Congolese government army FARDC . With its offensive mandate and its implementation, the Force Intervention Brigade represented a novelty within the UN peace missions.

In August 2013, the German Martin Kobler took over the management for a year and a half until April 2015.

In 2014, MONUSCO and the Army of the Congo tried to develop a plan for joint action against the FDLR. This failed because Congo's President Joseph Kabila insisted on leading the army. Many of the army commanders were under investigation by the UN for involvement in war crimes; MONUSCO is not allowed to work with them. In mid-February 2015, the Congo Army began its offensive against the FDLR on its own.

The Nigerian Maman Sambo Sidikou became the head of the mission in October 2015.

With Resolution 2348 , the United Nations Security Council extended the mission to March 31, 2018, but at the same time reduced the troop strength to 16,215 soldiers.

On November 16, 2018 in an attack by Islamist terrorists were Ugandan Allied Democratic Forces (ADF) in Beni on peacekeepers MONUSCO six are Malawian soldiers and a Tanzanian soldier killed and ten others injured.

With Resolution 2049 , the United Nations Security Council extended the mission until March 31, 2019.

The MONUC / MONUSCO is criticized, among other things, because it consists for the most part of soldiers who themselves come from countries in which there is no democracy (for example Pakistan or Nepal ) and it is difficult to understand how this is in the Congo Should bring democracy. In addition, the equipment can be compared to that of a third world army.

Pakistani soldiers allegedly engaged in illegal gold and arms trafficking with militias in Ituri, according to the BBC, and an investigation into this has been withheld for political reasons; the Pakistani government denied these allegations.

Congolese circles reported that MONUC did not protect the population, or only insufficiently, from rebels. It did not intervene in late October 2008 until thousands of civilians attacked the regional headquarters in Goma and other UN facilities with stones.

Apart from the Indian and Pakistani troops, the majority of the soldiers deployed do not have sufficient military training. Thus, Uruguay , for example, civilians for the quota who were recruited through newspaper advertisements and received two weeks of training. European soldiers are only represented at management level.

In August 2010, the UN mission was again subjected to massive criticism. The soldiers are said not to have intervened in the mass rape in Luvungi .

Roger Meece in front of the MONUSCO headquarters

The headquarters for MONUSCO was set up in Kinshasa . The Democratic Republic of the Congo was divided into six sectors, each with a headquarters.