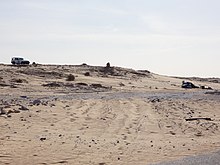 On the right a post of the Polisario Front, on the left behind a vehicle of the UN mission; in the south of Western Sahara (2017)

The Mission des Nations Unies pour l'organization d'un référendum au Sahara occidental , MINURSO for short ( English : United Nations Mission for the Referendum in Western Sahara ) is a United Nations mission and was founded in April 1991 on the recommendation of the UN Secretary General of UN Security Council established ; the mandate includes monitoring the ceasefire in Western Sahara and holding a referendum to choose between integration into the Moroccan state and independence .

The maximum strength of the observer mission is 245 authorized military personnel (as of October 8, 2017), as well as 457 civilian employees and 15 UN volunteers.

The mandate of the mission, which has been regularly renewed due to the lack of a referendum and the still unresolved status of the territory, was last extended to April 30, 2019 on October 31, 2018 with UN Security Council resolution 2440 . Until 2018, the mandates had been extended by 1 year each - this now shorter time limit can be seen as a sign of the pressure on the conflicting parties to return to direct talks after the recent escalations in the buffer zone and a stagnating status quo.

The German Wolfgang Weisbrod-Weber was appointed on June 15, 2012 by UN Secretary General Ban Ki-moon as the new Special Representative for Western Sahara and Head of MINURSO. On July 31, 2014, the Canadian Kim Bolduc , most recently the United Nations Development Program Coordinator ( UNDP ) in Panama and Deputy Special Representative at the United Nations in Haiti ( MINUSTAH ), succeeded him. She was followed on December 1, 2017 by the Canadian Colin Stewart .

The federal government has the participation of up to 16 October 2013, four officers of the Armed Forces decided and a UN request met on 16 September, 2013. The cabinet decision is valid until the end of the mission.

The Swiss Army participated in MINURSO from November 1991 to August 1994 with a Swiss Medical Unit (SMU) with a maximum of 85 members. On November 10, 1993, the Federal Council decided to extend the mandate of the SMU one last time to June 30, 1994. While the majority of the SMU returned to Switzerland at the end of June 1994, individual SMU members stayed on site until August 1994 to ensure the handover to South Korea, which was the medical successor to the SMU. Since July 2011, the mission has been supported by Switzerland with two demining specialists. In July 2014, the UN asked Switzerland to send unarmed military observers. The investigations by the DDPS have shown that the Swiss army has the military observers it is looking for. The Federal Council has therefore decided to support MINURSO with a maximum of six unarmed members of the army.