The Mirage III ([ miʁaʒ ], French for mirage ) is a single-engine fighter aircraft made by the French manufacturer Dassault Aviation . It was built in 32 variants, some of which are still in use as interceptors and multi-purpose combat aircraft to the present day .

The prototype Mirage IIIA completed its in May 1958 first flight , making the Turbojet -Triebwerk SNECMA Atar 9B with afterburner (6000 kp thrust) and the low-set delta wing the basic model as the basis of an aerodynamic platform for use as an interceptor at high altitudes.

The Mirage IIIC all-weather interceptor was the first fully operational variant that flew with the Cyrano II radar in October 1960 . The French Air Force "Armée de l'Air" procured 95 units of this type.

Cockpit of a Mirage IIIE

Further development of the Mirage IIIC, of ​​which various sub-variants were built in a total number of 523. 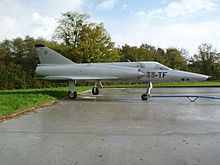 Reconnaissance aircraft in various sub-variants, technically derived from the types Mirage IIIC and IIIE. Up to five cameras could be installed in the nose. In accordance with the intended use, no radar was installed.

In the early 1960s, Australia built a licensed version of the Mirage IIIC, known as the Mirage IIIO, for its air force, which was originally intended to be powered by a Rolls-Royce-Avon engine. In the end, however, the Atar engine was used. The first flight took place on February 13, 1961. Later, the Mirage IIIOD, based on the Mirage IIID, followed.

After first attempts with the VTOL -capable (i.e. vertical take-off) prototype of the Balzac V , the more generously designed successor model Mirage III V was able to take its first flight on February 12, 1965. The machine had next to a P & W TF30 - jet engine with 8280 kp for propulsion eight smaller in the fuselage housed RB.162-31-lift engines, each with 2,450 kp for vertical take-off. At Mach 2.04, it remains the world's fastest V / STOL aircraft to this day. Due to the heavy weight of the engines, however, the payload and fuel capacity were very low. As a result, there was no series production.

In 1968 Dassault began, in cooperation with the Emmen aircraft factory (now RUAG Aviation), with the construction of a ground combat version of the Mirage III under the name Milan. The most noticeable feature of the Milan was a pair of fold-out wings on the aircraft nose, which were called "mustaches" (French mustache). The Mustaches were introduced in order to obtain better flight characteristics at takeoff as well as better flight control in slow flight and in the attack phase on ground targets. Three Mirage IIIs were converted into Milan prototypes, whereby the “mustaches” on the first aircraft could not be folded in, but could only be set at different angles on the ground. This prototype was named Asterix after the internationally known French comic figure Asterix with her big mustache and flew for the first time on September 27, 1968. A fully equipped prototype developed from a converted Mirage IIIR flew on May 24, 1969. The last machine, Milan S01 , was powered by a modified SNECMA Atar-09K-50 engine with 70.6 kN (15,900 lbf) afterburner thrust and flew for the first time on May 29, 1970. The Milan had new navigation and sensor equipment designed for ground combat, as well as a laser Target lighting device in the nose. The Milan then lost very narrowly against the A-7G . This narrow result led to such great differences of opinion in the Swiss Air Force that in the end neither of the two aircraft was procured. The Mustaches increased flight stability exceptionally well, but also had disadvantages: They obscured the view to the front and down and created turbulence in the engine inlets. The Milan concept ended in 1972; In further aerodynamic tests, the positive properties of Mustaches were achieved with canards .

The Mirage IIIS is a further development of the Mirage III due to Swiss requirements. Most of it was manufactured under license in Switzerland and passed into troop trials from 1964. In 1999 the hunting variant IIIS was retired, in 2003 the reconnaissance variant Mirage IIIRS and the last two-seater Mirage IIIDS .

With the combat value enhancement program developed by SF Emmen (today RUAG Aviation) from 1988 onwards, the following modifications were made:

It was planned to purchase 100 Mirage IIIS, but this did not materialize because of the high costs. The plan to equip some aircraft with atomic bombs developed in Switzerland was rejected; Such bombs were never built in Switzerland, and the project was stopped.

The following quantities were procured:

In the Mirage III aircraft of the French or Swiss Air Force, a fuel tank could be removed in the rear lower fuselage and a SEPR rocket motor (SEPR = Société d'Études de la Propulsion par Réaction) installed instead. This component contained a liquid fuel tank that held 300 liters of nitric acid , which, mixed with the kerosene, gave an additional thrust of 1500 kp. This auxiliary engine burned for a total of 80 seconds and could be switched on three times. The engine was used either for additional acceleration in aerial combat or to overshoot the service ceiling to up to 75,000 feet. In an emergency, the engine could be dropped in slow flight. The maintenance requirements for the engine were considerable, as highly concentrated nitric acid is extremely corrosive. Special buildings were constructed and operated in Buochs ​​and at the Payerne military airfield for maintenance and testing of the engines on the ground . The staff worked in special protective suits. Since the handling of the rocket motor and the toxic propellants were very dangerous, the SEPR drives were rarely used.

Pakistan is the only remaining operator. It had procured a total of 157 machines from different countries. All machines of the Pakistan Air Force are to be replaced by the PAIC JF-17 from 2015 .

Lebanon
10 Mirage IIIEL and 2 Mirage IIIBL. Retired in 2000 and sold to Pakistan

Guns integrated in the fuselage