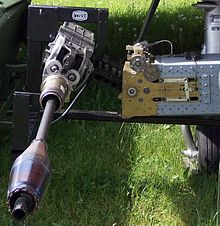 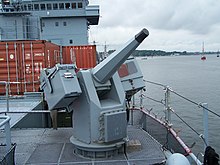 A revolver gun is a special type of machine gun . The principle involves a drum - analogous to a "classic" revolver  - with a barrel in front of it, in contrast to machine guns with multiple barrels such as the Gatling and Hotchkiss revolver cannons .

The loading-shooting-ejecting cycle, which follows one after the other with normal automatic weapons, is carried out in parallel with a revolver cannon. With such a construction, the cadence can be increased significantly.

In a normal automatic gas pressure loader - Gun the powder gases are the propellant charge of the ignition cartridges for the translatory drive of the closure in use. With a revolver cannon, the breech does not exist in this form. A control slide mounted parallel to the drum is set in motion with the powder gases, which sets the revolver drum in rotation in the return and forward movement via coulisse. The rotational movement takes place incrementally, that is, in no uniform, continuous rotation, but in cycles from chamber to chamber. After the shot has been fired, the drum rotates one chamber further and the next shot can be fired. The empty cartridge case is ejected in the fired chamber. At the same time, the drum is reloaded, which can be done in three cycles. This temporal and spatial separation of the individual steps of the loading process enables higher rates of fire than with conventional designs, in which the complete ejection-reloading process must take place between two shots.

Compared to the Gatling cannon 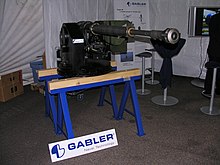