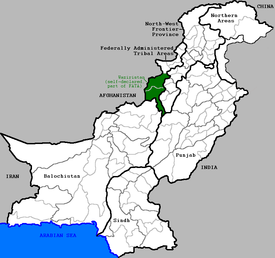 Wasiristan (in English transcription Waziristan ; Pashto وزیرستان) is a mountain region in northwestern Pakistan on the border with Afghanistan with an area of ​​about 11,585 km².

Waziristan comprises the area west and southwest of Peshawar between the Tochi rivers in the north and Gomal in the south and was part of the Pakistani Federally Administered Tribal Areas (FATA) until 2018 ; Since then, Wasiristan belongs to the province of Khyber Pakhtunkhwa . The region is divided into two parts: North Waziristan and South Waziristan .

Even before the border was drawn between Afghanistan and British India on November 12, 1893, Pashtun tribes lived in the entire region , whose resistance against the colonial rulers is documented by British punitive expeditions between 1860 and 1945.

The Durand Line , which came about under British pressure and was established for a hundred years in 1893, was intended as a demarcation line, separating Wasiristan from Afghan territory and separating the Pashtun settlement area. This intensified the resistance of the tribes and only four years later led to the revolt of 1897 in Wasiristan. The British viceroy in India then declared the entire region to be a unified " North-West Frontier Province" (NWFP ). The British did not succeed in bringing the region under their control until India became independent in 1947, as the Pashtun uprisings in 1930 in Peshawar and 1936–1938 in Waziristan showed.

When British India was divided into the independent states of Pakistan and India in 1947, a large number of the Pashtuns advocated an undivided India or the incorporation of the Pashtun territories (NWFP and FATA) into Afghanistan. However, this request was not heard.

During the Soviet occupation of Afghanistan (1979-1989), Wasiristan was a sanctuary for resistance fighters tolerated by the Pakistani government.

After the Durand Agreement expired in 1993, Afghanistan insists on the return of these areas (NWFP, FATA and the north-east of Balochistan) from Pakistan, which refuses to return them. For this reason there is no official border between the two countries today.

When the Taliban fled Kabul in 2001 , most of them withdrew to Waziristan, where they could live for two and a half years undisturbed by the Pakistani government. In March 2004, during a Pakistani military offensive in Waziristan, a two-kilometer tunnel system was discovered that led from a mountain range on the Afghan border to residential houses in the village of Kaloosha. Islamic fundamentalist rebels and leading al-Qaida leaders are still suspected of being in the mountainous regions of Wasiristan .

Waziristan has been affected by drone attacks in Pakistan since 2004 . The region is considered one of the main target areas.

In October 2009, after several terrorist attacks in Pakistan , the Pakistani army began a major offensive against the Taliban in both southern and northern Waziristan. This military offensive with at least 28,000 Pakistani soldiers as well as artillery and air support had already been announced in June 2009.

The administrative center and largest city in the area is Miranshah . The area of ​​just under 4707 km² is mainly inhabited by the Darwesh Khel or Wasir tribes, who gave the region its name. They live in fortified mountain villages and farm in the valleys at the foot of the mountains.

The south with an area of ​​around 6620 km² is mainly inhabited by Mahsud tribes who live in tented villages and prefer to raise sheep. The seat of the regional authority of South Waziristan is in Wana . This agency is not directly subordinate to the Pakistani central government, but is administered indirectly through a Pakistani agent - sometimes a Wasiri, sometimes an outsider.

Waziristan is inhabited by 361,246 people in the north and 429,841 in the south (1998). The region is a strictly conservative region, socially and religiously, in which women live carefully shielded and each household is headed by a male tribal resident. Each tribe is divided into smaller tribal units whose village leaders in the jirga deny. Blood feuds are not uncommon.