This article deals with the Indo-Pakistani province. For the film of the same name see under Burning India . 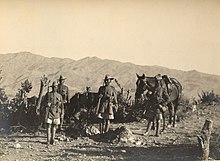 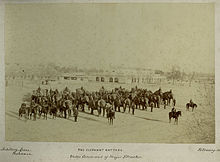 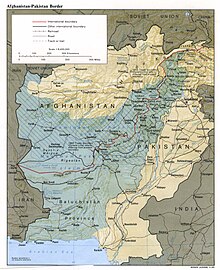 The Durand Line between Afghanistan and Pakistan. The settlement area of ​​the Pashtuns is shown hatched in blue.

North-West Frontier or North Western Frontier Province, NWFP is the former name of a border region in British India . The name of the province became known through the wars with Afghanistan , the many hostilities in this region and the expected conflict with the Russian Empire , the Great Game .

After the first two British-Afghan Wars , the British Empire succeeded in demarcating its colonial possessions in British India (now Pakistan ) from the Emirate of Afghanistan with the Frontier Crimes Regulation in 1872 and the Durand Line in 1893 . The line was named after the then foreign minister of the Indian administration, Henry Mortimer Durand , and was decided by mutual agreement under British pressure. The demarcation line was deliberately laid through the Pashtun settlement areas , which resulted in some Pashtun tribes, such as the Kharoti , being divided and hundreds of Afghan villages separated. About a third of the Afghan territory fell to the British. This intensified the resistance of the tribes and only four years later led to the revolt of 1897 in Wasiristan . The British viceroy in India Lord Curzon then declared the entire region to be a unified North-West Frontier Province in November 1901. The British did not succeed in bringing the region under their control until India became independent in 1947, as the Pashtun uprisings in 1930 in Peshawar and 1936–1938 in Waziristan showed.

Furthermore, the British colonial power pursued the goal of better protecting the north-western border of their territory, what was then British India , against expanding Tsarist Russia by establishing a strategic buffer zone . The British feared that Russia would attack from there for supremacy in Central Asia , the Great Game . For this reason the Anglo-Afghan wars started here. The Russian expansion southward came to a standstill in 1887 when the Afghan northern border was established with the adversary Great Britain, which at the same time was laid down as the demarcation line of the spheres of interest and influence. Afghanistan thus became a buffer state between the two imperial powers, which was confirmed in the 1907 Treaty of Saint Petersburg .

The greatest concentration of units of the British Indian Army was on the North-West Frontier . The most important connections between Central Asia and the Indian subcontinent, the Chaiber and Bolan Passes , lie in this area.

The North-West Frontier in the movie