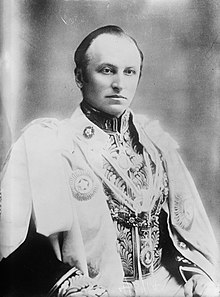 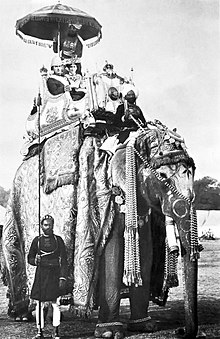 George Curzon with his wife Mary Curzon on the elephant "Lakshman Prasad" in Delhi on December 29, 1902

Lord Curzon as Viceroy of India on an excursion to Dhaka , Bengal (1904)

Curzon, eldest son of Alfred Curzon, 4th Baron Scarsdale , had been a Conservative in the British Parliament since 1886 . The leading representative of imperialism prepared himself for higher things through many years of activity in India . He first became Undersecretary of State in the India Office and the Ministry of Foreign Affairs, then he was appointed Governor General and Viceroy of India in 1899, which he remained until 1905 with a brief interruption. In 1904 and 1905 he was also Lord Warden of the Cinque Ports .

He initiated extensive reforms, including the establishment of the North-West Frontier Province . The partition of Bengal he carried out in 1905 provoked a national-Indian mass movement against the colonial power. He managed to expand British influence to Tibet , Persia and Afghanistan . He created a general directorate for archeology and eightfold the budget for restoration; He cared a lot about the Taj Mahal in particular . During his reign as viceroy two great famines fell (1896–1897 and 1899–1900), in which 6.1 to 19 million people died. Curzon took little countermeasures. Curzon successfully pushed for an extension of his term beyond the usual five years as he wanted to see his reforms succeed - Prime Minister Arthur Balfour later described his approval as his biggest mistake as British Prime Minister. Curzon said that the commander-in-chief should report to the viceroy's military adviser. Lord Kitchener , Commander in Chief of the British Armed Forces in India refused. Curzon asked Balfour to choose between him and Kitchener. Kitchener prevailed; Curzon resigned from viceroy in 1906 and became Chancellor of Oxford University .

In 1908 he became an honorary member of the British Academy .

During the First World War , Curzon was Lord Keeper of the Seal in the all-party cabinet of Prime Minister Herbert Asquith . He was the most widely traveled man who ever sat in a British cabinet - even though a curvature of the spine had forced him to wear a steel corset since 1878. In 1916, Curzon, who was now in the House of Lords and had been a peer since 1908 , became Lord President of the Council under Lloyd George as a member of the War Cabinet . In 1919 Curzon received the long-sought appointment as Foreign Minister ; he held this office until 1924. Lloyd George was the dominant politician of the British delegation during the Versailles Peace Conference ; Curzon also had a good reputation. He was then 'Lord President of the Council' again for around a year. In 1919 a commission of the Paris Peace Conference, to which Curzon belonged, proposed the now famous " Curzon Line " as the border between Poland and the young Soviet Russia . On the Turkish question , it was Curzon's accomplishment to find a solution and prepare the Lausanne Treaty . After Lloyd George was overthrown in 1922, Curzon became the second man behind the Prime Minister in Andrew Bonar Law's cabinet . When Bonar Law resigned because of his illness, Curzon (although he was sitting in the House of Lords) was considered the most promising successor. However, it was passed over in favor of Stanley Baldwin . Curzon remained foreign minister under Baldwin until he was appointed Lord President of the Council and Leader of the House of Lords in November 1924 . In March 1925, Curzon fell seriously ill; after an unsuccessful operation, he died on March 20, 1925 in London.

Curzon's first marriage was from 1895 to Mary Victoria Leiter , who died in 1906. There are three daughters from this marriage. All three ( Mary Irene , Cynthia and Alexandra ) were well-known personalities in the interwar United Kingdom . After a long extramarital relationship with the writer and society lady Elinor Glyn , he married Grace Elvina Duggan , née Hinds , in 1917 . The couple separated after the male title heir desired by Curzon failed to materialize after several miscarriages and Grace, like her two other daughters, had an affair with the British fascist leader Sir Oswald Mosley , the husband of her stepdaughter Cynthia.

Curzon was raised to hereditary nobility in 1898 as Baron Curzon of Kedleston in the Peerage of Ireland . Since it was an Irish title, it was not automatically associated with a seat in the House of Lords . From 1908, however, he was an elected representative peer member of the House of Lords. The title expired in 1925 when Curzon died without a male descendant.

In 1911 Curzon was promoted to Earl Curzon of Kedleston , Viscount Scarsdale and Baron Ravensdale , all in the Peerage of the United Kingdom . As usual, the earliest dignity could only be passed on to male descendants and therefore expired with Curzon's death. The Viscount's dignity received a special note that, in the absence of a son, it could be passed on to his father and his male descendants, which then happened. The note at the barony allowed a transition to the daughters and their male descendants, so that this title passed to the eldest daughter Mary.

Five years later, after the death of his father, Curzon inherited his father's title Baron Scarsdale , who belongs to the Peerage of Great Britain .

In 1921 Curzon was raised to Marquess Curzon of Kedleston with the subordinate title Earl of Kedleston . Those two titles in the Peerage of the United Kingdom expired with Curzon's death.

Curzon Hall, home of the Faculty of Science at the University of Dhaka named after Curzon

Governors General and Viceroys of India