The title of this article is ambiguous. For others with this name, see James Callaghan (disambiguation) . 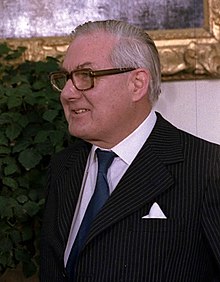 When Callaghan was nine years old, his father, an officer in the Royal Navy, died . He left school at the age of 14 to work as a tax officer. Callaghan took a leadership role in founding the Tax Officials Union and joining the UK Confederation. This work brought him in contact with the Secretary General of the Labor Party , who encouraged him to pursue a political career.

But Callaghan first served in the Royal Navy until 1943 during World War II . In 1945 he was elected to the British House of Commons as a member of the Cardiff South-East constituency. In 1947 he was appointed Parliamentary Secretary to the Minister of Transport. Callaghan was responsible, among other things, for the introduction of the zebra crossing . In 1950 he became a delegate to the Council of Europe .

Callaghan was a member of the shadow cabinet from 1951 to 1964, when the Labor Party was in opposition . After the Labor victory in the 1964 general election , Callaghan was appointed Treasury Secretary (Treasury) by the new Prime Minister Harold Wilson . During his tenure, the British pound had to be devalued (at that time there was a system of largely rigid exchange rates, the Bretton Woods system ). Callaghan then offered to resign, but Harold Wilson persuaded him to stay. In November 1967 he became Minister of the Interior .

When the Labor Party under Harold Wilson surprisingly lost in the 1970 parliamentary election , Callaghan was offered the party chairmanship, but the latter turned it down. On February 28, 1974 , Labor won again and Harold Wilson became Prime Minister for a second time. Callaghan was appointed Foreign Secretary and was mainly occupied with renegotiating the terms of Britain's membership in the European Community (the later European Union ). These conditions, and thus Great Britain's remaining in the EC, were then adopted on June 5, 1975 in the first nationwide referendum in the history of the country.

The Labor Party had not won an absolute majority of the lower house seats in February 1974 (" Hung parliament "); in September 1974 Wilson brought about early elections in October ; Labor obtained a narrow absolute majority (319 out of 635 seats).

In 1975 Callaghan traveled to Uganda as the United Kingdom's emissary to campaign personally with dictator Idi Amin for the life of the condemned British citizen Denis Hills, and, to the surprise of the world, obtained the pardon of the cancer teacher. On July 10, 1975 Hills was able to travel to London accompanied by Callaghan.

On March 16, 1976, Harold Wilson resigned - surprisingly to the public; he suffered from early senile dementia. Callaghan was extremely popular with Labor MPs and was elected as the new party leader and thus also prime minister. He was the first prime minister to head all three key ministries before his election.

"We used to think that you could spend your way out of a recession and increase employment by cutting taxes and boosting government spending. I tell you in all candor that that option no longer exists and in so far as it ever did exist, it only worked on each occasion since the war by injecting a bigger dose of inflation into the economy, followed by a higher level of unemployment as the next step. "

“We always thought we would get out of the recession and increase employment by cutting taxes and increasing government spending. I have to tell you quite frankly: this possibility will no longer exist. If it ever existed, it has only worked since the war by raising inflation, followed immediately by greater unemployment. "

When Callaghan became Prime Minister, the Labor Party still had an absolute majority in the lower house. However, this was lost in the following period due to lost by-elections and party withdrawals. Callaghan was therefore forced to make agreements with smaller parties, particularly the Liberal Party , in order to secure their parliamentary support ( Lib-Lab pact ). In the fall of 1978, the polls for Labor were particularly good and Callaghan could have called new elections. Failure to do so was later seen by observers as the greatest mistake of his political career.

To stimulate the economy, Callaghan wanted to curb the rise in wages. He was able to enforce his ideas for four years, but a fifth time the trade unions refused to accept this measure. After a long series of strikes in the winter of 1978/79 (known as the Winter of Discontent ), the rule was reversed. The consequences of the permanent strike made Callaghan and his government increasingly unpopular. A referendum on decentralization was held in Scotland on March 1st , which the voters supported by a narrow majority of 51.6%. However, due to the low turnout in the referendum, the Callaghan government did not implement the bill. As a result, the government lost the support of the Scottish National Party MPs in the lower house. On March 28, 1979 Callaghan lost a vote of no confidence with a majority of only one vote (310: 311). In the subsequent new elections on May 3, 1979 , the Conservative Party emerged victorious. The Tories party leader Margaret Thatcher became Prime Minister. In 1980 Callaghan resigned as Labor party leader.

In 1983 Callaghan became the Senior President of the House of Commons. In 1987, after more than 42 years in parliament, Callaghan resigned as MP. Shortly thereafter, he was appointed a Life Peer as Baron Callaghan of Cardiff , of the City of Cardiff in the Royal County of South Glamorganshire , and moved into the House of Lords .

To date, he is the only British politician who has served as prime minister as well as finance, home and foreign ministers. He died on his East Sussex farm the day before his 93rd birthday . Callaghan's body was cremated and his ashes were scattered in a flower bed on the Peter Pan statue outside Great Ormond Street Hospital in London. Lady Callaghan had long been the chairman of the board of directors of Great Ormond Street Hospital.