This article deals with the politician, for the historian see Michael Foot (historian) 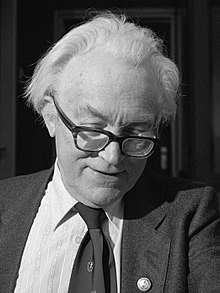 Michael Mackintosh Foot (pseudonym Cato ; born July 23, 1913 in Plymouth , Devon , † March 3, 2010 in London ) was a British politician. He was chairman of the Labor Party from 1980 to 1983. Foot counted alongside Harold Wilson , James Callaghan and Tony Benn to the political veterans of "Old Labor". He is the younger brother of the lawyer Sir Dingle Foot , the liberal politician John Foot, Lord Foot and the former governor of Cyprus Hugh Foot , later Lord Caradon, whose later son was the journalist Paul Foot .

Foot was the fourth son of Eva (née Mackintosh, died 1946) and Isaac Foot (1880-1960). He attended a Quaker boarding school , later Wadham College , Oxford , where he studied philosophy and political science . In 1933 he became president of the student club Debattier-Union . Isaac was a lawyer and founder of the Foot and Bowden law firm in Plymouth . Isaac Foot was an active member of the Liberal Party and Member of the House of Commons for the Bodmin constituency in Cornwall from 1922 to 1924 and from 1929 to 1935, and Lord Mayor of Plymouth.

Still a liberal at university, Michael Foot joined the Labor Party shortly after graduating in 1934. At the age of 22 he stood in the 1935 parliamentary elections in Monmouth , Wales . He became a journalist, working briefly for the New Statesman before moving to the left-wing socialist weekly Tribune , which was set up in early 1937 in support of the Unity Campaign - an attempt to secure an anti-fascist united front between Labor and the parties to its left. Campaign members included Sir Stafford Cripps Labor-allied Socialist League , the Independent Labor Party and the British Communist Party . Foot resigned in 1938 when the magazine's first editor, William Mellor , was fired for refusing to endorse the Communist Party's new policy of supporting a popular front with non-socialist parties against fascism and appeasement .

Through the recommendation of Aneurin Bevan , Foot was hired by the right-wing national newspaper czar Lord Beaverbrook as a journalist at his Evening Standard . It is said that Bevan said to Beaverbrook on the phone, “I have a very young errant knight here. They threw his boss out, whereupon he resigned. Take a look at him. ”In 1940, Foot under his pseudonym“ Cato ”and two other Beaverbrook journalists - Frank Owen , editor of The Standard and Peter Howard of the Daily Express - posted the book Guilty Men to a left-wing book club in which Neville Chamberlain's policy of appeasement was attacked and which became a bestseller.

In the general election in 1945 , he entered the constituency of Plymouth Devonport. For the first time he won a seat in the House of Commons for Labor in this constituency , which he retained until his surprising defeat in 1955 by Joan Vickers . From 1948 to 1952 he returned as editor of the Tribune - a position which he assumed again from 1955 to 1960. By 1957, he was the most prominent ally of Aneurin Bevan, who had taken Cripps' place as head of the Labor Left, even though Foot and Bevan failed when Bevan called for unilateral nuclear disarmament at the 1957 Labor Convention.

Before the start of the Cold War in the 1940s, Foot believed in a Third Way Foreign Policy for Europe; In 1947 he co- authored the pamphlet Keep Left with Richard Crossman and Ian Mikardo . In the face of the Communist takeover of Hungary and Czechoslovakia , Foot and the Tribune took a strictly anti-communist position, occasionally including NATO .

Nevertheless, he was hostile to the Western approach to the Korean War , was an opponent of West German rearmament in the early 1950s and was a founding member of the Campaign for Nuclear Disarmament. During his editorship was Tribune an opponent of the Suez adventure of the British government and the Soviet intervention in Hungary in 1956. His sharp attacks on Charles de Gaulle in his essays earned him a three-year entry ban to France one. In 1960, Foot returned to the House of Commons in the by-election for Ebbw Vale in Monmouthshire , whose seat remained vacant after Bevan's death.

Harold Wilson - Foot wrote a biography about him that was published by Robert Maxwell's Pergamon Press in 1964 - offered Foot a seat in his first cabinet, but Foot declined. Instead, he became the head of the left wing of Labour's backbenchers, stirring up the House of Commons with his rhetoric. He opposed the government's plans to make immigration to Great Britain more difficult, to join the EEC , to reform the trade unions , against the Vietnam War and the unilateral declaration of independence from Rhodesia , and condemned the Soviet suppression of "socialism with a human face" in Czechoslovakia in 1968. He allied himself with the Tory right wing Enoch Powell in an attempt to torpedo the government plan to abolish the suffrage of the hereditary nobility in the House of Lords and to introduce a House of Lords consisting exclusively of lifelong peers - "a seraglio of eunuchs," as Foot called it .

In 1970 Labor turned more to the left and Wilson came to terms with Foot. When Labor returned to government in 1974, Labor became Minister of Labor in the Wilson cabinet, repealed the anti-union laws of the Edward Heath administration and played a major role in the government's efforts to keep the unions by its side. Foot was one of the most eloquent opponents of British EEC accession in the 1975 referendum . When Wilson resigned in 1976, Foot claimed the party chairmanship, but was defeated by James Callaghan . He continued to serve in the Cabinet as Minister for Parliamentary Affairs until 1978. Shortly after his defeat by Callaghan, he was elected vice-chairman of the party, assuming the role of parliamentary group chairman and speaker of the House of Commons, which gave him the inevitable task of ensuring the political survival of the Callaghan government when its majority dissolved. From 1976 to 1979 he also served as Lord President of the Secret Council of State.

Foot as chairman of the Labor Party

After Labor lost the election to Margaret Thatcher in 1979, Foot was elected party chairman in 1980, beating Denis Healey in the second ballot (the last election in which only Labor members voted). Foot presented himself as a compromise candidate, able to unite the party - unlike Healey - which was torn between the grassroots left around Tony Benn and the party right around Callaghan. Benn's supporters demanded vengeance for the fraud they accused the Callaghan government and called for the Labor MPs who had supported Callaghan to be replaced by members of the left-wing who advocated unilateral nuclear disarmament steps , withdrawal from the EEC and extensive nationalization. Benn did not run for the party chairmanship, while the other two candidates - John Silkin , like Foot a "Tribune" employee and Peter Shore , a representative of the moderate wing and declared critic of EEC accession - were eliminated in the first ballot.

When Foot became party chairman, he was 66 years old and in poor health. As a determined opponent of nuclear weapons, he advocated disarmament, renegotiating the EC treaties and, in contrast to Thatcher, who quickly doubled the number of unemployed through its privatization policy , to fight unemployment through further nationalization . Immediately after his election, he faced a massive crisis, the founding of the Social Democratic Party by four prominent party rights (the so-called "Gang of Four"): Roy Jenkins , Shirley Williams , David Owen and William Rodgers . The SDP gained broad media support and for more than a year, polls gave the impression that the SDP could take on Labor's former role and win the general election.

In 1981 Benn decided to challenge Healey as deputy party chairman - a vote that Healey won by the narrowest possible majority - Foot fought at the special party conference in Wembley against the new regulations for the election and de-election of the party chairman for his influence and was criticized from all sides for it. His appearance in the House of Commons during the Falklands Crisis in 1982 earned him the respect of MPs on all sides. (He was, however, criticized by some leftists for being too quick to support Thatcher's immediate military response to deploy the fleet and defend the 2,000 Falcon countries who wanted to remain British citizens.) At the September 1982 ordinary convention, Foot opposed the extreme left his party through. The right-wing newspapers regularly beat him for his unconventional eccentricity, and attacked him for a jacket while laying the wreath at the memorial for Heroes' Remembrance Day, which they called a "donkey jacket". Labor MP Walter Johnson said his party leader looked like an "unemployed Irish dock worker" on the highly official occasion. Foot's careless demeanor damaged his public image and made him appear un statesmanlike. This factor contributed significantly to the 1983 election defeat.

Foot later stated that it was a well-fitting jacket, a dark green coat that he wore over a black suit (bought from Herbie Frogg on Jeremyn Street) to keep from freezing on a cold November day, and that Queen Mom had him because of his Choice of clothing would have praised.

From late 1982 to early 1983 there was constant speculation that Healey would replace Foot as party leader - speculation that grew after the losing Bermondsey by-election in 1983, in which gay activist Peter Tatchell ran, but Labor won the Darlington by-elections and stayed that way Foot chairman of the party until the 1983 general election.

Labor's socialist election manifesto in 1983 called for unilateral nuclear disarmament, higher top tax rates and a return to an interventionist industrial policy. The election manifesto also called for the abolition of the House of Lords and the withdrawal from the EEC by a Labor government. Gerald Kaufman , once Wilson's press secretary and a spokesman for party rights during the 1980s, described the 1983 election manifesto as the "longest suicide farewell letter in history." Tony Blair and Gordon Brown were among the new MPs elected in 1983 to support this manifesto .

The 1983 general election campaign was chaotic: Foot and Deputy Healey disagreed on key defense policy issues and both former Labor Prime Ministers Wilson and Callaghan publicly criticized Foot's disarmament policy. In addition, Foot gave long speeches “in the style of a 19th century radical” at party rallies and practically ignored the modern media of radio and television during election campaigns. The Labor Party lost the June 9, 1983 elections like a landslide in the wake of winning the Falklands War . Foot resigned and Neil Kinnock succeeded him.

Foot took a seat on the Labor Party's back benches after 1983 and resigned from the House of Commons in 1992, but remained politically active. He defended Salman Rushdie , the writer who was the target of Ayatollah Khomeini's fatwa , and took a pro-interventionist position in Croatia and Bosnia against Slobodan Milošević .

In 1995 the Sunday Times published an article entitled “ KGB : Michael Foot Was Our Agent” accusing Foot of acting as an agent of influence for Soviet intelligence. Foot emphatically denied the allegations against him, successfully sued the Sunday Times, and transferred most of the compensation to the Tribune.

Foot remained a prominent member of the Campaign for Nuclear Disarmament until his death. He is the author of several books including highly regarded biographies by Aneurin Bevan and HG Wells . Many of his friends regretted that he had given up literature in favor of politics. Though not a few viewed Foot as the wrong choice as Labor leader , his biographer Mervyn Jones countered that no one else Labor could have stuck together at the time. At Westminster , Foots is remembered with admiration for by far the best debater and great MP, ready for real compromise.

Foot celebrated his 90th birthday in 2003. He remains chairman of Plymouth Argyle FC , the football club he has supported since childhood. On his 90th birthday, his club gave him a shirt with the player number 90.

Foot had no children. In 1949 he married the filmmaker, author and feminist historian Jill Craigie († 1999).