The title of this article is ambiguous. Further meanings are listed under Plymouth (disambiguation) . 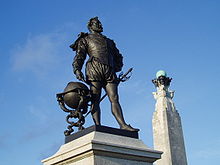 The small port lock at the Barbican, directly at the Sea Aquarium

Plymouth [ ˈplɪməθ ] ( Cornish Aberplymm ) is a city in England in the county of Devon ( south-west England ).

Plymouth is now the location of the Royal British Navy shipyard . The Devonport Naval Base to the west of the city is the largest naval port in Western Europe and Plymouth's main employer.

The city is the seat of the Roman Catholic Diocese of Plymouth .

The city is at the north end of Plymouth Sound . The western city limits form the Hamoaze and the Tamar , which also form the border with Cornwall . To the east, the River Plym formed the city limits, but today the city area also extends east of the river through incorporations. About a kilometer southwest of the city is Plymouth 's Drake's Island in Plymouth Sound.

Plymouth divided including the city center (City Center) in 54 municipalities:

The stone anchor of Plymouth points to traces of prehistoric times .

Plymouth's origins go back to the time of the Anglo-Saxons . A Saxon settlement called Tamarworth is mentioned in the 9th century . In the Domesday Book of 1086 a fishing village called Sudtone is mentioned at the mouth of the River Plym. The name of the old port, Sutton Pool , evokes this settlement. In the Pipe Rolls of 1211 will place as a trading Plym Mouth ( dt Plym estuary.) Mentioned. Plymouth benefited from the silting up of the River Plym, which meant that Plympton , which is located to the east, could no longer be reached by ships and therefore lost its importance. Trade shifted to Plymouth at the mouth of the river, which is why the place grew into a trading town over the next two centuries, which was promoted to market town in 1254 and in 1439 became the first city in England to receive a Royal Charter , which was approved by Parliament . During the Hundred Years' War , the Black Prince set out from Plymouth on his campaign in France in 1355. During the war, the city was raided and looted by the French in 1339, 1377, 1400 and 1403.

From Plymouth, the English fleet started in 1588 to fight the Spanish Armada .

During the English Civil War , the city was on the side of Parliament , which is why it was unsuccessfully besieged by royal troops from 1643 to 1646. To protect the port, but also to secure his rule, Charles II had the citadel built after the restoration of the monarchy from 1665 to 1675 . In 1691 Plymouth Dock was opened as a naval base west of the city on the Tamar. The naval base was expanded with additional docks in 1727, 1762 and 1793. Plymouth Dock became one of the most important bases of the Royal Navy and grew into its own city, which became independent as Devonport in 1824 .

In the 19th century, the size and population of Plymouth grew rapidly due to incorporations and population growth. Between 1812 and 1844, the breakwater in Plymouth Sound was built to protect the harbor according to plans by John Rennie . To ward off feared French attacks, Fort Picklecombe and Fort Bovisand were built as coastal fortifications on Plymouth Sound from 1845 . From 1860 an extensive fort belt was built around Plymouth , which, despite extensions and modernization, was already out of date at the beginning of the First World War. In 1914 the three cities of Devonport, Stonehouse and Plymouth were merged to form the County Borough of Plymouth. In 1928 Plymouth was given city status and in 1935 the first Lord Mayor was appointed.

During World War II, particularly in 1941, Plymouth was the target of 59 Air Force attacks known as The Plymouth Blitz , which bombed the city centers of Plymouth and Devonport. The city centers were rebuilt in the 1950s, and Plymouth became the first pedestrian zone in England. In 1967 Plympton and Plymstock were incorporated. After the county borough was dissolved in 1974, Plymouth was raised to the Unitary Authority on April 1, 1998 .

Voyages of discovery from Plymouth

Because of its location and because of the naval base established in 1691, Plymouth was the starting point for numerous research and discovery trips, including

After the destruction in World War II, the city center around Armada Way was largely rebuilt in a modern style. Since the naval base lost its importance, the city has been trying to become more attractive to tourists since the 1990s.

The main attractions include:

The Smeaton's Tower was in 1759 as a lighthouse on the Eddystone Reef built. At the beginning of the 1880s, the tower was replaced by a new building. The old tower was demolished and about two-thirds of the tower was rebuilt on The Hoe. The tower, still 22 m high, is now used as an observation tower.
The Plymouth Dome on The Hoe was opened in 1989 by Elizabeth II and showed a multimedia show on English seafaring history. However, the house had to close in 2006 and is now used as a restaurant. On the bank below The Hoe is the semicircular Tinside Pool , a seawater swimming pool built in 1935 in the Art Deco style.
At the eastern end of the Hoe is the 17th century Citadel of Plymouth , which is still used by the military today .

The Elizabethan House , an Elizabethan-style building built in the 17th century as the home of a captain or merchant , serves as a museum, as does the Merchant's House , a half-timbered building from the Elizabethan period that shows exhibitions on the city's history.
The Black Friars Distillery , located in a former Dominican monastery, was founded in 1793 and is the oldest still existing gin distillery in England.
The oldest church in town is St Andrew Church . The church was probably founded around 1100. The current building in Perpendicular Style was built in the 15th century and is the largest parish church in Devon with a length of 56 m and a width of up to 29 m. The tower is 41 m high. In March 1941, the church was badly damaged by air raids, the reconstruction took place until 1957. During the reconstruction, it received colorful, modern stained glass windows by John Piper . The church has been a minster church since 2009 .
Charles Church , built between 1641 and 1658, has been in ruins since the air raids on the night of March 21-22, 1941. The former church has been a memorial to the victims of the Plymouth air raids since 1958.
The Roman Catholic Cathedral of St. Mary and St. Boniface was built in the 1850s in neo-Gothic style.
A free-standing portico at the old harbor, built in 1934, marks the Mayflower Steps , allegedly the place from which the Mayflower sailed for America in 1620. Today excursion boats to Drakes Island and the Rame Peninsula as well as harbor tours leave from here.
On the east bank of the old harbor is the National Marine Aquarium , the largest aquarium in Great Britain.
The Royal William Victualling Yard , a naval arsenal built by John Rennie between 1825 and 1831, is already in the Stonehouse district, about a kilometer outside the city center . The food depot for the Royal Navy was housed on the 6.5 hectare site. After closing in 1992, it was converted into a modern business and leisure center.
Crownhill Fort , located six kilometers north of Plymouth, was built as part of the fort belt around Plymouth from 1863. It was used by the military until 1986 and can be visited today.

Plymouth is twinned with